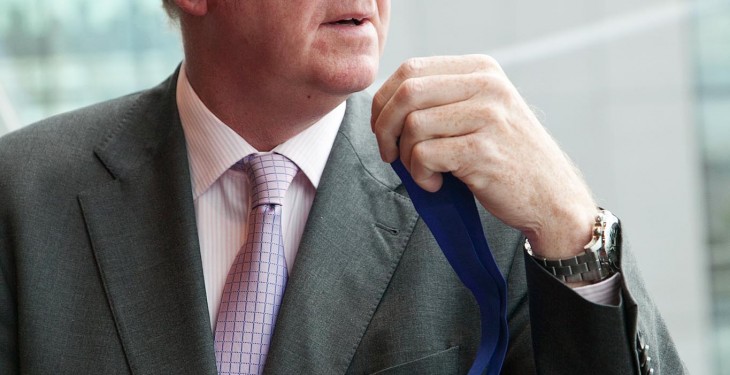 The IEA presented its highest honour the Glanbia man, in recognition of his leadership over the past decade and for growing Glanbia into a leading global nutritionals solutions and cheese group that exports to more than 130 countries.

President of the IEA Colin Lawlor, in his address at the awards lunch, congratulated Moloney of his achievements in the agri-food industry across several decades.

“The Irish Exporters Association is  proud to honour John Moloney for his significant contribution to Glanbia and to Irish exports. John, who has signalled his intention to step down from his position towards the end of this year, has demonstrated enormous vision and leadership in refocusing the Glanbia businesses around key growth markets. In John Moloney’s time at the head of Glanbia, profits have increased from €59.6m in 2001 to €212m in 2012. He is regarded as a visionary by his peers in the agri-food sector – a sector that is a key driver for economic and export-led growth. Glanbia exports to over 130 countries and employs 4,900 people in 17 countries. The Dairy Ingredients side of the business alone (Glanbia Ingredients Ireland Ltd) is the third largest of all indigenous Irish exporters and the number one dairy processor in the country.

He also went on to address the wider issues facing the agri food sector, noting the outlook is bright with strong demand, expanding trade and high prices.

“But this picture assumes continuing economic recovery. If the global economy is not turned around, investment and growth in agriculture will suffer and with it Irish exports, jobs and economic growth.

“The Government needs to continue to create the right enabling environment for growth and trade. The EU agricultural reforms will play  a key role in Irelands agri-food progress in expanding production and improving export opportunities , but must be micro managed by the minister and executives of the department of agriculture , if Irish agri-export industry is to get its full share.

He continued: ‘’The contribution of the agri-food sector to Ireland’s national economy is, to say the very least, of critical importance.  It is one of Ireland’s most important indigenous manufacturing sectors accounting for the employment of some 160,000 people.  Included in this are food and drinks firms that export 85 per cent of our food and seafood to more than 170 countries worldwide.  The sector is indeed, as the saying goes, punching above its weight.  Recent research has shown that Ireland’s investment in agri-food produces a far larger return that investment in other sectors.  The reason is that the sector sources 71 per cent of its raw materials and services from Irish suppliers.  This compares to just 44 per cent for all manufacturing companies.”

“The sector is important and because it is growing fast we can confidently predict that its importance will also grow. Food and drink exports over the past three years have grown by 26 per cent. Last year exports of food and drink were valued at a record €9.2bn.  The Government has set a target for this figure to grow to €12bn by 2020.  To meet this ambitious target we must have continuous growth over the next seven years.

He further added that the marketing environment has rarely been more acceptable to deliver on this an ambitious target.  “There is no doubt that the world needs to increase food production dramatically.  Some say by 40 per cent in the next 20 years and perhaps as much as 70 per cent by the middle of the century to meet the needs of a growing population.  This is the challenge – to meet this growing demand with limited land, energy and water resources while reducing greenhouse gas emissions.  ‘’

He concluded by saying: “Ireland’ s agri-food export sector led by companies such as Glanbia is well positioned to exploit this opportunity for growth and given our ‘green credentials’ we should be able to meet the demands for growth and do so in a sustainable way that meets all of the growing environmental concerns.’’