The Irish Simmental Cattle Society held its Premier Spring Sale in Roscommon on March 11, where bulls made an average price of €3,800.

Selling to a clearance rate of 89%, the average price received by sellers was up compared with the corresponding sale in 2016.

Clonagh Go Go Dancer, the Senior Champion of the sale, topped the day’s trading at a price of €8,700.

The September 2015-born bull is sired by Kilbride Farm Dragoon and was sold by Garrett Behan from Co. Laois. The bull was purchased by R&M Hamilton from Aberdeenshire, Scotland. 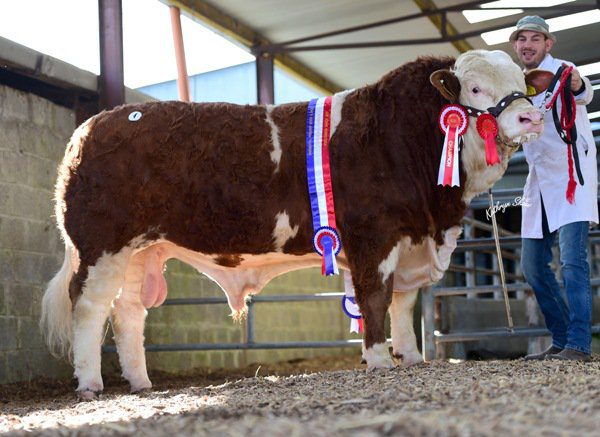 A Curaheen Dickens son, Towerhill Happy Harry, achieved the next best price on the day and was sold by the Aherne Family from Cappamore, Co. Limerick.

The Auroch Bullet P son was purchased by Padraig Fegan, a Co. Westmeath suckler farmer, for €6,400.

The National Cattle Breeding Centre added to its Simmental collection with the purchase of Kickhams Handsome from Michael Keating, Mullinahone, Co. Tipperary.

A number of pedigree Simmental heifers were also on offer on the day, but the average price of €2,460 was down by €500 on the corresponding sale in 2016.

This April 2015-born heifer is sired by Delfur Decider and is in-calf to Samark Superman. She was purchased by JJ and JM Saunders, Newcastle for €2,900.

The November 2015-born heifer is a daughter of Kilbride Farm Dragoon – also the sire of the Senior Champion Bull on the day.

The Reserve Champion, Mount Heidi, was exhibited by Joe Kelly, Ballynacally, Co. Clare and sold for €2,600.

The January 2016-born Delfur Decider daughter is out of a Glebefarm Tyson dam, Mount Carol, and joins the Atlow Pedigree herd of David Donnelly, Derbyshire.

The next Simmental sale will take place in Tullamore on Friday evening, April 7.