Weaving about to fill the chamber; Why not let the baler ‘weave’ for you?

Vicon, part of the broader Kverneland Group, launched a cluster of new products and updates over the past year. Nestled among them was an interesting system that helps operators to make ‘better-shaped’ round bales – automatically.

It’s called AFC (Auto Feed Control) and is available, at least initially, on the firm’s variable-chamber RV 5000 series round balers.

‘Fixed-chamber’ balers tend to be more popular here in Ireland; perhaps Vicon will ‘roll’ out – no pun intended – this driver-aid on those machines too.

Designed to increase baler productivity as well as operator comfort, Vicon says that “AFC takes the stress out of producing even, well-shaped bales”.

What was the problem?

So what was the problem that Vicon set out to fix?

It reasoned – and this will be familiar to some seasoned Irish baler operators – that, when picking up a narrow or small swath, the operator sometimes has to ‘weave’ left or right as he or she drives down the swath. This is done to fill across the entire width of the bale chamber, to ensure that the resultant bale is well filled out – right out to the edge at both sides.

Vicon claims that Auto Feed Control takes over this task. The system gathers data from sensors inside the baler and, instead of simply giving the driver a signal to drive to the left or the right, the system automatically steers the baler to evenly fill the chamber.

It ‘steers’ the baler by automatically adjusting the angle that the drawbar makes with the main body of the baler. Each ‘beam’ on either side of the drawbar can telescope in and out – thus shortening and lengthening – to create this ‘steering’ effect.

The system is patented.

Vicon claims that it can reduce operator fatigue, freeing up more time to concentrate on what’s in front of the tractor – rather than having to constantly gaze out the back window.

The result, says the firm, is higher productivity, better-shaped bales and even slightly improved fuel consumption – though this might be hard to measure in a meaningful way. 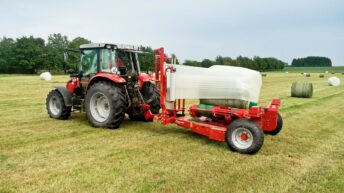