Gloves-looking after your cows and hands – AHI 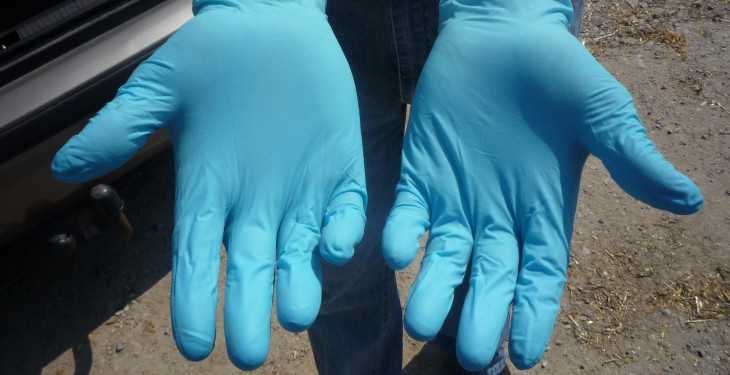 Considering the broad range of jobs you do daily as a farmer, it is going to be very difficult to have very clean hands, according to the AHI.

Yet it says milkers’ hands are an important vehicle for the transfer of bacteria from cow to cow at milking time.

It found wearing gloves during milking can reduce the risk of transferring bacteria in two main ways:

A recent Dutch study showed a bacterial reduction of up to 98% between gloved hands that were disinfected, and bare hands after milking.

Another added, and often underestimated, benefit according to the AHI is the protection that gloves give the skin on farmers’ hands.

It says gloved hands will have less dirt engrained and are therefore easier to scrub clean. The gloves will also protect against direct contact with chemicals, and help prevent the chapping that can occur when hands are constantly getting wet, especially in cold temperatures.

The AHI says milkers that wear gloves generally have hands that are smoother, softer and cleaner….something both you and the people in your life will appreciate!

It’s time to dispel the myth that gloves are for “sissies”!

1. Gloves come in various sizes, so find the size that fits you.

2. Use 2 new disposable gloves for every milking, and replace them if they get torn during milking.

3. It’s easier to put gloves on dry hands before milking, rather than on wet hands when a problem appears.