The event represents the fifth negative auction for prices in a row and the GDT index is now 37% lower than this time 12 months ago.

Average prices paid at the auction fell 2.2% on the last event held two weeks previously which itself was down over 3.5%. 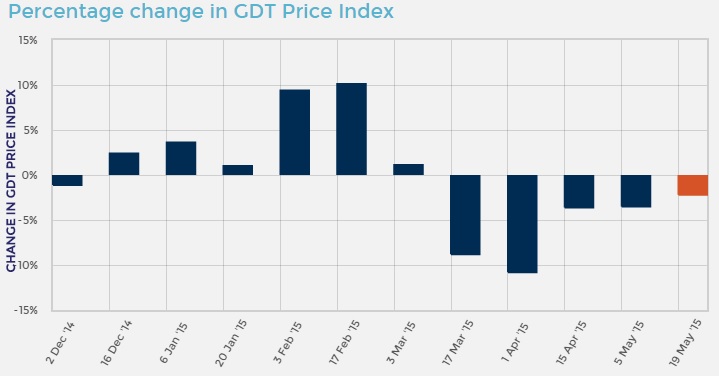 Dairy prices are low and staying there a while longer

After a drought-driven false dawn in early 2015, prices are at their lowest since 2009 and according to Kiwi bank ASB it is expected that prices will remain low over the next few months, before finally lifting in earnest.

It says New Zealand production has got a second wind, with the drought impact turning out modest – we expect production to lift 2% this season from last season’s level despite the drought.

At the same time, milk demand is scarce. Importantly, it says the Chinese economy has struggled of late.

It still expects production growth to slow down so that demand catches up, but this point will come later than previously expected.

Many farmers it says are losing money at current farmgate prices, so dairy production is likely to slow over 2015.

It says the Chinese economy usually responds well to stimulus, but the current weakness may require additional stimulus moves and thus demand may take longer to gain traction than first thought.