Overall and Whole Milk Powder (WMP) prices had fallen 17% and 22%, respectively, over the previous three auctions.

Milk production in New Zealand was down again in October, by 2.7%, this fall is on the back of significant fall September, which was down 7.2% on September 2014. 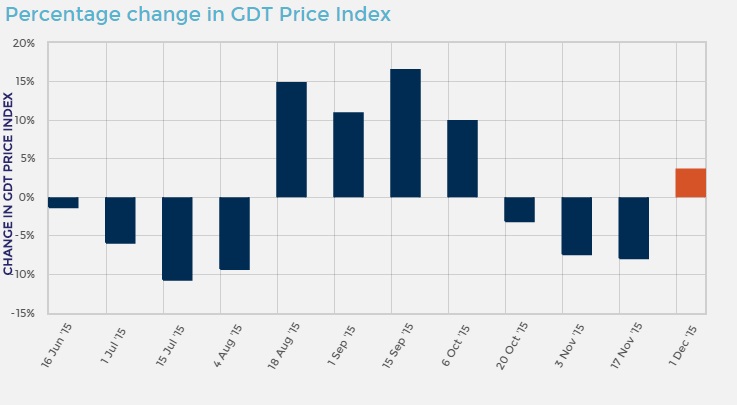 Global Dairy Trade ‘Out Of Whack’ With Dairy Fundamentals

According to Nathan Penny, Rural Economist with ASB bank, New Zealand production so far this season has been confirmed as weak and the outlook is for further weakness.

“We see the current prices as out of whack with dairy fundamentals.

“We do note that the market is factoring in some milk powder scarceness later in the season – prices of later –dated WMP contracts are around $300/MT higher than near-dated ones.

“While we agree with that pattern, the overall price level is still too low,” he said.

Penny said he continues to point out that the market assumption that other producers like the EU will pick up New Zealand’s slack is misplaced.

“Lost New Zealand exports are too big to cover,” he said.

As a result, Penny says once markets come to this realisation (most likely as stocks run down) prices, particularly for WMP, will correct higher. However, this correction may be a month or more away, he said.

In particular, Penny said he’ll be watching for any pick up in Chinese WMP imports for evidence of this correction is about to get underway.