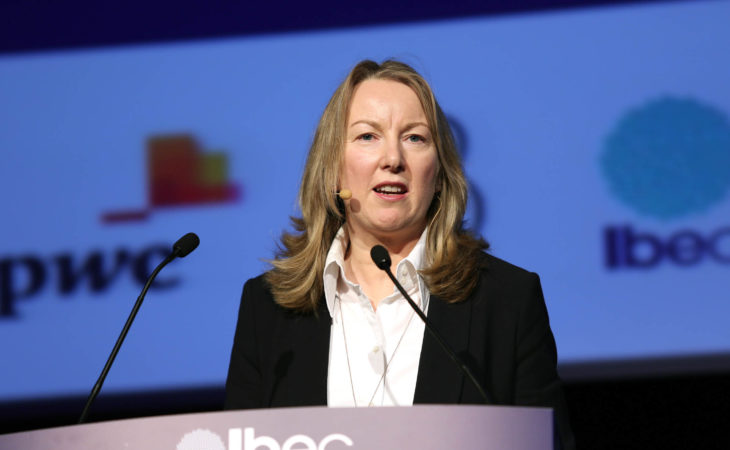 While Ireland is the heartbeat of Glanbia, the internationalisation of the business is fundamental to future growth.

This is according to its group managing director, Siobhan Talbot, who was speaking at IBEC’s annual CEO Conference, entitled ‘From here to prosperity’, at The Convention Centre Dublin this afternoon.

“How do we take Glanbia and indeed our contribution to the Irish economy forward?” asked Talbot to an audience of 400 of Ireland’s top business leaders.

“Our roots are very much in the heartland of the south east of Ireland. We go back to the 1960s and the coming together of different groups of farmers bring their product to market.”

She said from those relatively modest beginnings, Glanbia is now very much a global ingredients and performance nutrition group.

“We have grown to more than €3bn of revenue. We have €3bn market capitalisation listed in London and Dublin. Last year we had €215m of earnings. We have almost 5,000 employees and we export to more than 130 companies.

“It has been an incredible interesting and exciting journey.

Talbot, who took over as managing director last year, explained the business of Glanbia.

“What do we do? Very simply we take a wonderful natural product, milk, and convert it into a suite of products, such as products we all know and love like butter, cheese, milk and liquid milk. And the success of Glanbia takes is that we take it to next level in our ingredients business.”

She added that the nutritional components of milk are a key innovation driver for the organisation.

It is from this base, that Glanbia has expanded its ingredients offering. “High-end nutritional solutions crossing the dairy and non-dairy space and innovation is a key part of our portfolio, where companies can reduce sugar content in food and increase protein content thereby fundamentally playing into healthy trends,” Talbot explained.

In terms of its structure, the managing director noted Glanbia was somewhat unique.

“We now are over 40 per cent owned by 16,000 farmers in the south east of Ireland and a lot of our development was done by raising debt and having a solid relationship with our financiers. That meant that we had to be somewhat creative at times in terms of structure and organisational, so we are very comfortable with the joint venture model.” She referred to its consumer business in Nigeria and its mozzarella model in Europe as prime examples.

In terms of Glanbia’s business journey, Talbot recognised that it has not always been easy.

“Glanbia was created by a merger of Waterford Co-Op and Avonmore in 1997. We had a few tough years immediately post that and really we recognised that we had to change our direction. We had to make some very hard calls. We had to close businesses, digest businesses and fundamentally identified health and nutrition as the area where we wanted to focus.

“We categorised that period in 2000-2004 as earning the right to grow because we had to effectively release capital to invest in the areas we wanted to go to in the future.”

Talbot described the years 2004 to 2013 as very exciting for Glanbia. “And we have further exciting things to do in the future.”

A key milestone for Glanbia at this time was building the largest cheese facility in the world, producing 200,000 tonnes of cheese, in New Mexico.

“The dairy industry tends not to be located in Fifth Avenue or exciting locations but we did change that in 2008 when we went into the branded space and started requiring businesses in California, Florida and Chicago so that has been an exciting journey for us.

“The manifestation of that journey is that the international element of Glanbia has grown 16 per cent in 2000 to over 52 per cent of our revenue in 2012. It is now a far bigger proportion of our profitability.”

“The heartbeat of our organisation is in Ireland and we were delighted to be in a position last year to announced over €200m of investment. There is a great excitement in the Irish dairy industry and we are very excited to be part of that.

“Literally these nights we are out, speaking with our supplier base, meeting with hundreds of farmers every night. There is fantastic enthusiasm about the opportunity that will come when quotas are eliminated and Ireland has a really positive sustainable advantage in that regard.

“And what is that advantage? For quiet simply for those of you who don’t know dairy well, all that rain gives a very high-quality low-cost grass-based dairy system. So we are similar to the New Zealanders who took off like a rocket when Europe didn’t when we had quotas. When we go to meetings now, it is great for us to see there is an entire cohort of young enthusiastic guys and girls who want to take their business forward and it is the first time that the volume cap has been removed from them so they can look forward in terms of that opportunity.”

The Glanbia managing director did caution that there be volatility in dairy prices post quota. “We speak to our young farmers and older farmers about how that volatility has not gone away but dairy is a trade item. The population will be over eight billion by 2025, over four billion of that will be in the developing economy, China currently as an insatiable demand for milk powders. They struggle in their own local dairy production and we believe Ireland can have a big advantage position on that.”

In terms of the contribution of agri-business to the Irish economy, she said this is very much recognised.

“It has a value of about €28bn to the Irish economy of which about €20bn stays within the Irish economy. It is responsible for about one in eight jobs in the country and indeed the plant we are building in Belview in South Kilkenny is the first large-scale dairy facility being built in Ireland in a generation and that alone will put over €.5bn into the pockets of our suppliers directly in the south east.

“We are investing in our brands in the Irish retail scene. We are seeking to bring that brand heritage off the island now, we have a small population here and we are looking at developing long-life milks in the Asian market.”

In conclusion she said Glanbia will continue to grow across the globe. “What we are about is maximising the inputs we get from our supplier base, both in Ireland and the US, and ultimately meeting the need of the consumer who at the end of the day looking for a high-quality, sustainable, good value food product and this is it.

“We are very excited about the opportunities. Like any road it will not be without its challenges but I believe Glanbia as an organisation, as a team, is well placed with all our stakeholders to drive this forward.

“The great team in Glanbia and I are very much looking forward to taking it to the next phase of prosperity.”