Glanbia Co-operative Society Ltd (Glanbia Co-op) has transferred about €92 million worth of Glanbia plc shares to its members.

Coming in the form of a share spin-out, 14,700 of the co-op’s members are set to benefit financially from the decision.

According to Glanbia, the transaction is aimed at releasing a portion of the value of Glanbia Co-op and making it available to members at a time of significant investment on their farms.

Following the completion of the spin-out, Glanbia Co-op will remain the largest individual shareholder in Glanbia plc; it will account for 31.5% of the issued share capital – down from 36.5% prior to the transaction. Based on a share price of €15.71, that shareholding is worth €1.5 billion.

Glanbia Co-op also owns 60% of Glanbia Ireland; the other 40% is in the ownership of Glanbia plc.

The spin-out and the formation of the Glanbia Ireland joint venture were among a number of measures overwhelmingly approved by the eligible members of Glanbia Co-op at a Special General Meeting held in May of this year.

The Chairman of Glanbia Co-operative Society Ltd, Henry Corbally, said: “The completion of the spin-out process represents the substantial completion of a wide-ranging set of proposals which were overwhelmingly approved by eligible Glanbia Co-op members at the Special General Meeting held at the Punchestown Event Centre on May 18, 2017.

“In addition to the share spin-out, members approved the creation of Glanbia Ireland through the acquisition of 60% of Dairy Ireland.

The creation of Glanbia Ireland enables the integration of three strong, well-invested Irish-based businesses to create value for all stakeholders.

“Specifically, it will help to maximise the opportunities created by a forecasted 30% growth in milk supply by Glanbia’s Irish milk suppliers to 2020,” he said.

A detailed information pack, including details of their individual plc share allocations, will be issued to co-op members in mid-September.

On receipt of their Glanbia plc share certificates, shareholders can choose to sell or retain the shares as they see fit, Glanbia said. 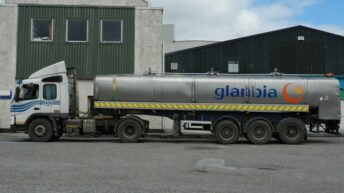