Man fined and has his vehicle confiscated for damaging farmland

A man in the UK has been fined and has had his vehicle confiscated by the police for damaging farmland, according to police in North Yorkshire.

The man, named Mark James Hughes, has been ordered to pay £1,000 (€1,091) in compensation after he caused substantial damage to crops near Thirsk, police added.

Hughes – who is 33-years-old – from Eden Street, Horden in Durham, was found guilty of criminal damage at Northallerton Magistrates Court on Friday, August 25.

The conviction relates to an incident which occurred on November 12, 2016, when a Land Rover Discovery was driven onto a field at Topcliffe.

After the vehicle got stuck – when it was buried up to its axles in mud – Hughes was reportedly seen nearby; he was subsequently interviewed by officers.

The field was due to be replanted in the near future. Because the vehicle had driven over it, the field could no longer be planted – due to the risk of contaminants, the police explained.

During his appearance in court, the defendant was disqualified from driving for six months. This punishment was in addition to having his Land Rover Discovery confiscated, as well as being ordered to pay £1,000 (€1,091) in compensation.

The vehicle was so badly stuck that even a tractor struggled to get it out.

“The compensation, driving ban, and loss of the vehicle will send a clear message that this behaviour is absolutely unacceptable to North Yorkshire’s rural communities, and police will deal with such incidents robustly.” 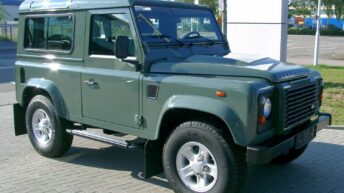