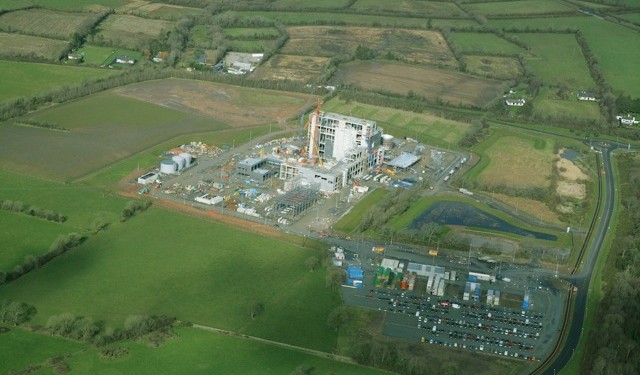 “In addition to strong price growth, GIIL also saw an increase in volumes in the period driven by favourable milk supply. Milk prices broadly reflected the increase in global dairy market prices and EBITA was largely unchanged in the year as a result,” it said.

According to the company, the positive trends in milk supply in 2013 are an early indication of the strong uplift in milk volumes expected following the removal of milk quotas in 2015.

It said in this context, the €150m processing facility under construction in Belview, Co Kilkenny is progressing well and is expected to commence commissioning in late 2014.

Glanbia Group delivered a good performance in 2013 driven by the two growth platforms, Global Performance Nutrition and Global Ingredients. It reported total group revenues including the group’s share of Joint Ventures and Associates were €3.3bn, up eight per cent (10.5 per cent constant currency). Total group EBITA was €226.7m, up 5.6 per cent.

Here is a detailed breakdown of its 2013 results.

Glanbia continued to invest significantly in the business over the course of 2013 with total capital expenditure of €112m. It said this spend demonstrates the Glanbia’s continued confidence in the organic growth potential of the business.

It highlighted the acquisition of Nutramino, a leading Scandinavian sports nutrition business with operations in Denmark, Sweden and Norway, in January 2014 for €25.5m is aligned with the growth strategy of Global Performance Nutrition.

Overall it said the outlook for the Glanbia Group for 2014 is positive.  “While Global Performance Nutrition is expected to be the main driver of growth, we expect solid performance across all segments. On this basis, we are guiding eight per cent to 10 per cent growth in adjusted earnings per share on a constant currency basis for 2014.”

Global Performance Nutrition delivered a strong performance in 2013, Glanbia reported. It said revenues increased by 11.8 per cent (15.7 per centconstant currency) to €655.3m driven almost entirely by volume growth as prices were largely unchanged in the period.

Branded revenue growth was in excess of 20 per cent. EBITA increased 23.2 per cent (27.9 per cent constant currency) during 2013 while margins increased 100 basis points to 10.8 per cent.

According to the company, Global Performance Nutrition continued to outpace the overall market growth during 2013 and we further increased its share within the US.

“This performance was in the face of significant competition and reflects the strong appeal of our brands, our track record of delivering new and innovative products and our continued investment in building the business. We also benefited from our focus on the specialty and internet sports nutrition market sub-segments which remain the largest and among the fastest-growing segments in the market,” it added.

In terms of capital investment at this division during 2013, it said it was significant.

“The implementation of SAP was successfully completed in October. The new €34m production facility in Chicago, designed to allow further capacity additions on a modular basis, is due to be commissioned in the second quarter of 2014. We have already commenced the second phase of capacity expansion in this plant, reflecting recent demand trends and the continued positive growth outlook for the business. On completion, the total investment in the new facility will be approximately €50m,” it noted.

Global Ingredients delivered a good performance in 2013. Revenues increased eight per cent (11.5 per cent constant currency) to €1,074.6m. The group said this growth in revenue is attributable to underlying organic volume growth of 6.2 per cent, higher pricing and an enhanced product mix of 1.3 per cent and the impact of acquisitions of four per cent.

Acquisitions comprised of Aseptic Solutions in July 2012 and a small specialist cheese plant in Blackfoot, Idaho in March 2013.

Cheese prices within the US remained relatively firm throughout 2013 underpinned by strong global dairy prices. Glanbia reported that market demand growth was positive with retail, foodservice and exports all performing ahead of the prior year.

“Against this backdrop, US Cheese delivered a solid performance in 2013. Revenues increased driven primarily by the Blackfoot acquisition and the impact of higher market pricing. This growth in revenues combined with a modest increase in margins resulted in a positive EBITA performance for the year.”

US Cheese commissioned its €8m Cheese Innovation Centre during 2013. “Based in Twin Falls, Idaho, this facility together with the more flexible production capabilities of the Blackfoot plant significantly strengthens our innovation and new product development capabilities,” it said.

Market prices for most of Ingredient Technologies’ dairy related products declined in 2013, the company reported. “Lactose experienced quite significant declines with more modest reductions for other whey-related products,” it said.

“These declines were driven primarily by increased supply as demand across almost all products categories remained firm. Demand continues to be underpinned by favourable trends across the relevant end markets including sports nutrition, nutritional bars and beverages, infant formula and confectionary.”

Glanbia said this relates not only to dairy-based ingredients but also to specialty grains where the recent commissioning of its €22m state-of-the-art specialty grain processing facility in South Dakota significantly enhances its capabilities.

“Also in 2013, we expanded our production capabilities for lactoferrin and dairy calcium, two of our specialty dairy products used in a range of food and other applications,” it said.

The key users of premix solutions include the beverage, breakfast cereal, infant formula, supplement and nutrition bar segments. According to Glanbia, these markets continue to exhibit positive growth while premix providers are also benefiting from the ongoing trend towards food fortification and the increasing desire of large multi-national food companies to simplify their manufacturing processes and supply chains.

It said it continued to invest in this business division in 2013 aimed at growing its presence in new markets, including sales teams in India, Russia, South Africa and Indonesia.

According to Glanbia, Dairy Ireland had a difficult year in 2013 as underperformance in consumer products outweighed a solid performance in agri-business.

It noted revenues increased 3.4 per cent to €652.2m reflecting 2.5 per cent organic volume growth and 2.6 per cent pricing growth offset by the Yoplait franchise disposal in 2012 which had a 1.7 per cent negative impact on revenues. EBITA decreased by 29.1 per cent to €15.1m with a 110 basis point decline in margins.

In line with trends in global dairy markets, the average milk cost for Consumer Products in 2013 was significantly ahead of the prior year as Irish milk prices hit record levels by historical standards, the company reported.

“This resulted in margin pressures as our ability to pass through these input cost increases in a difficult Irish retail environment was limited.

“Overall volumes declined modestly in the year but growth in private label business relative to branded business resulted in an adverse mix effect. This, combined with lower margins, resulted in a significant decline in EBITA,” it outlined.

To counteract the challenges facing the business, Consumer Products recently announced a further phase of rationalisation to improve its competitiveness in the domestic market.

“This includes a reduction in the overall cost base through the redesign of its supply network and restructuring of head-office functions,” the company said.

It also announced plans to build a new €15m UHT (Ultra-Heat-Treated) facility in Castleblayney, Co Monaghan to produce long-life liquid milk and cream suitable for export to markets such as China, Europe and the Middle East. The new facility is expected to be operational in the second quarter of 2014.

On an overall basis, Glanbia said its Agribusiness delivered a solid performance in 2013.  “Demand for feed and fertiliser was positive in the first half of the year, driven to a large extent by poor weather conditions. While the demand trend weakened in the second half of the year, particularly for feed, overall revenue growth for the year was positive,” it said.

The company noted the state-of-the-art oats milling facility in Portlaoise was successfully commissioned in late 2013.

“The plant was developed to supply milled oats for use in the premium US oatmeal brand, McCann’s Irish Oatmeal, owned by Sturm Foods,” it outlined.

While average cheese prices for 2013 were slightly ahead of the prior year, whey prices on average were somewhat behind, the company reported.

“With SWC operating largely to capacity from a volume perspective, the net effect for SWC was a modest increase in revenues and EBITA was broadly in line with the prior year.”

The European mozzarella cheese market performed well in 2013 with demand continuing to be driven by both the fresh and frozen pizza markets, it outlined.

“Market prices were also stronger reflecting demand growth and the general increase in global dairy prices. In this context, Glanbia Cheese delivered a good revenue performance in 2013 and, while milk costs also increased in the period, EBITA growth was positive.”

According to Glanbia, while market conditions remain challenging in the Nigerian market, there were some signs of improvement in demand in 2013 and overall volume growth was positive for the year.

“However, this benefit was largely offset by significantly higher input costs driven in turn by higher global dairy prices. EBITA was largely unchanged in the period as a result,” it said.

“Growth in Global Performance Nutrition continues to be underpinned by our brand strength, our ongoing investment in the business and our focus on the large and growing specialty and internet sports nutrition market sub-segments,” the company outlined.

The company also forecasts Global Ingredients is expected to have a solid performance in 2014.

“Our Idaho-based US Cheese business is currently facing challenges related to increased competition for milk. This is expected to lead to higher milk costs and some year-on-year volume declines in both US Cheese and Ingredient Technologies relative to a strong volume performance in 2013. While the situation continues to evolve, we are managing the overall impact with our suppliers and customers and, combined with a good performance in Customised Solutions, we expect Global Ingredients to deliver a positive performance for the year,” it said.

In terms of Dairy Ireland, it said against the backdrop of an exceptionally difficult 2013, it expects some improvement in performance in Dairy Ireland in 2014.

“This will be driven by Consumer Products primarily reflecting the benefits of the rationalisation measures taken in recent months,” it noted.

“Overall, the outlook for the Group for 2014 is positive. While Global Performance Nutrition is expected to be the main driver of growth, we expect solid performance across all segments. On this basis, we are guiding eight per cent to 10 per cent growth in adjusted earnings per share on a constant currency basis for 2014,” it noted.

2013 was another strong year for its shareholders.

“Glanbia plc share price increased from €8.24 to €11.05. The share price outperformed the FTSE E300 index by 18 per cent and the FTSE E300 Food Producers Index by 26.3 per cent. The strong shareholders return reflects the growth in our core growth platforms of Global Performance Nutrition and Global Ingredients which now represent over 76 per cent of our earnings,” it said.

The company also revealed that investor relations are key to its business strategy over the coming two years.

“We remain strongly committed to open and transparent dialogue with the investor community and 2013 was a very successful year for the Group from an investor relations perspective,” it said.

Glanbia outlined that it had 150 investor meetings in 2013 in Ireland, the UK, mainland Europe and North America among others.