Genomics: ‘Could you please explain why my best cow has only two stars?’ 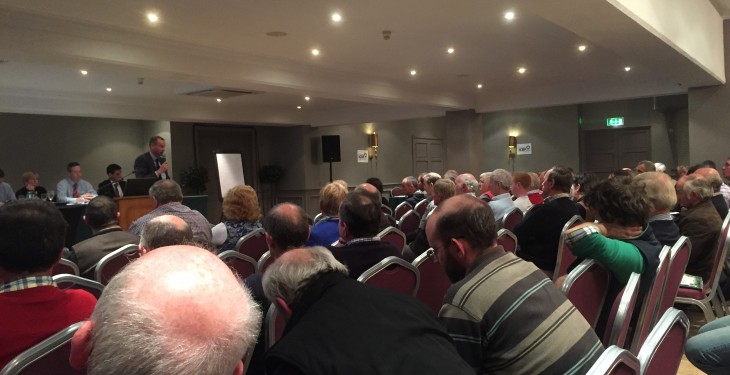 Things got a little heated at a recent Beef Data and Genomics Programme (BDGP) meeting in New Ross, Co Wexford on Thursday night.

The reception for both the Department of Agriculture and ICBF indicated that farmers are quite slow to warm to the new EU-funded suckler scheme.

Over 200 farmers attended, but the majority of farmers present seemed quite displeased with a number of factors in the scheme, including the Eurostar ratings, duration and the tagging process.

One farmer, in particular, was noticeably unhappy with the new scheme and that one of the best cows in his herd was classified with a two-star rating.

The farmer openly asked Sean Coughlan, CEO of ICBF, to explain why this cow had such a poor rating despite outperforming her comrades in terms of durability, longevity and production.

“Could you please explain to me why my best cow has two stars?” asked the farmer.

In response, Coughlan said that this has occurred as none of the animals ancestors had been recorded.

This farmer was not alone. At the recent Genomics meeting in Elphin Mart, Roscommon, a number of cattle were shown to farmers to point out the difference between the different ratings.

However, farmers, especially those who owned the lesser cattle, were not happy to hear that the cow that had produced good calves year in, year out, were not being rated as well as others.

Other disgruntled farmers in New Ross, were unhappy with the duration of the scheme. One elderly farmer voiced his concerns regarding his old age and the scheme’s duration.

“I might not be around in six years time and looking around the room tonight there are not too many under 60.

“Why couldn’t the scheme be for one year and we would move forward from there?” he asked.

In response, a representative from the Department of Agriculture said that if this did occur force majeure would be cited as the reason and the farm would be excused from the scheme.

Gordon Conroy of the Department added that the duration of the scheme was set by the EU as it is classified as an agri-environmental scheme, so the Irish Department of Agriculture had little influence over this.

Another farmer in the audience questioned the impact the scheme would have on parents considering passing on the farm to a son in the next couple of years during the scheme.

In response, the Department of Agriculture’s Carol Delahunt said such incidences would be dealt with on a case-by-case basis.

Farmers also voiced their concerns over the tagging process involved, with one farmer questioning why there was still a need for two tags (identity and testing tag).

In response, the Department’s Gordan Conroy said that two tags will be required for the first year of the scheme, but they are in the process of reducing this down to one tag the following year.