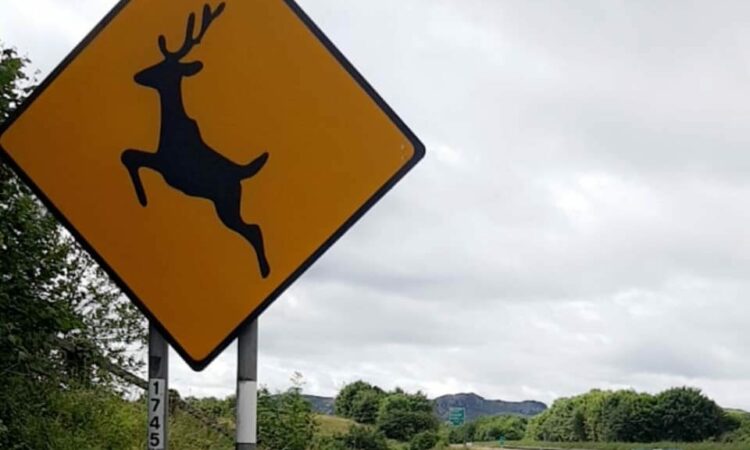 Gardai have issued a warning to rural drivers to watch out for deer in rural areas displaying deer signs, following a recent accident in Co. Sligo over the weekend.

Issuing the warning on social media through the Garda Siochana Sligo/Leitrim Facebook page, Gardai stated: “Gardai attended a road traffic collision today on the main Sligo to Dublin road, on the N4 near Ballydrehid, Sligo.”

Putting it bluntly, the Gardai said: “A car hit a deer. A car that was on the inside lane travelling towards Collooney was unable to avoid the animal as it jumped out across the vehicles path.

Luckily for the occupants it did not go through the windscreen and cause any injuries to the people involved.

“The ‘dear’ deer unfortunately was not so lucky. Anyone who knows the road will see the signs warning for deer in the area, and this accident happened in broad daylight – so beware when passing through Sligo.

“It could end up being a dear drive,” the statement concluded.

On the issue of ‘animal traffic’ on public roads, the Road Safety Authority (RSA) has some basic warnings.

The RSA states: “Always slow down and be prepared to stop when approaching or overtaking animals. If a person in charge of animals gives a signal to slow down or stop, you must obey it.

“Avoid using your horn if animals are in front of you, as it might frighten them,” the RSA advises.

“If you are travelling on a road where animals are common, you will see a warning sign like the ones below.”

‘Driver might get bale’: Gardai stop driver with unsecured load