Members of An Garda Síochána have issued a warning to the public regarding meat that is unsuitable for human consumption amid investigations into instances of theft and the butchering of lambs in fields in recent times.

The crimes occurred in Co. Wicklow, near Newtownmountkennedy, according to Gardaí.

Gardaí in Newtownmountkennedy are investigating incidents where lambs have been stolen and butchered in the fields where they are grazing.

“Cameras have now been put in place in the affected areas.

“Gardaí are working with local farmers, landowners and others in this investigation and are asking the public to report any suspicious activities in the area.”

Anyone with relevant information is asked to contact An Garda Síochána’s Bray Divisional Headquarters on: 01-6665300.

There is also a public health aspect to this as the animals had been recently treated with medication that renders the meat unsuitable for human consumption until it dissipates.

“Please only purchase lamb from trusted sources in the area,” the Garda post stressed.

Investigations are underway following the theft of a Toyota Land Cruiser from a yard in Co. Tipperary, according to An Garda Síochána.

“At approximately 8:30pm Sunday, June 7, Gardaí responded to an incident of theft of a vehicle from a property in Grange, Clonmel, Co. Tipperary.

A jeep was stolen from the property belonging to a male in his 80s.

An investigation into the theft is ongoing, the Garda spokesperson concluded.

The vehicle in question is silver in colour, has a bullbar and possesses a registration plate bearing: 03-LH-958. 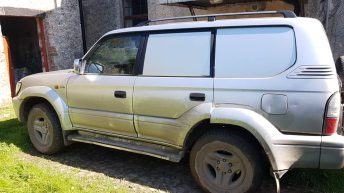