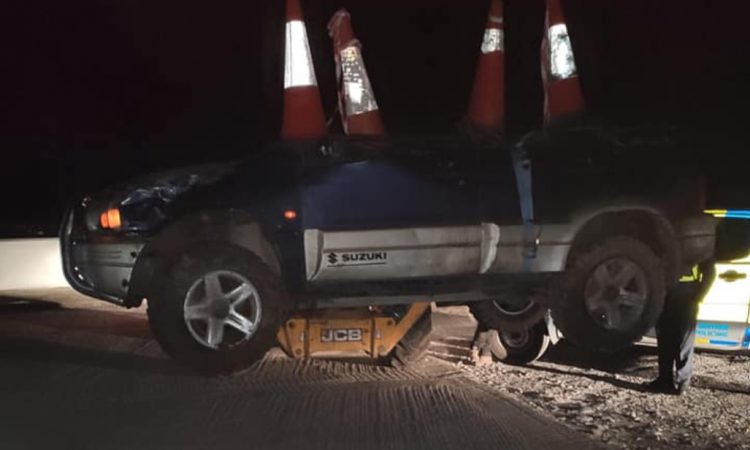 Members of An Garda Síochána were in for a surprise in the early hours of this morning, Friday, March 27, when they came across a JCB moving a crashed 4X4.

In a short statement on the matter on social media, Gardaí based in the Laois/Offaly division said:

“Laois Roads Policing Unit were on patrol between Rosenallis and Clonaslee when they came across a crashed Suzuki jeep being carried on the forks of the digger at 2:00am in the morning with no lighting.

The driver of the digger was unlicensed and not insured. Obviously highly dangerous.

Investigations are ongoing following the theft of 15 ewe lambs, as well as a galvanised gate from a farm in Co. Derry earlier this month, according to the Police Service of Northern Ireland (PSNI).

In a statement on social media, members of the PSNI based in Foyle said:

“We are currently investigating the theft of 15 Suffolk-cross ewe lambs and a 14ft galvanised gate.

The theft occurred between 3:00pm on Sunday, March 15, and 7:00pm on Wednesday, March 18, at a property on Carnanreagh Road, Claudy.

“Can we please ask that if you saw anything or anyone acting suspiciously in the area to please give us a call on 101 quoting police reference number 314 of 24/03/2020.”

The officers added that, alternatively, anyone with information can report anonymously through Crimestoppers on: 0800-555111.