Gardai have begun investigations in relation to the theft of a livestock trailer from a farmyard in Co. Wicklow in recent days.

The trailer was stolen on Wednesday night (March 13) from a yard in the Moneylane area, close to Arklow, in the south-east of the county.

Investigations are ongoing, Gardai have confirmed.

Anyone with information on the implement can contact Arklow Garda Station on: 04-0232304.

Meanwhile, a 4X4 and a trailer were among a range of stolen property that was recently recovered by Gardai in the midlands region.

Gardai in Edenderry have also made an appeal for the public’s assistance regarding the theft of a vehicle on Thursday, March 8, between 3:30am and 3:40am.

During the raid a black Nissan Qashqai “142-OY” registered 4X4 was stolen from Meadow Court Daingean. It was subsequently seen travelling in convoy with a black BMW X5 jeep. The Qashqai had a glass roof, according to Gardai.

“We would ask that anyone that may have seen vehicles fitting that description while travelling during the night to contact Edenderry Garda Station on: 046-973-2765; or the Garda Confidential Line on: 1800-250025.” 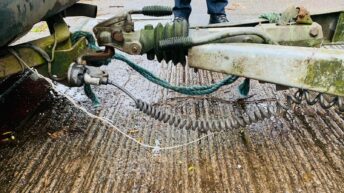