‘French sheep market to pick up in the coming weeks’

Market reports from France suggest that demand for sheep meat will pick up in the coming weeks, given the end of summer holidays, according to the ADHB.

The industry body representing British beef and sheep farmers says demand will also be boosted by the Muslim festival of Eid-al-Adha (September 23), when lamb is traditionally eaten.

Looking further ahead, it says the Christmas period is always one of strong demand, being one of the two seasonal peaks together with Easter.

However, the ADHB also says as French production declines seasonally in the second half of the year and will probably remain lower than a year earlier, then domestic supplies will remain tight.

The sheep trade remains relatively steady despite some increase in supplies reported, according to Bord Bia’s latest update.

However, it says a slow trade was reported across our key export markets.

Supplies at sheep export meat plants for the week ending August 22 stood at around 62,000 head which was up 5% on the corresponding week in 2014. Cumulative supplies for the year to date are currently up 1% on year previous levels standing at 1.56 million head. 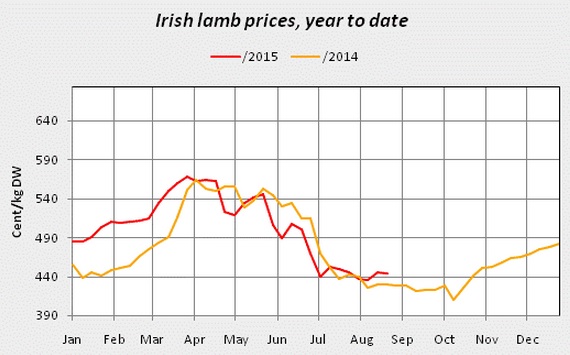 In Britain, Bord Bia says some ease in the trade was reported.

The SQQ live price for lamb in England and Wales was making the equivalent of around €4.43/kg DW towards the end of the week.

In France, Bord Bia says the trade remains slow due to the holiday season however it also says the reopening of school canteens and the return to work in the coming week is hoped to help the trade.

Focus: A family thresher brought back to life in Tipperary