Farmers in four flood-hit counties accounted for 68% of payments under the Fodder Aid Scheme in 2016, latest figures show.

Some €666,470 in payments were made under the Fodder Aid Scheme in 2016, according to the Minister for Agriculture, Food and the Marine, Michael Creed.

No payments were issued to farmers in counties Dublin, Carlow, Kildare, Louth, Meath, Wicklow and Wexford.

A total of 390 applications were received under the scheme, with 60 of these being rejected by the Department.

Out of the remaining 360 applications that were paid, 68% of those were made to farmers in counties Galway, Mayo, Roscommon and Westmeath. 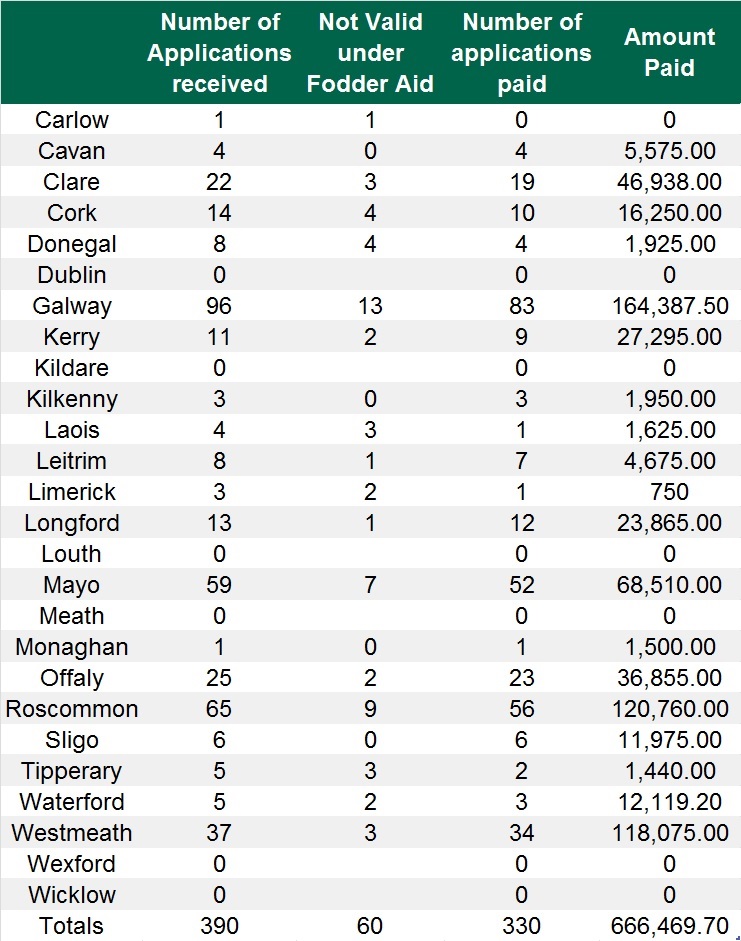 Breakdown of applications and payments under the Fodder Aid Scheme

This amounted to an average payment of close to €2,000 for every successful applicant.

The figures show that farmers from 19 out of the 26 counties received a payment under the scheme.

Minister Creed revealed the figures in response to a question from Fianna Fail’s spokesperson on agriculture, Charlie McConalogue.

A fodder aid scheme to help farmers who suffered damage or loss to animal feed during the December 2015 and January 2016 floods commenced in January 2016.

“Following receipt of aid applications, and the completion of on-farm verification visits to each holding, payments under the scheme issued from mid-February, with all payments finalised by August 2016,” Minister Creed said.

Farmers engaged in the rearing of cattle, sheep or horses and whose feed supplies were damaged by the floods were eligible to apply for support under the scheme.

Eligible feedstuffs included silage, hay, straw and concentrates, while payments were only issued to holdings with livestock.

Losses to other sources of feed on the holding did not qualify for support under the scheme, according to the Department.

Meanwhile, no aid was payable in respect of applications where the total claim was less than €100 or where the flood damage to fodder was covered by the farmer’s insurance policy.