Foggy, cloudy and wet weather is on the way – Met Eireann

This weekend there will be foggy and cloudy weather, with drizzle and rain hitting the country on Sunday, Met Eireann said.

It said that the fog will be slow to clear and may linger until the middle of the day in some midland and western areas.

Today will be another dry day, it said, with sunny spells developing for most areas but cloud will increase in the late afternoon.

There will be highest temperatures today (Friday) of 13 to 16 degrees with light variable breezes or calm, Met Eireann said.

Tonight will be calm, dry and rather cloudy with mist and fog patches forming but cloud will prevent the development of widespread fog, it said.

Looking to the weekend, Met Eireann said that Saturday will be a cloudy day and it will stay dry in most places, with just some patchy drizzle in coastal areas.

It will be cooler than previous days due to the overcast conditions; with afternoon temperatures only reaching 11 to 14 degrees, it said.

According to Met Eireann, winds will be light and variable during the day but in southwestern areas winds will become southerly and increase moderate by evening.

Saturday night will be cloudy and dry for most areas, however in coastal areas of the southwest there will be a few patches of light rain or drizzle later in the night, it said.

There will be lowest temperatures on Saturday night of 5 to 9 degrees, it said in light to moderate southerly backing southeasterly winds.

Sunday will be dull and cloudy with freshening southeasterly winds and rain becoming widespread and persistent in southern coastal counties before spreading northwards across the country later in the day, according to Met Eireann. 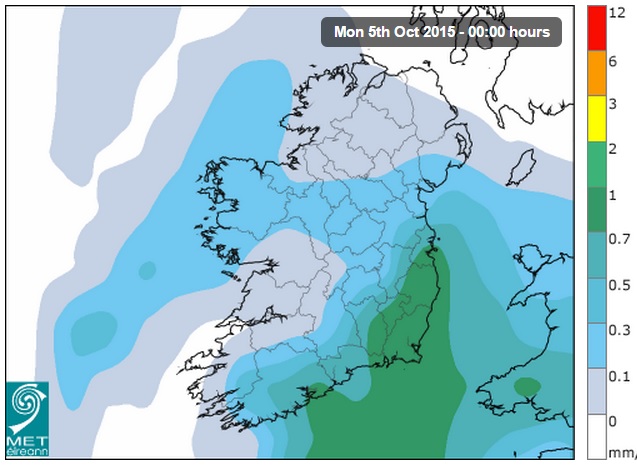 On Sunday, it said that there will be afternoon highs of 12 to 15 degrees in moderate to fresh southeasterly winds, becoming strong and gusty in the southwest.

Looking to next week, Monday will be wet and windy at first with brighter conditions with scattered showers spreading from the south before a band of rain reaches the southwest later in the day, it said.

However, Met Eireann said it will be a mild day with highest temperatures of 15 to 18 degrees in southerly winds, fresh to strong at first, but decreasing moderate in the afternoon.

Met Eireann said that soil moisture deficits are currently around 5-10mm and most soils are trafficable with only some poorly drained soils in the west close to saturated. More unsettled weather from Sunday or Monday with reduce deficits.

Winds will become westerly on Tuesday, fresh to strong on Atlantic coastal counties, and outbreaks of rain will spread eastwards with afternoon temperatures in the mid to high teens, it said.

It's official - we had no summer! Met Eireann says it was 'wet and windy'