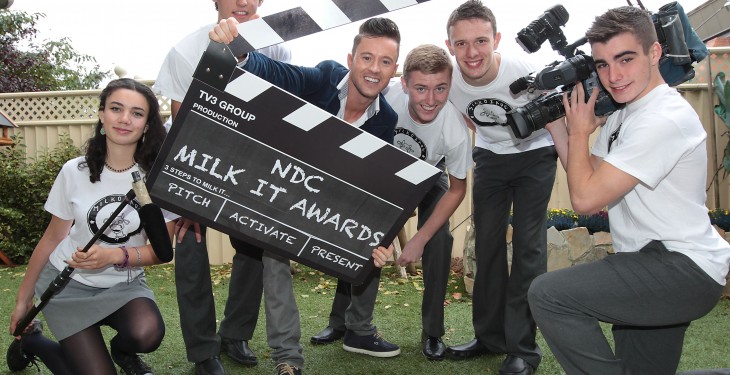 Deric Hartigan, who will be master of ceremonies at the 2014 national finals with last years winners.

Twenty teams of secondary school students from ten counties have been short-listed to take part in the 2014 national finals of the NDC Milk It Awards, with a chance for the winning team to have their campaign transformed into a television advertisement and aired on TV3 and 3e.

A national survey has shown that 42% of Irish teenage girls and 23% of Irish teenage boys have insufficient calcium intakes. The NDC Milk It Awards programme aims to help teenagers learn about the nutritional benefits of the ‘milk, yogurt and cheese’ food group in a fun and engaging way.

Students from 1st-6th year were challenged to set up their own ‘advertising agency’ with up to six team members and to create a ‘Milk It’ campaign based on a brief and guidelines. The team-based national initiative has cross-curricular applications for teachers and students.

A total of 358 school teams from 26 counties initially registered for the 2014 NDC Milk It Awards. This year has seen 1,554 secondary school students actively participate in the first phase of the competition – involving the preparation of a campaign outline and submission to the judges in a two-minute video pitch.

Some 100 teams from 22 counties were short-listed to go through to the second phase of the competition. Provided with web support, media and nutrition guidance the students expanded their projects to show how their creative and strategic campaigns could be activated.

The judges have now selected the twenty teams (10 Junior and 10 Senior) who have successfully won a place at the national finals, to take place in Dublin on 15th May, 2014, as part of National Dairy Week.