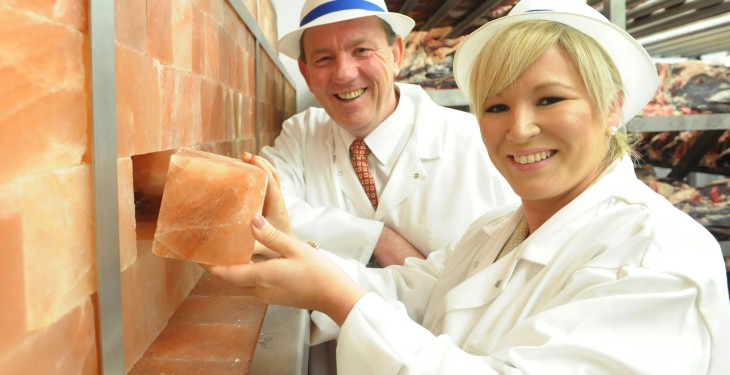 The chamber, which is the largest of its type in the world, was built to cater for the increase in demand for Hannan’s Himalayan salt aged beef. The investment, worth £91,831 sterling, was supported by the EU Processing and Marketing Grant Scheme.

Placing the final salt brick, Minister O’Neill said: “This is a tremendous example of how our Processing and Marketing Grant Scheme supports local companies to grow and attract new customers at the upper end of the food market. Since 2008 the Department has made awards of £18m sterling to 78 projects under the PMG Scheme. In investment terms this represents capital expenditure of at least £45m sterling by agri-food processing companies into the rural economy. I would encourage food businesses wishing to expand to look towards PMG for support and in turn contribute to the economic performance of our agri-food sector.”

During her visit the Minister met with Managing Director Peter Hannan and his staff and heard how Hannans sell salt aged beef to high end shops and restaurants. She added: “We all know that our beef is of the highest quality and this shows how, with innovative processing and marketing, it can achieve recognition as a world class product in the most discerning markets. This is a good news story for everyone involved and one which Hannan Meats and their farmer supply base should be very proud.”

Hannan Meats, based at Moira in County Down and a major supplier of meat to leading hotels and high-end restaurants in Northern Ireland, London and other UK cities, is using the 12ft high solid wall of rock salt bricks to offer foodservice clients dry-aged beef with an exceptional flavour.

The company, which gained a record number of UK Great Taste Awards last year for beef and bacon products as well as recognition for best steak in the European Angus Awards, is curing the meat in a humidity controlled room with a back wall of pink Himalayan salt blocks, the centre piece in a new state-of-the-art processing plant.

The translucent blocks were imported by Hannan Meats from mines in the foothills of the Himalayas in Pakistan’s Punjab region, which date back over 250 million years, in its focus on offering customers in foodservices premium quality meat. Each of the 1,000 salt blocks, were individually hand cut.

The company gained gold stars for 14 of its products at this year’s Great Taste Awards, including a three-star gold for its Moyallon smoked sweet cure bacon chops. It works closely with top chefs, including Mark Hix in London, in creating innovative meat, poultry and fish from Northern Irish suppliers, including organic specialists, for original meals.