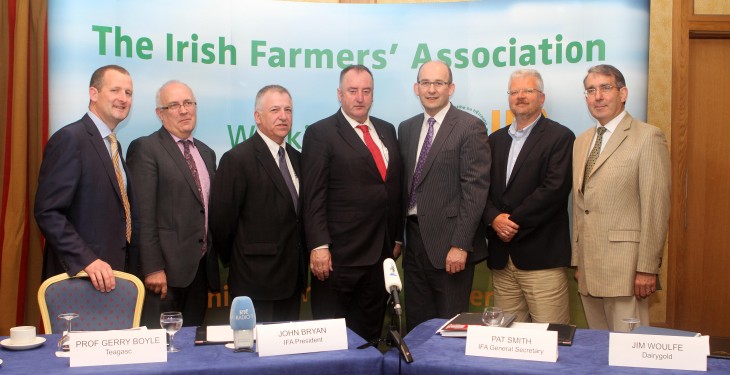 The importance of achieving a deal on cap reform and the Common Agricultural Poilcy (CAP) 2014-2020 was reiterated by leaders in the agribusiness and the Irish Farmers Association (IFA) in Dublin this morning.

“Plans to grow the dairy, beef, tillage and sheep sectors will only be achieved by protecting the single farm payment. We need to keep the focus on food security, job creation and exports,” said IFA President John Byran.

Dailygold CEO Jim Woulfe said the CAP negotiations were crucial to its business in terms  of its 30,000 suppliers and 7,000 farmers.

“Dairy expansion is on the cusp and it will be driven by productive people. Single Farm Payment is a key puller of income.

We see the SFP and its focus on the production sector are critical and a crucial element to harvest 2020, he added.

Dawn Meats’ Niall Browne said it was vital to safeguard direct supports, vital to support the suckler herd, both that are vital for productivity targets for quality-assured beef.

ICOS chairman Seamus O’Donoghue said its organisations main focus was on the family farm, productive family farms irrespective of scale. He said market votalitity was an issue of concern in particular in the post-quota market.

Acron Group Pat Ryan warned that if the SFP was reduced significantly it would be very concerned. “If the single farm payment is reduced significantly, rural Ireland will be affected, more pubs, petrol stations will be closed down, more shops vacated, agri-suppliers and small agri-businesses will go the same way. Every euro given to a farmer has multiple affects on rural community in Ireland,” he said.

Ciaran Fitzgerald, chairman of the Meat Industry Ireland, said CAP reform was of equal importance as Ireland’s corporation tax rate.  “It facilities one in seven jobs in the Irish economy. It is a large provider of employment that links direct payment to active production.

The sector puts in €1.5bn to the Irish economy and is crucial in terms of production and jobs. How payments are spent between 2014 and 2017 and over the next decade are key to whether Food Harvest 2020 targets will happen. SFPs underpins the agri borrowing sector. The Agriculture Minister has to secure a deal for Ireland for the 130,000 farms and 300,000 jobs across the agri-pool,” he added.

The CAP Reform programme is set to be negotiated as early as next week according to some media reports, although this has yet to be confirmed by the Department of Agriculture and/or the European Commission.