Fianna Fáil has committed to introducing ‘island of Ireland’ suckler beef label if voted into government.

“In government, we will work jointly in co-operation with the Northern Ireland executive to advance this proposal as it will be mutually beneficial to all beef farmers on the island. 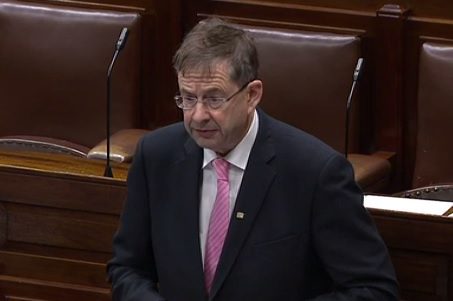 “We are firmly committed to ensuring that the ‘nomad’ status of Irish beef born in the West, reared in the East and South and finished and slaughtered in the North is abolished and that all beef born and bred on the island of Ireland can be sold as Irish beef,” O Cuiv said.

However, current EU consumer regulations stipulate that such nomadic Irish beef cannot be labelled with a single country of origin as cattle reared in Ireland and finished in the North not permitted to be labelled as Irish produce.

O Cuiv says this nomadic phenomenon is being exploited by processors and retailers in abusing market dominance in the food chain and issuing penalties on many farmers producing traditional Irish beef.

Fianna Fáil believes that this is not only unfair dominance in the food supply chain, but goes against the very nature of the EU Single Market.

To deal with this scenario, Fianna Fail proposes that an Island of Ireland label be put forward as a distinct regional geographical area, covering both jurisdictions.

“This regional approach has been successful in the UK with Scottish beef attaining a GI label, while Welsh lamb and beef have also succeeded with such regional labelling applications.

“There has been another significant development with the European Commission brokering an agreement for geographical protection for Halloumi/Hellim cheese for both jurisdictions on the island of Cyprus under an EU protected designation of origin scheme,” O Cuiv says.

He says Irish beef has a long defined history on the island prior to any onset of the current political jurisdictions, with a unique low carbon, high quality grass based method of production over a common land mass.

“Through this policy measure, we are safeguarding a fairer future, improved farm profitability and ensuring beef is designated as Irish if born reared and finished on the island.”