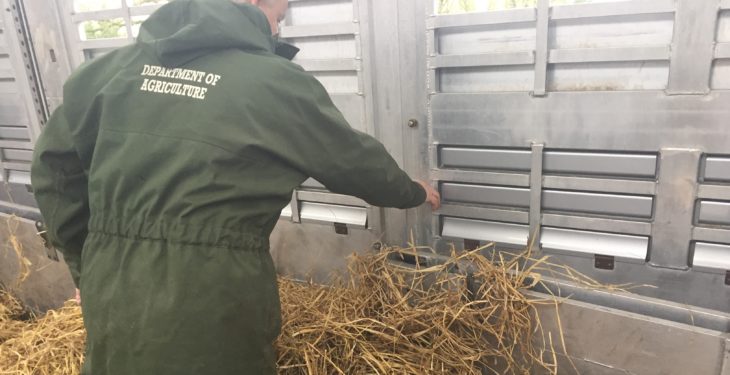 It’s feared farm funding could be lost as department of agriculture officials in Northern Ireland are accused of spending just a fifth of the region’s €744 million Rural Development Programme budget.

The Ulster Farmers’ Union (UFU) accused DAERA (the Department of Agriculture, Environment and Rural Affairs) of inaction and said farmers are “beyond frustrated” with the lack of progress.

It’s the national funding which farmers are at risk of losing. If it is under-spent, it’s feared the funds could be redistributed to other departments.

However, department officials refute the claims saying they have already committed more than a third of the money to various projects.

The Rural Development Programme (RDP) was launched in 2014 with aims to improve agri-food co-operation; environmental sustainability; knowledge sharing; forestry; farm efficiency and rural tourism. The programme is expected to run until 2020.

‘Funding promised will be lost’

Ferguson said: “Since 2014, when the present Rural Development Programme began, DAERA has managed to spend just a fifth of the overall budget.

“We are now facing the prospect that funding promised will be lost to Northern Ireland farmers.

This is inevitable unless DAERA officials focus on what should be the priority – ensuring that in the final RDP before Brexit an impact is delivered for rural families and for rural towns.

“There are no signs whatsoever of key measures in the programme coming into force anytime soon. There are business cases for some of the schemes still not even submitted or approved at this stage.

‘Now a year out of date’

“It will be at least another year before any payments from the Environmental Farming Scheme (EFS) reach farmers. Quotations submitted to DAERA in good faith for Tier 2 of the Farm Business Improvement Scheme (FBIS) are now a year out of date and prices have risen considerably. This must be corrected by DAERA.

“From EFS to the Farm Business Improvement Scheme and the entire Rural Development Programme has been tainted by negativity and failure to deliver.

We are inundated with calls every week from farmers asking for updates. We can give no answer, other than to point to fundamental failings by DAERA.

“These are even more frustrating when there is a political vacuum and no mechanism to apply pressure to officials. Given that the focus of the Northern Ireland RDP is to improve competitiveness and the environment, DAERA has failed to deliver either – more than three years into the programme.”

It compares with the position south of the border, where by the end of this year, the government will have spent around 70% of its €4 billion RDP budget.

Ferguson added: “Our closest neighbour is blazing ahead, taking full advantage of EU rural development funding. If funding is not to be lost, its new year resolution, regardless of the political vacuum, must be to focus on delivery across the entire RDP.”

However, a spokesman for DAERA said: “The UFU’s claim on 2014-20 RDP spend to date is simply not accurate. DAERA would like to make it clear it rejects the union’s assertion that progress has been lacking.

“To date, 34% (or €78.7 million) of 2014-20 RDP funds has been allocated to projects supporting the agri-food industry and rural communities across Northern Ireland – well above the 18% average across the 118 EU Rural Development Programmes of which the top programme has drawn down 38%.

According to the commission, Northern Ireland is in the top five programmes across the EU for declared spend.

“The Farm Business Improvement Scheme (FBIS) – opened two years ago – is delivering a package of measures designed to improve the competitiveness of our farming industry.”

The discrepancy in the figures appears to come from the “actual spend” so far, compared with the “committed spend”.

“Through the FBIS Business Development Groups and Farm Family Key Skills, £4.5 million (€4.09 million) has been allocated to support the farming industry, more than half – (£2.5 million) – of this is going direct to farmers.

Through the FBIS capital scheme over 1,500 farmers do date have shared £7.2 million (€8.15 million) in grants; with a further £1 million (€1.1 million) committed in letters of offer to Tier 2 applicants.

“A further tranche of FBIS – expected to see a further £7.5 million (€8.5 million) in grants distributed to farmers – was announced last week.

“Just over £4.4 million (€4.98 million) has been paid to date under priority six of the Rural Development Programme, creating over 500 jobs across our rural areas; while a further £12 million (€13.6 million) has been committed to schemes promoting rural businesses, tourism, renewal and basic services.

“Through the RDP Monitoring Committee, DAERA has made it clear to the UFU that it has been completely focused on delivering the 2014-20 RDP.”