This week last year the IFA staged the second of its beef crisis protests outside beef plants across the country over low prices.

At that time, the beef price hit a low of €3.50/kg in some plants, with increased supplies and weak European and UK demand blamed for the poor trade.

Beef factories came in for huge criticism at the time for a significant differential in beef prices between the UK and Ireland. At the time the IFA claimed the gap had widened to €350 per animal or €1/kg.

How have prices changed since the crisis?

In general, beef prices are in the region of 6-8% higher than those received by farmers 12 months ago.

While it had been anticipated by many that reduced supplies this year would see beef prices significantly higher than those of 2014, beef prices have remained relatively steady on the back of weaker demand on the continent. 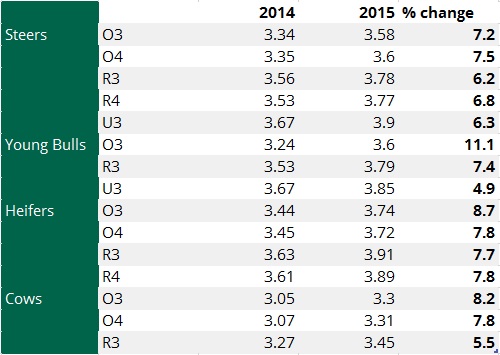 According to Bord Bia, the finished cattle trade continues to remain steady on the back of reduced supply of prime cattle coming off grass.

Little change was reported in the trade across our key export markets.

Last week, Bord Bia says in general, steers were purchased at an average base price of around €3.90/kg on the Quality Payment System with certain lots getting higher quotes.

Meanwhile, the base price payable for heifers was typically making around €4.00/kg with selected lots making 5c/kg more.

These prices exclude the 12c/kg bonus payable on in-spec QA animals. Prices paid for O-grade cull cows were mostly in the range between €3.35/kg and €3.50/kg.

What about prices in the UK?

When compared to Irish prices over the same week UK prices are €1.06 higher. Recent weeks has seen no real change in the dynamics of the UK market with processors more than comfortable with supplies on offer.