There has been a dramatic increase in dairy cow numbers over the past five years. This is mainly due to the removal of the production limitations imposed by milk quotas.

However, suckler cow numbers have somewhat declined over this period. This is particularly the case in heavily-populated dairy areas.

The proportion of calves registered to dairy sires in 2011 and 2016 was 35% and 34% respectively – representing an extremely fertile dairy cow herd.

In spite of this, most of the growth came from calf registrations from traditional sires – particularly Angus and Hereford.

Similarly, the same can be said for Herefords. 120,000 Hereford-sired calves were registered in 2011; this figure has exceeded 200,000 for each of the past three years.

Overall, there has only been a very modest increase in calves registered to pure-dairy sires. 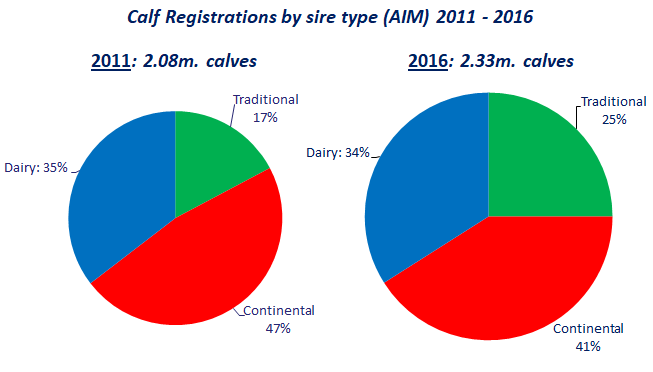 According to Bord Bia’s Joe Burke, farmers have voted with their feet when it comes to making sire choices.

The Bord Bia Livestock Sector Manager said: “They are looking for value in the calf on the ground; farmers have realised that there is an opportunity to make an extra €150/calf.”

“These increases have not just come about because farmers like the look of the black calf or the white headed calf; but they realise the value of the calf and see that there is a demand in the market for this type of animal.

There is a market for these steers and heifers, under 30 months-of-age, with a confirmation of O= or higher and a fat score between 2+ and 4=, through the Certified Irish Angus scheme and the Hereford Prime scheme.

From the processors’ view, dairy progeny are normally angular and poorly conformed. The saleable meat yield is also lower.

Taking a plain, poorly-finished, dairy-bred steer with a confirmation score of P+ and a fat score of 2+; this animal will incur a penalty of 36c/kg at an assumed base price of 380c/kg. That leaves the steer’s price at 344c/kg. 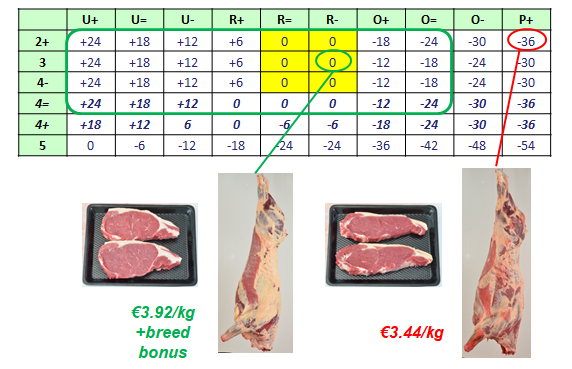 Comparing that to an Angus-sired steer from the dairy herd, a well-finished animal could achieve 392c/kg (380c/kg base price and 12c/kg QA scheme bonus) before breed-specific bonuses. If a 15c/kg bonus is applied, it brings the return up to 407c/kg.

According to Burke, there is scope for perhaps a larger bonus to be secured if farmers are entered into a locked-in contract. This results in a difference of 60c/kg between the early-maturing steer and the dairy-bred animal.

It is vital to note the importance of the steak cuts. The filet, striploin and rump cuts make up 12% of the total weight of the carcass, but can account for a third of total revenue – a huge contribution to the overall price.

Speaking from a market point of view, Burke stated: “The destination of this branded beef is mainly Continental Europe – France, Germany, Italy and Netherlands –  and is somewhat insulated from currency fluctuations.

“This beef has unique selling points, apart from being mainly grass-fed and quality assured, it has excellent eating quality and marbling. These traits secure demand and create markets,” he said.

Video: Behind the scenes on ABP's dairy-beef farm