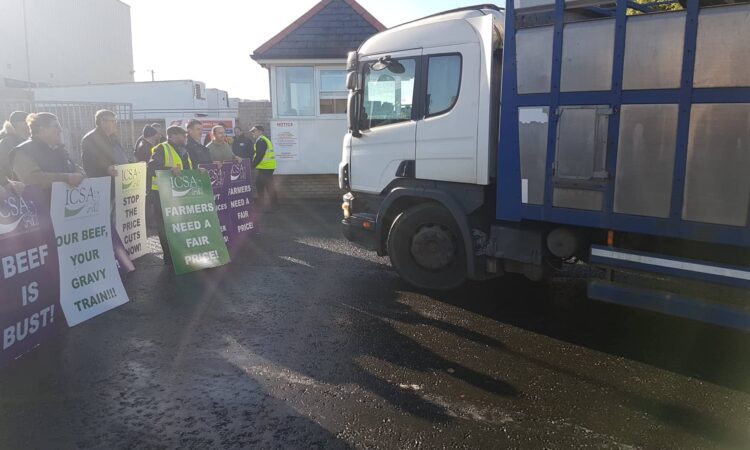 A beef price protest held this morning (Friday, October 5) at the gates of ABP in Clones, Co. Monaghan, drew large crowds of frustrated farmers to reflect the anger at continuous cuts in beef price by meat factories.

The protest was organised by the Irish Cattle and Sheep Farmers’ Association (ICSA) who say the beef sector has been “crucified by beef price cuts” in a year when farmers have substantial extra costs due to extreme weather.

AgriLand was at the event to speak to the protesters and get the attendees’ opinions on what needs to change.

A suckler and beef farmer from Castleblayney, Co. Monaghan, Jim Harrison was there on the day to voice his concerns. 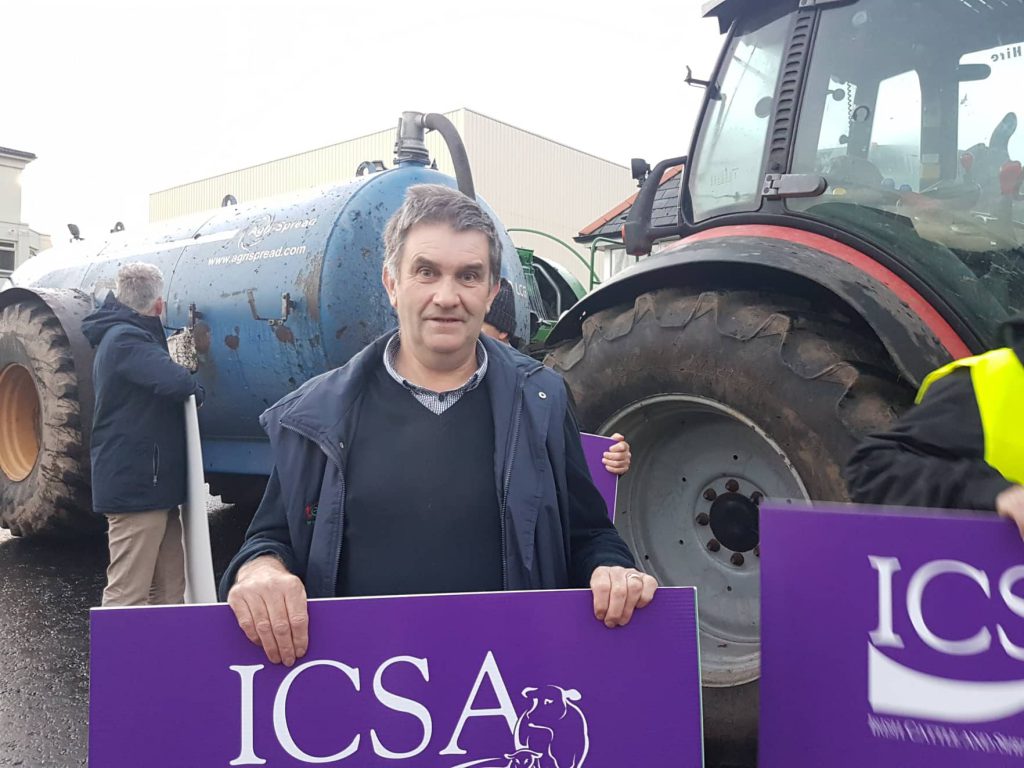 Harrison, who is also vice-president for the ICSA in Connacht and Ulster, outlined that he attended the protest “to support beef farmers in getting the beef price up for the simple reason that it’s currently unsustainable”.

He explained that he had sold cattle in a mart at the end of July and said: “I was taking €150/head less than I was getting – for the same spec of cattle – last year.”

Harrison outlined that he would like to see dialogue from the factories.

Dialogue from factories with beef farmers would be a good start to sort things out going forward.

He believes that the factories are running away from farmers and he called on the meat processors to begin engaging in dialogue with them.

Cavan ICSA chairman Hugh Farrell explained he was at the protest to back the beef farmers who, he says, are “in dire straits at the minute”. 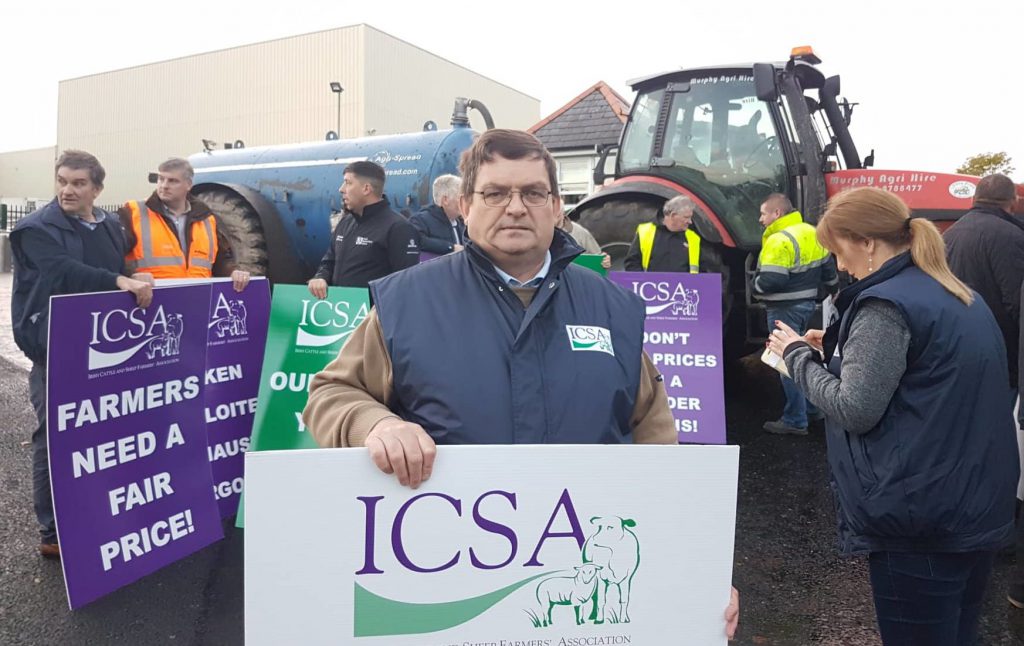 After the weather experienced by Irish agriculture over the last 12 months, Farrell outlined that beef farmers are in need of support from the industry – but he feels that farmers are being let down by declining prices being set by beef processors.

Having sat on the recent fodder forums, Farrell also said that “no representation has ever appeared from the beef industry at the meetings”.

He added that farmers who were protesting today were merely looking for a fair price for their produce.

He outlined that the extended low price period is having effects on farmers’ mental health, as well as their businesses.

“In this end of the country there is a lot of store cattle being sold, and they are hard sold. This is having a massive effect on farmers viability for next year,” he said.

He also believes that the effects of the current low beef price will be felt “further down the road”, as he added that bills are escalating with some farmers still in debt from last spring. 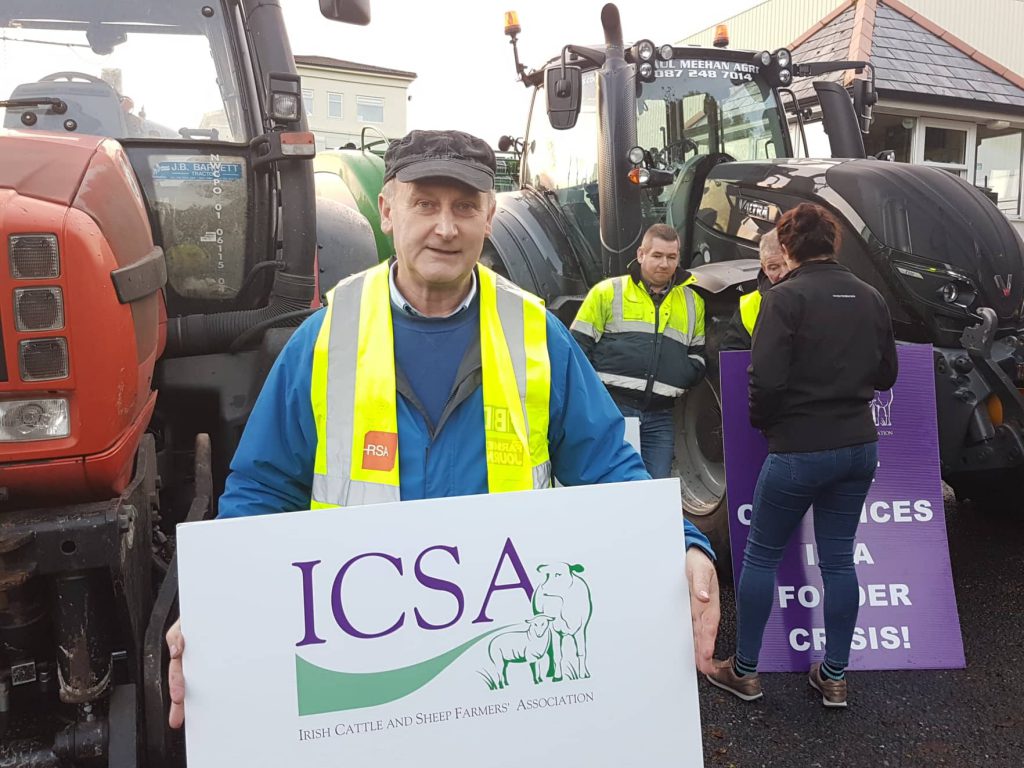 “I am here today in protest over the relentless pull on prices by the cattle factories. They are showing complete disregard for the farmer.”

Grehan says that a pricing strategy needs to be implemented to ensure farmers get fair play, as he stated that “farmers are not getting their fair share of the retail price”.

Some consumers assume that farmers are getting the largest share of the market price for beef.

However, Grehan said that farmers are actually getting “one of the smallest shares”.

He outlined that the annual kill this year is about 47,000 head more than this time last year, but the carcass size is down about 8kg.

Mona O Donoghue Concannon is from Co. Galway and she explained that she was protesting on behalf of women in agriculture who are struggling with the current beef price. 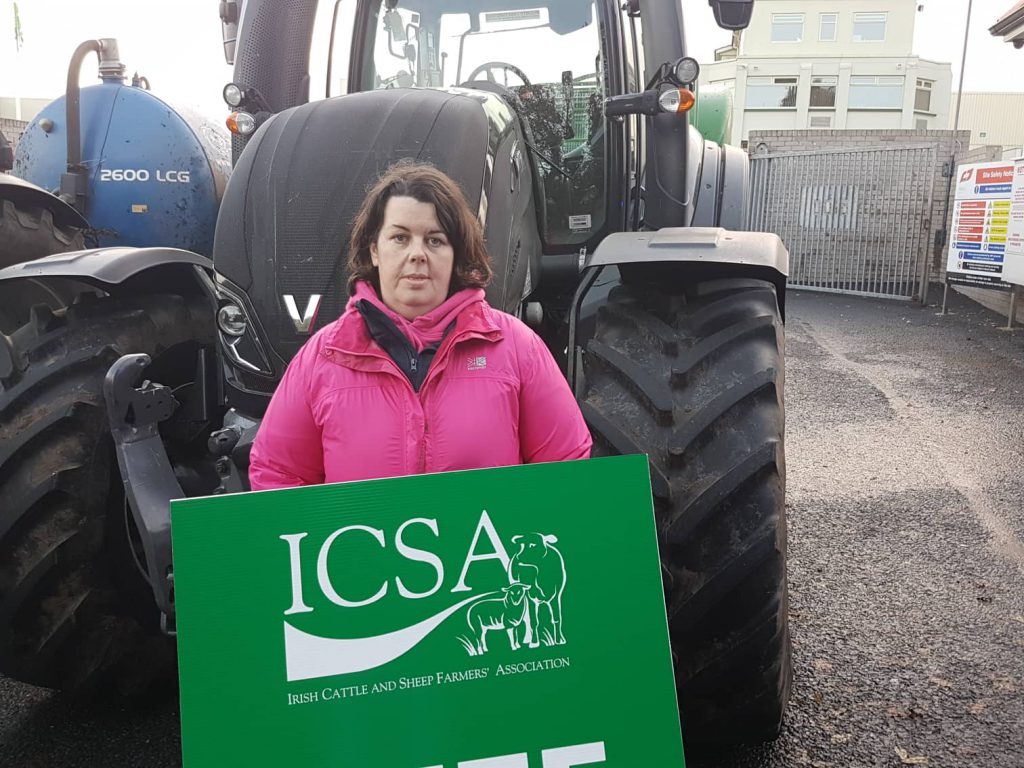 The recipient of the Corrib Oil Lady Farmer of the Year award for 2018 said: “We have to be met somewhere by the factories in getting a fairer price.”

She added that “it is not fair to consistently drop the prices for beef”, outlining that family farms are facing an “increasing struggle” to survive.

If farmers can’t get weanlings sold this winter then there will be a very sad Christmas for a lot of young children.

Lawrence Mc Manus – a beef and sheep farmer – travelled from Pettigo, Co. Donegal, to attend the protest, having left his home at 5:30am. 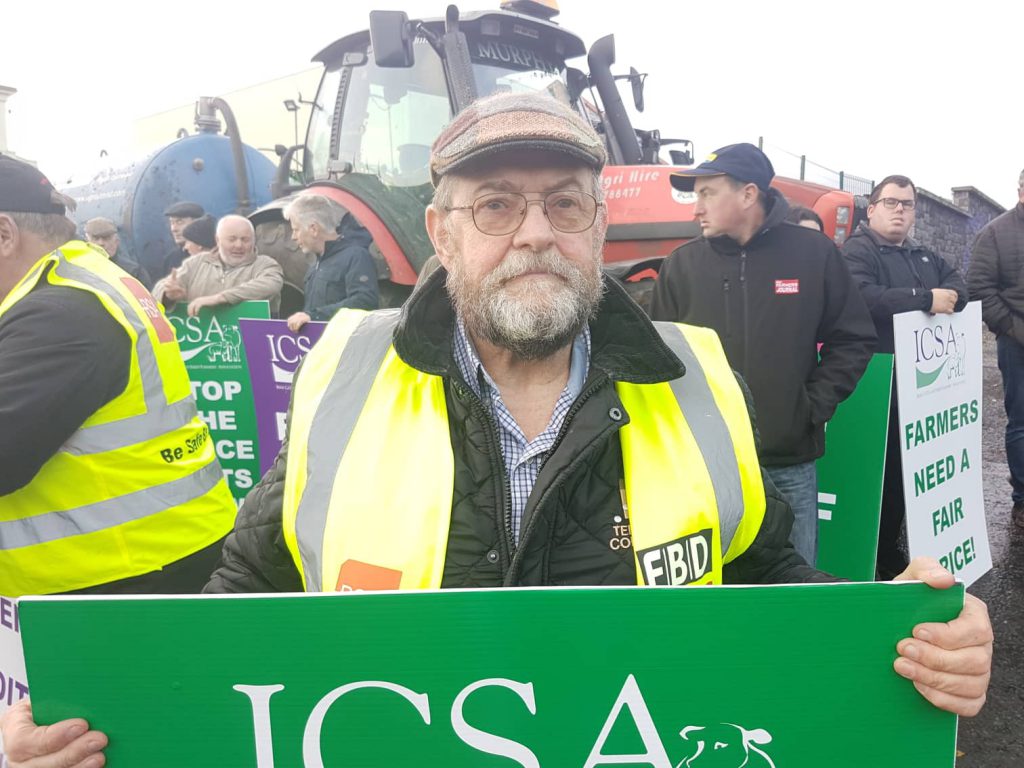 Lawrence believes that it is the small farmers that are really feeling the effects of the current low beef prices and he pointed out that “they are really struggling”.

“It is farmers that are keeping the country going,” he concluded.

Liam Minehan is a beef and dairy farmer from Nenagh, Co. Tipperary. 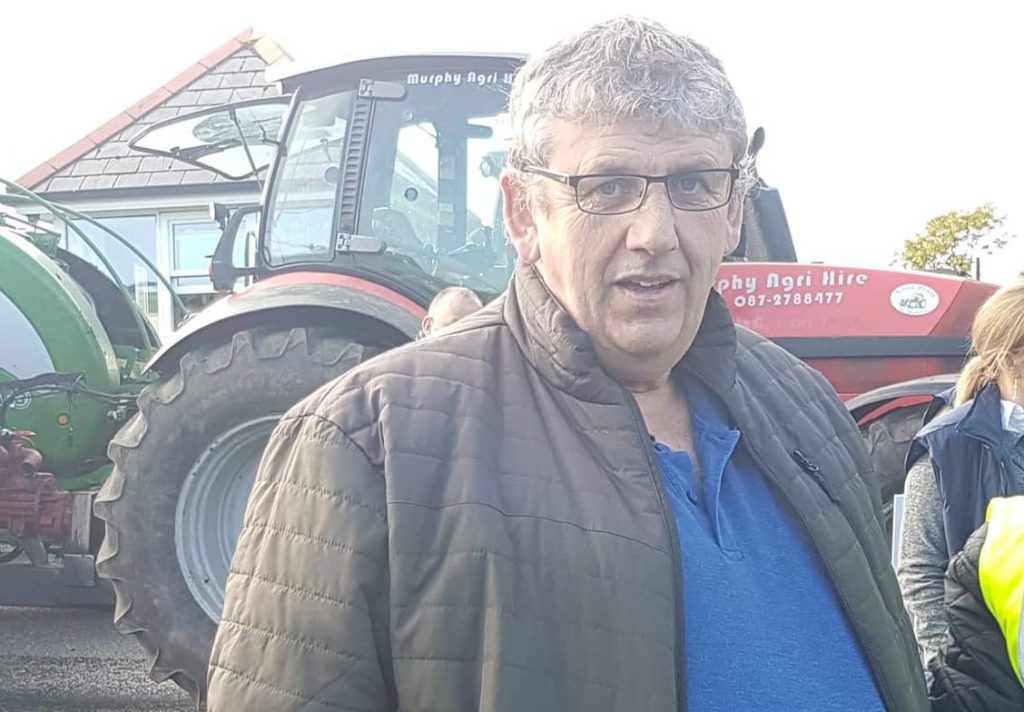 He says he would like to see factories offer farmers a fair price.

“The small farmers are being hammered by factories; it’s almost as if they are not wanted and it is about time somebody stood up and said ‘stop’.”

It is just wrong that, during a time of crisis in farming, factories are going around looking for more nails to drive in the coffin – and that is exactly what they are doing.

He remarked that the dairy co-ops “rallied around and supported their suppliers during a time of crisis, in that they maintained a certain price level”.

Commenting on the beef processors’ tactics, he said: “These guys are just looking for an opportunity; they’re a bunch of opportunists.”

He believes the current pricing system is unsustainable for farmers, but that this tactic works well for the factories.

“They know farmers are struggling and they know the more we struggle, the more ‘under the boot’ we are. Farmers will need to identify a strategy that they will have more power over the factories,” he said.

Meanwhile, the ICSA’s beef chairman, Edmund Graham, is a full-time beef farmer based outside Monaghan town. 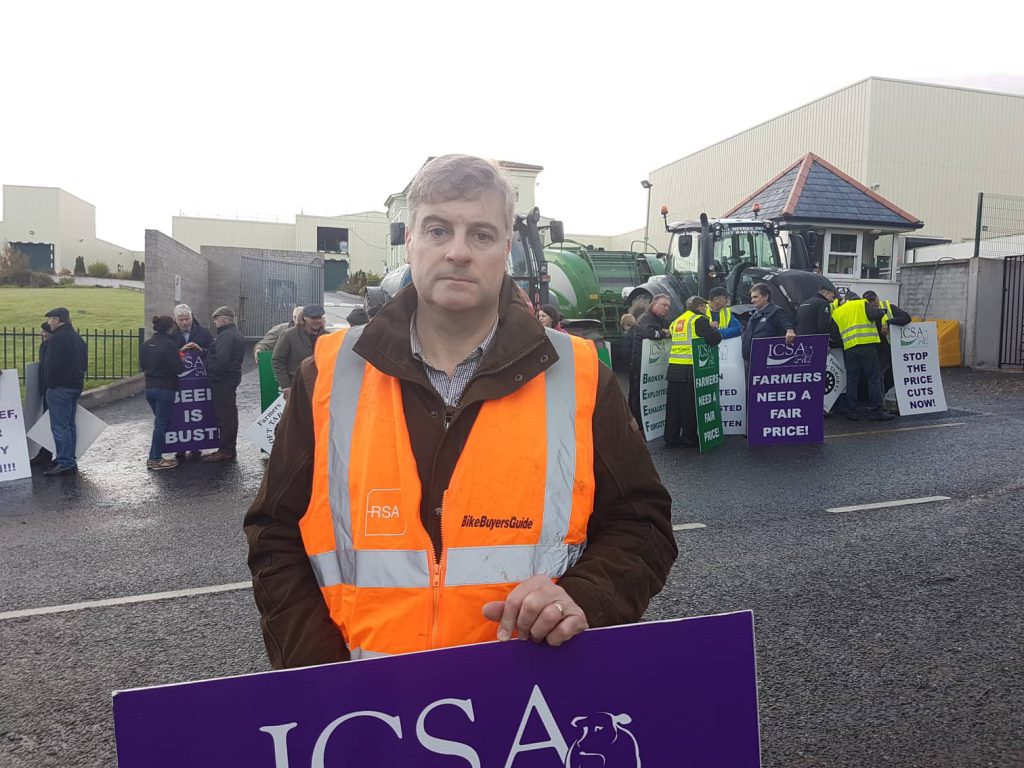 Commenting on the overall situation, he said: “We have come through a tough 15 months of weather and now we are dealing with poor cattle prices. Throughout all of this, the factories have showed total disregard for us.”

He highlighted that factories are pulling prices at a time when “markets have never been as good for beef”.

Markets have opened for Irish beef in the US, China, Japan and more recently Kuwait – and the factories sill insist on ‘cleaning’ beef farmers.

“It wouldn’t take a huge price increase to allow beef farmers to make even a small margin, but currently we are producing below cost and we can’t sustain that,” he concluded. 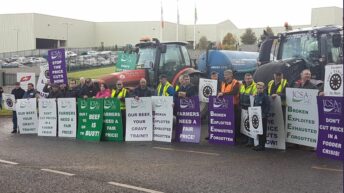