Large parts of the country are in need of rain and, as a result, grass growth rates have dipped over recent days and weeks.

After a prolonged dry spell, farmers in the east and south-east of the country appear to have been affected worst of all; many dairy farmers are now supplementing cows with high-quality surplus bales and concentrates in a bid to stretch out grass supplies.

Met Eireann shows that large tranches of the country are now also running into serious soil moisture deficits; some areas require +70mm of rain to bring the soil moisture content back to field capacity.

However, the chances of these soil moisture deficits abating seem unlikely in the short term, as a Status Yellow weather warning for high temperatures has been issued for the entire country.

On the back of these conditions, grass growth rates have slowed considerably; figures from Teagasc’s PastureBase system show that growth rates of 61kg/ha/day were recorded in Ulster, 50kg/ha/day in Connacht, 54kg/ha/day in Munster and 47kg/ha/day in Leinster. 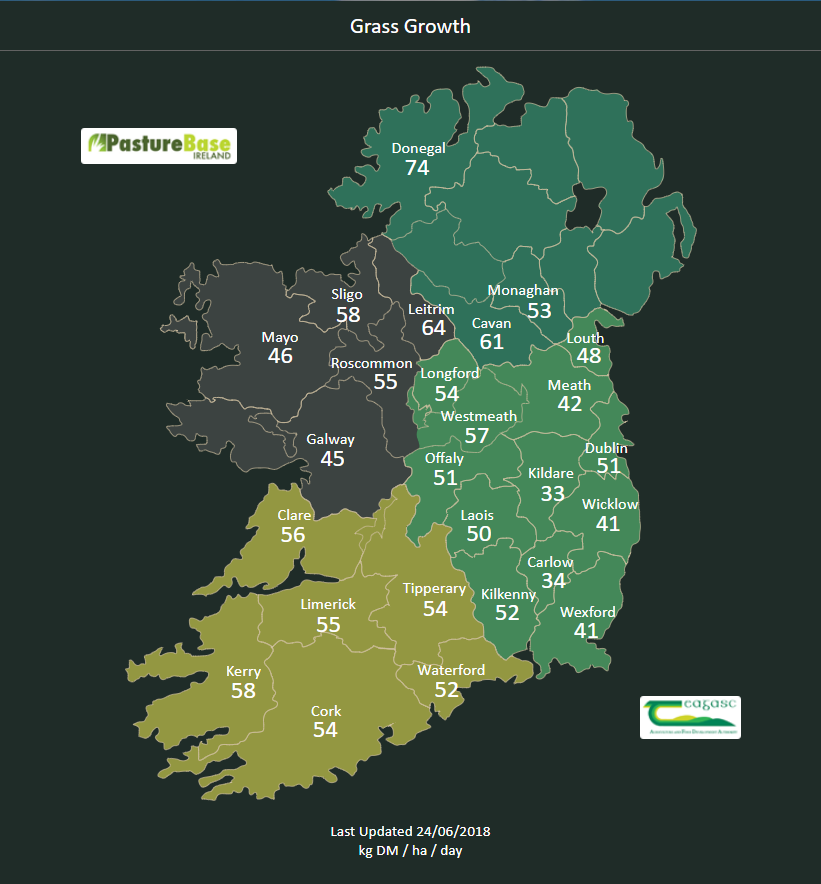 Where feed demand exceeds growth, farmers are having to look at a different feed armoury to get their stock over the dry spell.

Many farmers have opted to increase the rate of concentrate supplementation, others have introduced high-quality surplus bales as a buffer. Zero-grazing light second-cut silage covers (1,200-1,600kg/ha) is also being seen as a viable option by some.

Whatever tactic is utilised, it’s imperative that farmers focus on maintaining production, as a severe drop in milk yield now will have a serious impact on total milk production for the remainder of the year.

Some farmers may be tempted to put their cows on once-a-day milking in a bid to reduce daily demand. However, using this tactic and, in turn, reducing the volume of feed provided to the herd will have negative consequences on production.

To help farmers deal with drought conditions, Teagasc has offered the following advice:

Creed 'rules out' calls for flexibility on THM cutting date

How much water will your cows drink during warm weather?