The final estimates for the outputs, inputs and incomes in agriculture for 2018 has been released by the Central Statistics Office (CSO), showing that the total farmer operating surplus was down 16.8% last year. 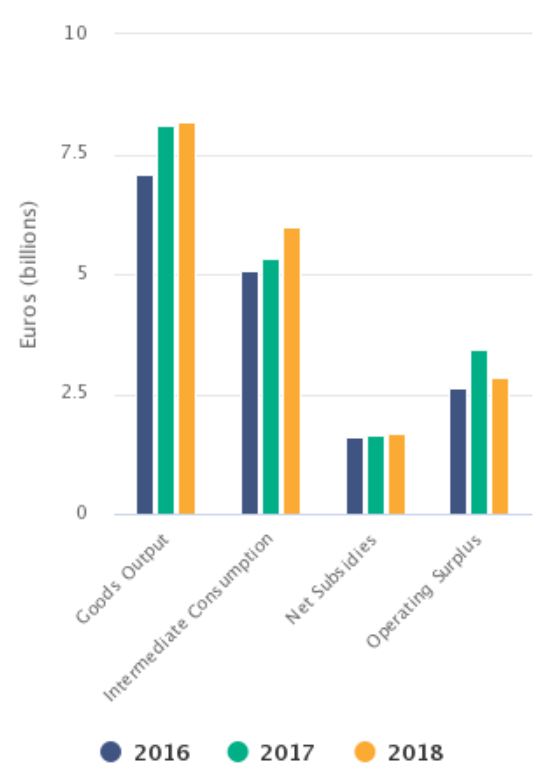 The main costs that made up this increase were feeding stuffs and fertilisers, the input costs of which increased by 26.9% and 13.5% respectively.

These figures represent an increase in feeding stuffs of €356 million, and an increase for fertiliser of €69 million.

Among the other main changes between 2017 and 2018 was that the average value of goods output at producer price increased by €96 million – an increase of 1.2%. This is despite a “very small change” in the volume of goods produced.

While the volume of crops produced by Irish farmers fell, increased prices resulted in an overall increase in output value, rising by 14.6%.

However, milk went in the opposite direction, with output volume increasing by 4.6%, but milk prices falling. This resulted in a decrease in output value for milk by 1.5% overall.

The output value for cattle dropped by 4.3%, representing a decrease of €101 million. This was after a 3.1% fall in the volume of output, combined with lower prices, according to the CSO.

The increase in input cost for feeding stuffs was, as expected, down to an increase in feed consumed on-farm as a result of the harsh weather conditions last year. This increase in consumption was found to be almost 20% higher than the 2017 figure.

The other big expense for farmers in 2018 was on energy and lubricants which, combined, increased in input cost by 8.7% last year.

These figures are the updated version of the CSO’s preliminary estimates for outputs, inputs and incomes for 2018, which was released in March of this year.

This new data is in line with trends shown in the CSO’s short-term indicators on agriculture.