Farmer given suspended jail sentence as livestock ‘left to die’

A farmer who left livestock to die in a frozen field has been given a 16-week jail sentence suspended for 12-months.

The farmer – Stephen Croxall from Kingstone, near Uttoxeter in the UK – pleaded guilty to breaching the animal welfare act.

A report on Staffordshire Newsroom indicated that the charges ranged from causing unnecessary suffering to animals to failing to record the administration of medicines.

When animal health officers from Staffordshire County Council visited the farm on December 31, 2018, they found the animals “in terrible condition”.

According to the report, the livestock were “starving and freezing to death”.

One lamb was hypothermic, and another dead under a fallen gate.

The report noted that “a young calf was also found very vocal and thin, indicating it had not been fed or watered and that several other animals had to be put down”.

The 50-year-old told the court he was “tired from his full-time job as a wood cutter and that vets were too expensive”.

Commenting on the case, Gill Heath, cabinet member for communities at Staffordshire County Council, said: “This is one of the saddest cases of animal neglect our team have had to deal with in a long time.

People who keep any kind of animal have a duty to ensure they are well cared for and kept free from harm, but Mr. Croxall fell very short of this. The sheep, lambs and cattle were kept in a truly shocking state.

“There was also an emaciated calf which must have been there for days. Officers could see its spine.

“Our trading standards animal health officers work closely with businesses and livestock owners to make them aware of their responsibilities and relevant legislation.

Thankfully, the vast majority [of farmers] are responsible and play an important part in Staffordshire’s economy. However, where there is neglect, they will take prompt action like in this case.

Croxall was given the sentence on Monday, September 23, 2019, at Newcastle Magistrates court. He was also ordered to pay £1,000 in costs and given a lifetime ban on keeping animals. 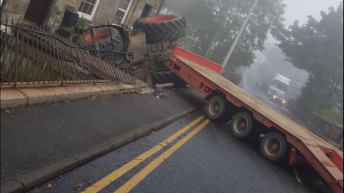 Tractor and low-loader involved in collision with house