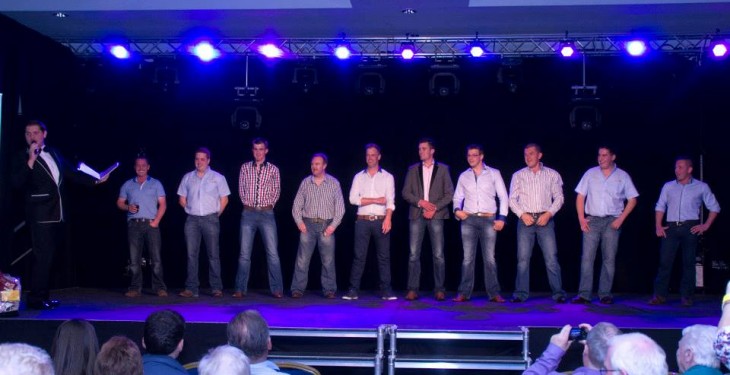 More than 1,000 people attended ‘The Farmer Wants a Wife’ in the Armagh City Hotel on Friday 11 October, to help raise funds for Southern Area Hospice Services.

‘The Farmer Wants a Wife’, which was supported by main sponsor, Tullyherron Farm Feeds and also by the Ulster Farmers’ Union and Alan Milne Tractors, saw 10 local farmers entertain the masses in a bid to win a date with one of the lovely ladies in the audience.

In the end, it was John Patton of Loughgilly who triumphed and got his wife, as well as a £150 sterling voucher from Tullyherron Farm Feeds.  John scored the highest when the audience votes and the judge’s marks were combined. Marty Boyle from Crossmaglen and John Murnion of Hilltown were narrowly beaten into 2nd and 3rd place respectively.  The farmer and his ‘wife’ Sara Donaldson will now enjoy a lovely meal courtesy of Armagh City Hotel.

Kieran Shields of Tullyherron Farm Feeds said “We are delighted to have been associated with this event last Friday night.  We would like to congratulate Anne and the hospice for organising The Farmer Wants a Wife, the farmers who took part and everyone that supported it!  It was a great nights’ entertainment for all while raising much needed funds for the Southern Area Hospice. ”

Orders are now being taken for DVDs of ‘The Farmer Wants a Wife’. They cost £10 each with proceeds going to Southern Area Hospice Services. If you would like to order a DVD please contact Anne on 028 30251333 or email [email protected].

Pictured are the 10 farmers who took part in ‘The Farmer Wants a Wife’ in the Armagh City Hotel on Friday 11th October. Photo Credit: Emma McAnallen