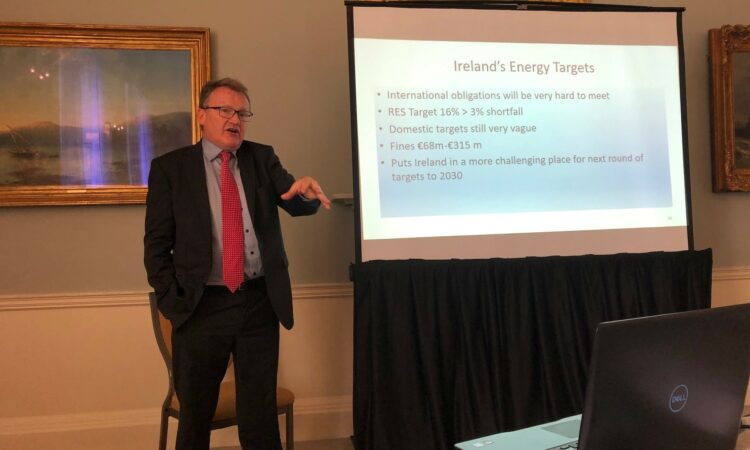 Chief economist Jim Power confirmed to AgriLand this week that he is hopeful he will have compiled the beef review – that he has been conducting on behalf of the Irish Farmers’ Association (IFA) for the last three months – within weeks.

Power was speaking following the launch of his new report: ‘The Role of Ethanol in Ireland’s Climate Action Programme’ which was commissioned by Ethanol Europe as part of the company’s new awareness campaign that seeks to highlight the utilisation of ethanol production as a climate solution.

Power said that Ireland’s international climate obligations were clear – reduce greenhouse gas (GHG) emissions by 20% relative to 2005 levels for areas outside of electricity and to achieve a 16% renewable energy share of gross energy consumption by 2020.

Meanwhile, and as a side to all that, he then pointed to the beef review and added: “I am hoping to bring it all together in the next six weeks.”

‘Everyone wants to talk’

Power says that one of the difficulties he is facing at the moment is that everyone he meets wants to discuss the crisis within the sector and he is anxious that all interested parties are heard.

One of the problems I have is that I am still meeting people and I have gotten incredible interest from right across the country from loads of different people – but particularly from farmers.

He continued: “I’m finding it difficult – at this stage – to call a halt and and say ‘it ends here’ to be honest. I do want to take all the views on board.

“Nonetheless, I do hope that in the next six to eight weeks I will be in a position to bring it all together. I have a couple of meters of research on the subject at this stage to be honest with you.”

Meanwhile, Power pointed to how “very challenged” the sector is at the moment.

He says there are a number of reasons for this…

Beef is a very challenged sector and it would be a fool that would believe otherwise.

He continued: “I mean, if you look at Mercusor; if you look at Brexit; and if you look at consumption trends and then look at the over-supply of beef in Europe because of dairy expansion – everything is raining down on the sector at the moment.

“With regard to Mercusor – and I would hold a slightly controversial view as far as farming circles would be concerned on this – I would say that beef farmers are the main beneficiaries of free trade because 90% of what they produce they export and they are trying to export their product all over the world.

To fly in the face of free trade there is a bit of an irony – but what I do feel very strongly about is that any trade that occurs with Mercusor needs to be done on the same terms.

“That means that Irish and European beef farmers need to be facing the same standards of production as they are forced to.

“There has to be uniformity and I think that it would be grossly unfair to allow beef into Europe that is produced under standards that European beef farmers would not be allowed to produce under.”

Power says that, as far as he is concerned, standards are the big sticking point in the saga.

“That to me is the biggest issue with Mercusor; I don’t think there is anything we can do about free trade but, as I said already, beef farmers are the ultimate beneficiaries of free trade – so it is the standard that is the kernel in my view,” he concluded.