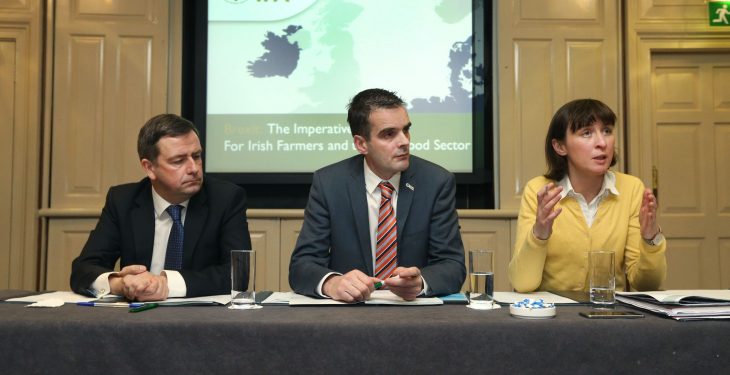 European politicians have indicated that the UK can not get a soft exit from the EU, according to IFA President Joe Healy.

Healy was speaking at the launch of the IFA’s policy paper on Brexit in Dublin today.

The view from European politicians is that the UK can not get a soft exit, as it may send out the wrong message to other Member States, Healy said.

“From European politicians, the view that I have been getting is that they are aware of our dependence on the UK and how we’re exposed to them from a market point of view.

At the back end of last year, the impression that we had was that they had listened to us, they had sympathised with us, but their view was that the UK can’t get a soft exit.

Their view was that a signal can not be sent out to other countries that this is the way to go, he said.

There is no other sector that stands to suffer as much as the Irish agri-food sector in the aftermath of Brexit, the IFA President added.

The IFA is clear that the farming and food must be at the top of the Brexit agenda, not only in Ireland but at EU level, he said.

During the Brexit negotiations the key priorities for the agriculture sector are the maintenance of the closest possible trading relationship between the UK and EU, while preserving the value of the UK market, he said.

The provision of a strong CAP budget following the UK’s departure is also of vital importance, he added.

Healy believes that alternative markets to the UK for Irish produce must be explored and expanded on, if a hard Brexit occurs.

Meanwhile, the IFA’s Chief Economist, Rowena Dwyer, said that Ireland will not be able to look for a ‘special deal’ during the Brexit negotiations.

“The negotiations will look at future trade relationships between the EU and the UK.

“But we can’t look for a special deal for Ireland, as we’re still a part of the EU trading block,” she said.