The AHDB (the organisation for English beef and sheep) has highlighted that there has been some positives for the EU beef market in 2015.

The majority of these positives relate to the ground beef market which mince and burgers rather than premium cuts, it says.

The AHDB says that this has occurred as a result of good manufacturing beef demand, in particular cow beef.

The AHDB says that UK consumers have become savvier in relation to their purchasing decisions with promotions and discounters becoming more important to the UK customers. 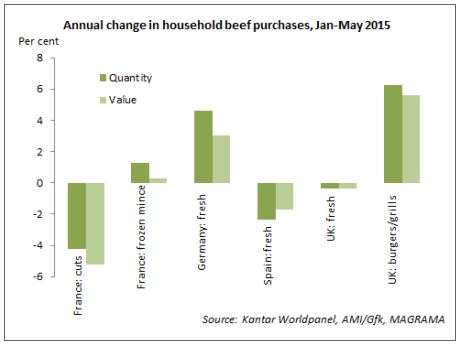 However, UK household purchases of fresh beef have declined marginally in the first five months of 2015.

There has been a small fall in mince sales but prices remain unchanged. It added that the market for burgers and grills has continued to recover and has increased 6% from January to February 2015, it says.

Household beef purchases have continued to decline in France in 2015, which is the largest EU beef market.

Purchased volumes were down by 4% from January to May 2015, having declined by similar amounts in the four previous years, it says.

The AHDB reports that this fall has occurred as the French consumer budgets remain under pressure and this is having a negative impact on the average beef price.

The 5% fall in expenditure has resulted in a 1% decline in the average French beef price. However there has been a significant rise in frozen ground beef purchases from January to May to 2015, it says.

The volume of frozen ground beef purchases have increased 4% in this period as the confidence returns to the industry following the horse meat scandal in 2013.

The AHDB reported that German beef demand started to pick up in the second half of 2014 and this increased demand has also been evident in 2015.

The 2014 beef purchases in Germany were up by 1%, but total growth from the first five months of 2015 has reached 5% as the market was helped by the recovery of the German economy.

This has occurred as the German retail beef price has fallen for year on year from 2012 to 2014, it says.

Despite the increase in retail sales in both France and Germany the Spanish beef purchases have continued to fall.

Volume purchases have decline by 2% in the first five months of 2015 from the corresponding period in 2014.

However, the AHDB says that this reduced rate of beef sales is an improvement on previous years as the rate of decline from 2009 to 2014 had averaged 5%.

This occurred due to the difficult economic situation which had a negative impact on all meat markets in Spain.

The AHDB also reports that the demand for beef in Italy has remained weak. Beef purchases increased by 2% in 2014 but they still have not regained the ground they lost as a result of the previous 5 years of decline.

Italian consumers continue to focus on cheaper cuts and lower priced imported beef and as in other member states are targeting cuts that are on promotion, it says.

The AHDB says that increasing demand will be essential to ensure the future of the European beef market, it also added that an improvement in the economic situation in the major consuming countries is also needed.