The Brazilian meat scandal proved there are “systematic failures” in the controls in Brazil and the EU can no longer credibly rely on the authorities there to certify meat exports to the EU, according to Angus Woods, the Irish Farmers’ Association’s (IFA) National Livestock Chairman.

Woods met the EU Commissioner for Health and Food Safety, Vytenis Andriukaitis, in Dublin this week and he reiterated the IFA’s views on the Brazilian meat scandal.

The EU Commission must withdraw from trade talks with Mercosur while this investigation in Brazil is ongoing, Woods added.

Standards and controls have to be at the centre of any trade discussions. The EU Commission cannot stand over negotiations with Mercosur against the backdrop of the very serious issues raised in Brazil.

Along with Irish MEP Mairead McGuinness, Woods met with Commissioner Andriukaitis at a citizen’s dialogue meeting on health and food safety in Dublin Castle.

Speaking at the meeting, Andriukaitis acknowledged the seriousness of the issues facing the EU meat market and he admitted that there were major problems in Brazil.

Federal agents raided the operations of Brazil’s largest food companies back in March, over accusations that their employees oversaw bribing of inspectors to allow rotten meals to be served in public schools and salmonella-contaminated meat to be exported to Europe.

The so-called ‘Weak Flesh‘ investigation, which spanned over a number of years, broke on March 17, causing a total of 45 nations to implement some kind of restrictions on imports from Brazil. 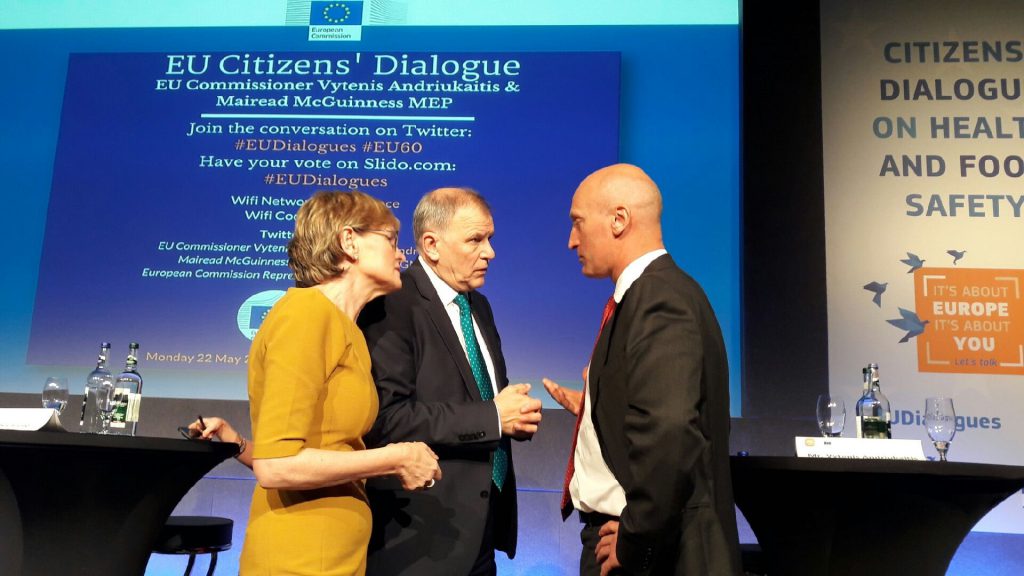 Woods commented how the real story, regarding the sheer extent and political involvement, is “only beginning to emerge” in Brazil, since the ‘Weak Flesh scandal’ story broke in the media in March.

“It is incredible that the EU Commission was only made aware of the issue through media reports.

“Attempts by the Brazilian authorities to try to confine the scandal to a limited number of establishments are not credible, when the reports indicate that the government inspection and control authorities were operating fraudulently and taking bribes from processors to buy certificates,” Woods said.

The IFA Livestock Chairman believes the “real story” and details behind the scandal have not yet fully emerged.

Woods has called on the EU Food and Veterinary Office’s reports on standards in Brazil to be published immediately.

‘A systematic breakdown of standards and controls’

The latest scandal and ongoing difficulties in Brazil point to a systematic breakdown of standards and controls, he said.

The EU Commission is fully aware of the failure of the Brazilian authorities to meet EU standards.

Woods highlighted the need for a strong policy on standards in the context of Brexit, in light of the Brazilian meat scandal.

“The IFA Brexit policy document has set out, very clearly, the need for equivalent standards on food safety, animal health, welfare and the environment, and the need for the application of the Common External Tariff for imports to both the EU and the UK,” he said.

'Commission's response to Brazilian scandal is not enough'