Farmers across Britain have lost confidence in the outlook for the industry over the next three years, according to the National Farmers’ Union (NFU).

The latest survey from the organisation, which champions farmers and growers in England and Wales, found an 18-point drop in confidence since the UK voted to exit the European Union (EU).

According to the study, farmers were now almost twice as likely to reduce investment (20%) as a result of the referendum than increase investment (11%), in the next 12 months.

NFU President Meurig Raymond (pictured) said investment intentions were a good indicator of profitability and production, and how progressive farmers could be.

He said: “Farmer confidence is absolutely critical to the future of a profitable and productive food and farming sector. In such a period of uncertainty politically, we need politicians to fully understand the impact this lack of clarity is having economically.”

Although the short-term outlook rose from a low of -18 points to +17 points amid expectations that a weak sterling would help boost the industry, Raymond warned that farming businesses were long-term and “cannot rely on currency fluctuations”. 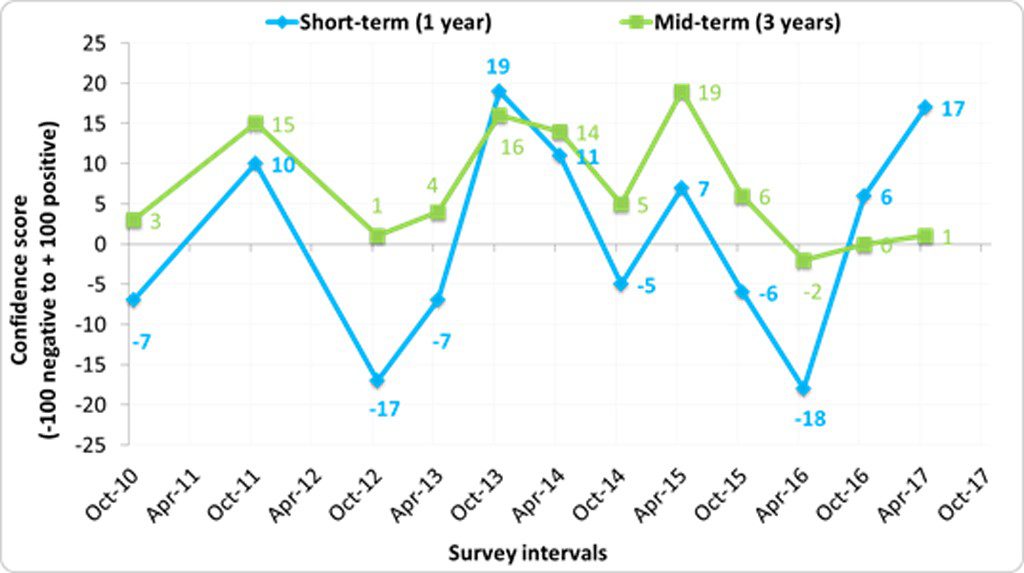 He said: “The government will need to take firm action to maximise on the future potential of British food and farming.

We need a competent and reliable workforce, a fit-for-purpose domestic agricultural policy and the right trade deals. And to address this debilitating uncertainty they need to give the industry as many assurances as possible.

The Brexit referendum showed a stark rural/urban divide, with West Yorkshire cattle and sheep farmer Robert Paisely saying that a local Brexit debate held before last June’s referendum suggested a large portion of English farmers were in favour of leaving.

Paisely, who judged the Beef Shorthorn classes at this year’s Ballymena Show, warned the loss of EU subsidies would mean market prices would have to increase by about 25% to keep businesses “ticking over”.