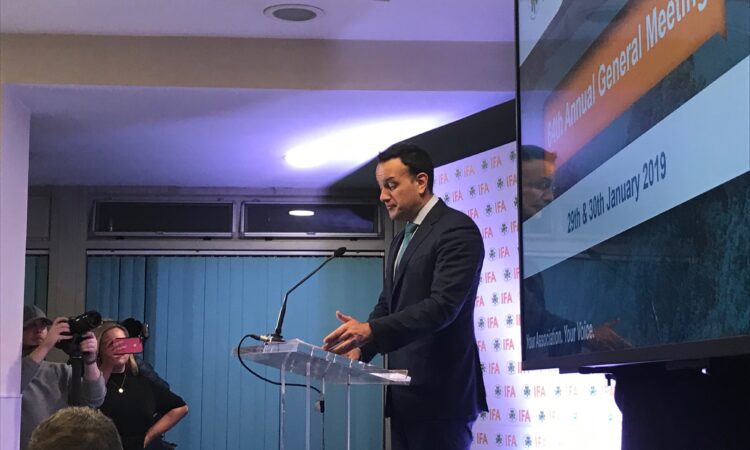 The Irish Government has alerted the European Commission of its intention to seek emergency aid for the beef, dairy and fishing sectors in the event of a no-deal Brexit, the Taoiseach Leo Varadkar has confirmed.

Speaking at the dinner of the Irish Farmers’ Association’s (IFA’s) AGM this evening (Tuesday, January 29), the Taoiseach announced the move to the gathered attendees.

“Given the uncertainty we face over the next couple of weeks, we have already alerted the European Commission to the fact that we will seek emergency aid for the farming sector in the event of a no-deal Brexit.

“The purpose of this aid – if we need it – would be to enable us to cope with the impact on Irish trade, particularly for the exposed beef, dairy and fishing sectors.

“The common market regulation or CMO regulation also provides for exceptional aid mechanisms to be introduced in order to manage significant market disturbances.

It’s been used before, for example, to support the Baltic states when the Russian market was closed to them and it can be used for us too.

The Taoiseach outlined, however, that more would be needed in the event of the UK crashing out of the single market with no deal.

“Among the many options discussed at cabinet this morning were intervention, aid for storage, restructuring grants and other additional state aids.

“You’ll also know that Minister Creed has been very engaged with Commissioner Hogan on these issues and I know he’s been very active over the past two years, as I have, [in alerting] desensitised member states and the commission to the unique vulnerability of our sector to a disorderly Brexit.

“And I can assure you that we will seek every possible assurance – but the overriding priority, of course, is to avoid ever getting into that position.

Brexit is, I think, one of the greatest political challenges of our time – and now is the time to hold our nerve.

The Taoiseach noted that, while every hope is to avoid a no-deal outcome, work has been carried out to help reduce the severe impacts of such a scenario:

“While working to achieve the best possible solution, we are also preparing ourselves for the worst.

“For example, in the most recent budget, we introduced a package of almost €80 million for farmers, the marine sector and food SMEs.

And this came on top of a range of initiatives in previous budgets: low-cost loans for farmers and food businesses; significantly increased funding for Bord Bia – and there’s much more of that to come.

“Through our Global Ireland 2025 plan we’re working to increase our global footprint and to diversify market opportunities.

“To give you some small example we’ve embassies and consulates, often with Bord Bia and agricultural attaches, opening in places like Frankfurt, Mumbai and Los Angeles this year,” Varadkar said. 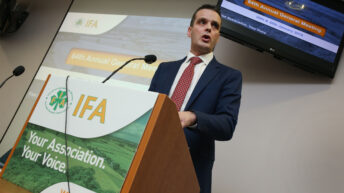