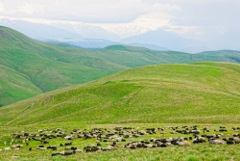 The ICSA (Irish Cattle and Sheep Farmers’ Association)  has re-affirmed that the new Rural Development Programme (RDP) needs funding of up to €700m per annum in order to make a real impact in terms of meeting the requirements of Irish agriculture and the ongoing needs of Irish farm families.

Furthermore, as part of any new RDP, the ICSA is advocating a series of measures, which will help secure the sustainability of the various farming sectors.

“A more streamlined and integrated approach must be taken to rural development funding applications and monitoring to reduce the duplication of labour and lessen the administrative burden on both the Department of Agriculture and applicants,” an ICSA spokesperson told AgriLand.

The ICSA is committed to securing top-up payments up to a maximum €1,000 per scheme for specific rural development initiatives (agri-environment, suckler and disadvantaged area) to farm businesses classed as ‘low income holdings’. The organisation also wants a new suckler scheme to be set up within the framework of the RDP, requiring farmers to supply breeding information to Irish Cattle Breeding Federation, together with selected additional information.

“We are asking for a greater focus to be put on farmers on marginal land, with high rainfall, non-arable land or at higher elevation in relation to disadvantaged area funding,” the ICSA representative continued.

“Moreover, the department must fund a new expanded farm investment scheme targeting practical innovation aimed at making farm systems more competitive. We are also calling for the sheep grassland scheme to be made part of the next rural development programme.

“We are also calling on the minister to ensure that young farmers receive 25 per cent extra on agri-environment, disadvantaged area or suckler scheme payments, provided they also fulfil the low-income holding criteria limits. There should also be continuing support for developing the organic sector in Ireland through a separate organic support scheme.”

ICSA is also asking the Department of Agriculture to develop and implement a new agri-environment scheme that is more comprehensive and ambitious than AEOS.

“Any new scheme should be developed in consultation with farmers,” the ICSA representative further explained. “In the context of the new RDP, the department should instate a separate agri-environment scheme for uplands. It is also important that farm forestry planting continues to be supported with planting aid and farm forestry premia.”