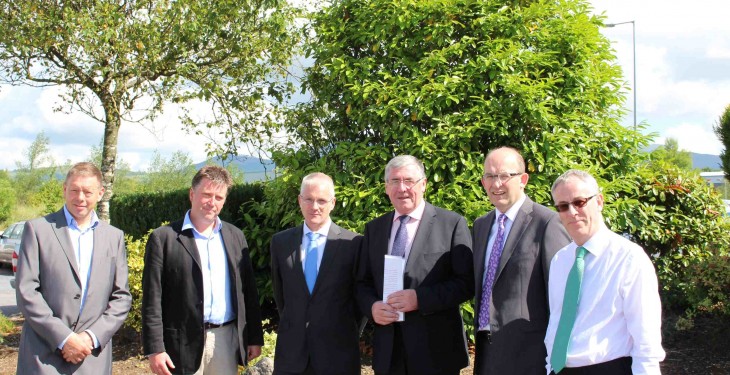 “Some neglect what milk actually is. If you want to be the best in class you should know everything about milk.” These were the words of Frans Keurentjes, a board member for the Dutch dairy giant Friesland Campina, who was speaking at a diary conference in Mitchelstown earlier today.

Organised by Dairy Ireland, which represents dairy farmer discussion groups across Ireland, the conference attracted leading Irish and international figures from the dairy and financial sectors.

Keurentjes outlined the milk pricing strategy Friesland Campina uses, the structure of the company, its exporting plans and its new research and development hub in Wageningen, which is set to open this year.

Keurentjes is a dairy farmer, he told the packed crowd in the Firgrove Hotel. “In my home farm I have 120 hectares, with dairy cows and my son is doing the farming at the moment I am mostly involved in Friesland Campina. At the same time I have a farmer family in Germany with daughter-in-law, they farm 600 hectares with 300 dairy cows.”

In terms of running an international dairy business he said the cornerstone is that everything starts with ‘Why?’. “We focus on the ‘Why?’ question in Friesland Campina. Everything we do starts with ‘Why’.”

He said the daily needs of consumers and the different type of consumers is a main focus for the company to determine its markets. He also added that its focus on consumer brands was key. “We are trying to get away from common goods to develop the business, to add value, to develop brands, consumer products and ingredients.”

Keurentjes outlined the company’s main markets, which includes mainly Europe, Asia and some in the US and Russia. In terms of figures he said latest reports show revenue of €10m, with 20,000 members of the co-op and a further 20,000 employees.

He said the company is 100pc owned by the co-op and it was established 140 years ago. The merger in 2009 of dairy companies Royal Friesland Foods and Campina, which created Friesland Campina, was key and planned in preparation for the Europe market post-Quota.

“Northern and Southern Dutch dairy firms physical and emotional stepped over lines. At that time both boards of both co-ops became aware what the situation around the abolition of the quotas would be. It is about open markets, really change the markets and changing the world.”

Keurentjes said if big diary companies could “no longer rely on politics and support because of change in Common Agricultural Policy” then companies should focus completely on what the consumer wants, which he said, is what Friesland Campina does. “Farmers should take responsibility and initiative in their own hands, and don’t reply of governments or association or others. Don’t focus on others, focus on the farm, what consumers want and you can be very successful,” he advised.

In terms of structure, he said Friesland Campina operates like a PLC and a co-op at the same time. “The co-op owns all shares, farmers can never share any shares and the business is governed and run as a plc,” he said matter-of-factly.

Looking to the future, Keurentjes said its research has indicated a strong decrease in dairy farms in Europe but on the other hand it predicts a big rise in milk production. “Every year we do a a survey among farmers. We use those numbers along with others investigations to analyse what to expect in terms of the amount of milk that will be produced.”

For 2015 to 2016 with the amount of barns, stables and facilities Friesland Campina has on its books, it is hoping to  produce one billion extra supplies of milk, he claimed. “This is what we expect in the nearby future regarding extra milk,” he firmly stated.

In terms of exporting its wealth he said Friesland Campina is very much focused on the global and European markets, he said. “To be successful in the markets, there is going to be more milk, so we need to analyse and be aware of the market to fill the demand of consumers. We analyse and investigate consumers, where is most of the dairy demand in the coming years and relate the to where we are already activating,”

The company has observed a steady growth and increased demand for dairy products across Asia. “Our strategy is to grow with the market in these countries. We recently bought a milk operation in the Philippines. Although we were not active in the Philippines, this was a company we could steer and base a headquarter for our Singapore market.”

He explained further: “Our milk pricing based on guaranteed milk price. We have some form of price on monthly basis. We announce it on the first Monday of every month, this is what our guaranteed milk price is. At the end of the year we divide the co-op profits, that is what we call the divide, the performance premium.”

He noted farm milk price went down last year but the quality of profit improved. “The focus in the short-term is that this number should go up three cents per litre.”

“We set a guaranteed milk price that is equal to the average in our Western European operation that reflects 45/46 billion litres of milk. It is based on what different companies pay their farmers and includes the profits from the year before. The milk price is independent. It is estimated monthly. It is transparent and open to analysis.”

He explained further: “On monthly basis we as famers sell to management and that’s the way they have to work it.  That leads at the end of the day, end of year, to a company profit. The final result is for 50pc investment and 50pc to farmers from their performance and fixed member bonds.”

In terms of post-Quota he said Friesland Campina puts its employees, consumers and owners to put them on “top of the mountain” and that research is key.

“We have consumers developing, getting older, wealthier and healthier. You have consumers in all types of categories and we have the  answers to what they will be to the markets,” he claimed.

Friesland Campina recently announced an investment of more than €700m in processing facilities over the next two years; equivalent to almost a five cent per litre it claimed and key driver for this is research, Keurentjes said.

“We are opening a research centre later this year to employ 400 people to develop further all the qualities of milk. So far we only know 200 identified proteins in milk and there are over 400 a Dutch professor recently told me, so there is a lot to investigate, a lot to find out in terms of what qualities milk has in it and difference to dairy producers.”

Reports from other speakers including Diary Ireland’s David Murphy, Dairygold’s Jim Woulfe, Rabobank’s Barry Henry and finance expert John Crawley to follow this week and next.

Pictured is the panel of speakers/photo Denis Finnegan