An earthquake with a magnitude of 2.1 was observed yesterday evening, Monday, April 29, in Co. Donegal. The tremors occurred at 6:23pm.

The epicentre of the earthquake was pinpointed to be here in Tullyhassen, Co. Donegal. The location was approximately 15km south-east of Donegal town and 15km north-east of Ballyshannon.

The earthquake was detected automatically by the Irish National Seismic Network (INSN) which is operated by the Dublin Institute for Advanced Studies (DIAS) in co-operation with the Geological Survey Ireland (GSI).

The event was felt by many members of the public in the south of Co. Donegal.

It is understood that the minor earthquake caused no significant damage.

The INSN is appealing to members of the public who may have felt the tremors or noticed this event occurring to click here to fill out a short questionnaire.

An event of greater damage occurred in Co. Monaghan last September when a chasm opened up on the grounds of a local GAA club’s playing field.

At the time of the event, a post on Magheracloone Mitchells’ Facebook page warned locals not to enter the club’s grounds “under any circumstances“.

The club’s pitches, community centre and car park were closed due to the “serious incident”.

Damage was caused to the amenities when the chasm opened up across the field. Local reports suggest that the chasm may have opened up due to a mine collapsing. 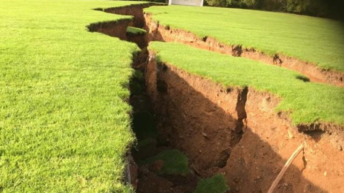