Emigrants contemplating returning to live in rural Ireland should bear in mind the potential challenges as well as the positives, according to Karen McHugh CEO of Safe Home Ireland.

Based in Mulranny, Westport, Co. Mayo – with outreach offices in Kerry and Galway – the organisation was established in 2000 to work with elderly Irish emigrants who wanted to return to live in their native areas.

It has since evolved to offer a range of other services including information and advice to all emigrants – as well as outreach and advocacy support to those who have returned home.

Since its foundation, Safe Home Ireland has supported almost 2,000 people to return to this country. It assists qualifying Irish emigrants to get back home, primarily to social housing schemes in their native areas.

“We don’t manage or build any properties of our own but we work in conjunction with housing associations,” Karen said. Last year 70 people were accommodated, with 64 new applications for housing assistance.

To apply for housing through Safe Home, people must be: Irish-born emigrants living abroad; aged 57 years or older; capable of independent living; residing in rented accommodation abroad; and unable to provide accommodation out of their own resources on their return to this country.

As part of its outreach work, home visits are organised by Safe Home with applicants throughout the UK.

“We also provide an outreach and advocacy service to people who have returned home, regardless of their age or circumstances, who need assistance with general resettlement and integration in Ireland,” Karen said.

Safe Home also acts as a link with home for those who decide to remain in their adopted countries.

“We do this primarily through our monthly newsletter which is disseminated globally as well as through social media platforms. We recognise that coming home is not for everyone but staying connected with Ireland is particularly important for most emigrants,” she said.

The most important message we would like to get across to anyone considering a return to Ireland is to do your homework. Plan your move well in advance and be prepared for the emotional challenges in returning home.

The crackdown on the undocumented in the US, as well as the uncertainty around Brexit have caused more people to contemplate returning to Ireland, she said.

“In the USA, the undocumented are keeping their heads down. The situation is a worry for them obviously but a lot of them are from rural Ireland, and wouldn’t be able to get work if they returned home.

“What we are finding is that people who return are coming back to Dublin or commuting for an hour to the other cities,” Karen said.

Other challenges in rural areas include: lack of public transport; poor-quality broadband; and a reduction in services, she said.

An Indecon economic report on addressing the challenges faced by returning Irish emigrants, submitted to the Department of Foreign Affairs and Trade in February, pinpointed the following barriers: housing; driving; employment; finance and banking; health and childcare; immigration and welfare; and education.

Those who return to farming often encounter difficulties with providing the required documentation to the Department of Agriculture, Food and the Marine, Karen said.

Safe Home acknowledges the difficulties and challenges faced by Irish abroad who wish to return home to take over family farms.

“We really hope that the various Government departments and other external bodies named in the recent Indecon report can work together to ensure that the current barriers are lifted and that Ireland can benefit from its citizens that it exported during difficult economic times,” she said. 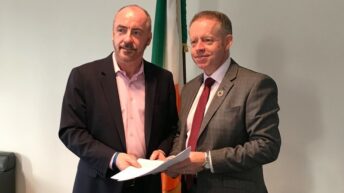