Is Hogan about to really clamp down on the supermarkets? 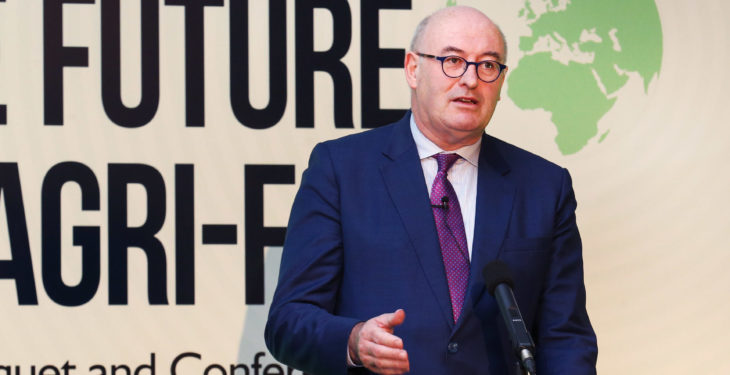 The European Commissioner for Agriculture and Rural Development Phil Hogan

Fine Gael Member of the European Parliament (MEP), Sean Kelly, seems confident that the EU’s Commissioner for Agriculture and Rural Development, Phil Hogan, is about to introduce far-reaching legislation that will force the supermarkets to come clean when it comes to their buying-in policies.

Let’s hope he’s right. This is a key policy area, which Hogan has committed to addressing time after time since taking office in November 2014.

It’s long overdue that the supermarkets should be brought to book when it comes to the way in which they deal with their suppliers.

All of this has a direct impact on the returns received by farmers.

The last decade has seen a major reduction in the produce prices received by farmers. During the same period, however, all input costs have increased while the support levels received by primary producers have been consistently eroded.

As we look to the future, Phil Hogan and other EU policy makers talk of current budgets being at best maintained as the most upbeat financial outcome that farmers can look forward to.

But, in truth, if this turns out to be the case then it represents a further weakening in the support levels made available to production agriculture.

The only way of countering this situation is for farmers to secure better prices for the produce they bring to market.

Any attempt made by Hogan to shed more light on how the farming and food chain operates must be decisive and legislatively binding, where the supermarkets are concerned.

There is total transparency when it comes to working out the margins generated by farmers in Ireland and their counterparts throughout the rest of Europe.

The same cannot be said for the supermarkets.

This state-of-affairs must change. But this is only the first step in a process that must deliver for primary producers. I would argue that farmers must secure a certain proportion of the final retail prices paid for the various food items sold in shops.

This is an entirely different scenario from that of guaranteeing the farmer a specific price.

Commercial markets will always fluctuate. However, there is nothing to stop the EU authorities from acting to ensure that primary producers receive an agreed proportion of the revenues generated by supermarkets from the food they sell.

Without farmers, the would be no farming and food chain in Europe. Production agriculture represents the foundation to this entire industry.

So it’s time farmers got due recognition for the key role they play in producing food of the highest quality every day of the year. The Common Agricultural Policy (CAP) just doesn’t cut it any more.