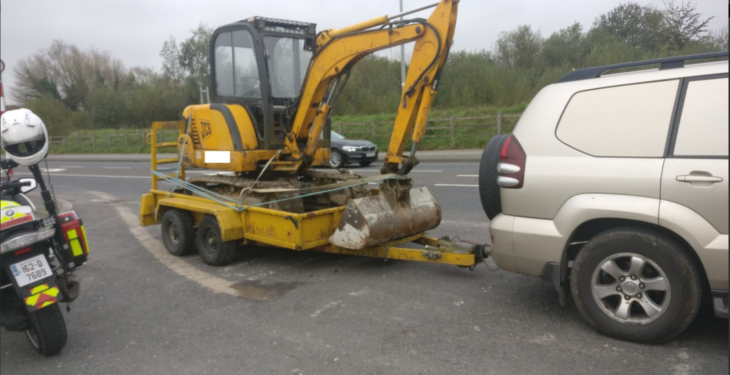 Gardai recently pulled over and reprimanded a driver of a 4X4 who was towing a trailer and mini excavator without the correct driving licence.

Having taken place in Limerick last Friday, October 20, a tweet about the incident was posted on the official Twitter page for An Garda Siochana.

The tweet states: “Limerick traffic encountered person driving without proper license category – driver only has a “B” license; summons to follow.”

From this, it is safe to gather that the driver in question is awaiting a court date following the meeting. However, it does send a reminder to drivers to make sure they have the right licence when towing a trailer.

#slowdown Limerick traffic encountered person driving without proper license category…driver only has a “B” license….summons to follow. pic.twitter.com/AQI0bXfvjl

Relating to a similar incident earlier this year, a spokesperson for the Road Safety Authority (RSA) said: “If you have a category B driving licence to drive a vehicle – a car or jeep – you can tow a small trailer. If you want to tow a larger trailer, you must have category BE on your licence.

“On a category B licence, you can tow a trailer with a MAM – maximum authorised mass – of not greater than 750kg, and/or if the MAM of the trailer exceeds 750kg, the total combined MAM of the vehicle and trailer must not exceed 3,500kg.

As a general rule, your category B licence will not allow you to tow a horse box or a livestock trailer for bringing animals to the local mart.

On a category BE licence, the RSA said, you can tow a trailer where the MAM of the towing vehicle and trailer combination is not greater than 7,000kg.

In a separate incident earlier in the month, members of An Garda Siochana in Letterkenny, Co. Donegal seized a quad being driven on a public road.

A tweet posted on the Garda Siochana Twitter page stated that the quad was seized on a public road. It is also inferred that the driver of the quad had no licence and that the vehicle wasn’t insured.