Diseases of the digestive tract such as inflammation of the bowel and scour have been identified as the main cause of death in cattle in both beef and dairy animals which presented to Regional Veterinary Labs.

According to the Department of Agriculture’s Quarterly Surveillance report, there were 767 cattle post mortems carried out from April-June 2015.

The majority of cattle deaths were as a result of diseases effecting the digestive tract (40%).

Diseases effecting the airways and the respiratory system accounted for 17% of all cattle deaths, while systemic disease was identified as a cause for 11% of these deaths.

Approximately 8% of post mortems could not identify a causative factor, while cardiovascular and metabolic diseases accounted for approximately 5% of tested deaths, it says.

Clostridial diseases were identified as the reason for death in 2% of cases with 80% of these deaths having occurred as a result of black leg and a further 20% due to pulpy kidney disease.

Inflammation of the intestine and scour (enteritis) has been identified as the number one causative factor for cattle deaths across all ages during this period, it says.

These post mortems indicate that 120 out of the 767 deaths were as a result of gut inflammation.

This is followed by pneumonia (approximately 105 deaths), blood poisoning and bacterial blood infections accounted for 39 deaths and the combination of enteritis and blood poisoning was identified for a further 38 deaths across all age groups, says the Department.

Poisoning with toxic substances was diagnosed as the cause of death in 2.6% of deaths (20 animals). 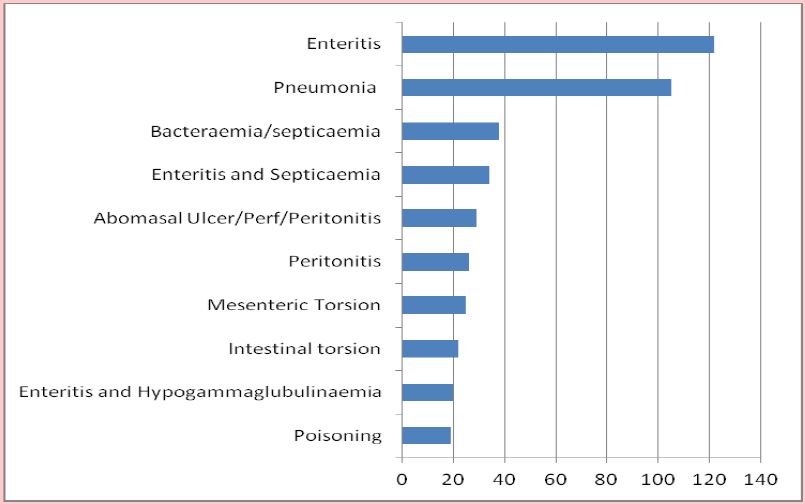 The Zinc Sulphate Turbidity test (ZST) was also performed on 424 clinically ill and deceased animals. This test indicates the success of immunoglobulin transfer from mother to calf through colostrum, it says.

The results indicated that 48% of calves tested had inadequate ZST levels, indicating that these calves received inadequate levels of colostrum.

Calves less than one month

According to the Department, post mortems were carried out on 337 calves during this period and approximately half of these deaths were as a result of digestive system diseases.

Systemic disease was identified as the cause of death in 40 of these calves, while respiratory disease killed 30.

It also said neonatal calves were the most frequently submitted carcass types during this period.

Calves one to three months of age

Of the 247 post mortems carried out in this age bracket, digestive system diseases were identified as the cause of death in 40% of animals, 27% died as a result of respiratory disease, while a further 7.5% had systemic diseases.

Like the younger cattle, gastrointestinal disease was identified as a major contributor to the death of 19 out of the 88 weanlings tested, it says.

This was followed by respiratory (19%) and neurologicial disease (13%).

There was a total of 96 adult cattle post mortems carried out during this period. No diagnosis was identified in 14% of cases, while cardiovascular, systemic and digestive tract disease accounted for 14% each, says the Department.