Department says its investigation unit has no ‘special powers’

The Department of Agriculture’s Special Investigation Unit (SIU) has no ‘special powers’, according to its General Secretary Aidan O’Driscoll.

Appearing before the Oireacthtas Public Accounts Committee (PAC) this week, he said allegations made to the committee that the the SIU were out of control were without foundation.

He also said there is no unit of the Department of Agriculture that is out of control or that operates on its own.

“There is a chain of command in every Government Department. I am the General Secretary, I have my Assistant Secretaries and Chief Veterinary Officers reporting to me.

“These people work within a chain of command,” he said. 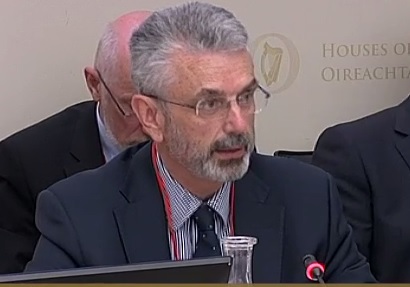 General Secretary of the Department of Agriculture Aidan O’Driscoll

O’Driscoll said there has been significantly misleading information given to the committee on the extent of the powers of the SIU and how it operates.

However, he stressed that the SIU does not make that decision on its own.

“What happens is a file goes to the Chief State Solicitor’s Office (CSSO) or the Director of Public Prosecutions (DPP). In the case of the DPP it makes the decision to prosecute.

“If it goes through the CSSO a council is appointed by the Attorney General. That council would look at the case and decide whether or not to prosecute.”

O’Driscoll dismissed suggestions that the SIU have special powers far beyond what everybody else has as ‘completely untrue’.

The same powers no more no less.

However, he did say that those powers are ‘significant’ citing the fact that the Department is protecting food safety and animal health.

According to O’Driscoll, the powers of those in the SIU are similar to the Gardai, but not as extensive.

“They cannot arrest people, they can’t search a house without getting a warrant except in a very rare circumstance,” he said.

This week’s hearing in the PAC took place to air concerns around the perceived ‘heavy handed’ approach to compliance by the SIU of the Department of Agriculture.

The PAC pressed Department of Agriculture officials on the procedures of the SIU, which have been the subject of criticism by farmers, vets and judges in recent years.

While the SIU is now disbanded, the Committee will be explored whether the new structures to govern the investigative capacity of the Department have appropriate oversight to ensure the mistakes of the past will not be repeated.