Joe Farrell and his family are participants in the Teagasc Green Acres Calf-to-Beef programme and operate a mixed enterprise, consisting of beef and tillage, in Co. Kildare.

Earlier today, the Castledermot-based farmer opened the gates of his farm to over 100 visitors to show them the ins and outs of his system.

Prior to entering the programme, Joe was purchasing 75 Angus/Hereford heifers and 15 Friesian bull calves, which were brought to beef at 22-24 months and 16 months respectively.

He also operated a tillage enterprise consisting of approximately 33ha.

But, with falling grain prices, the focus on-farm has switched and Joe has now reduced the tillage area and increased cattle numbers. 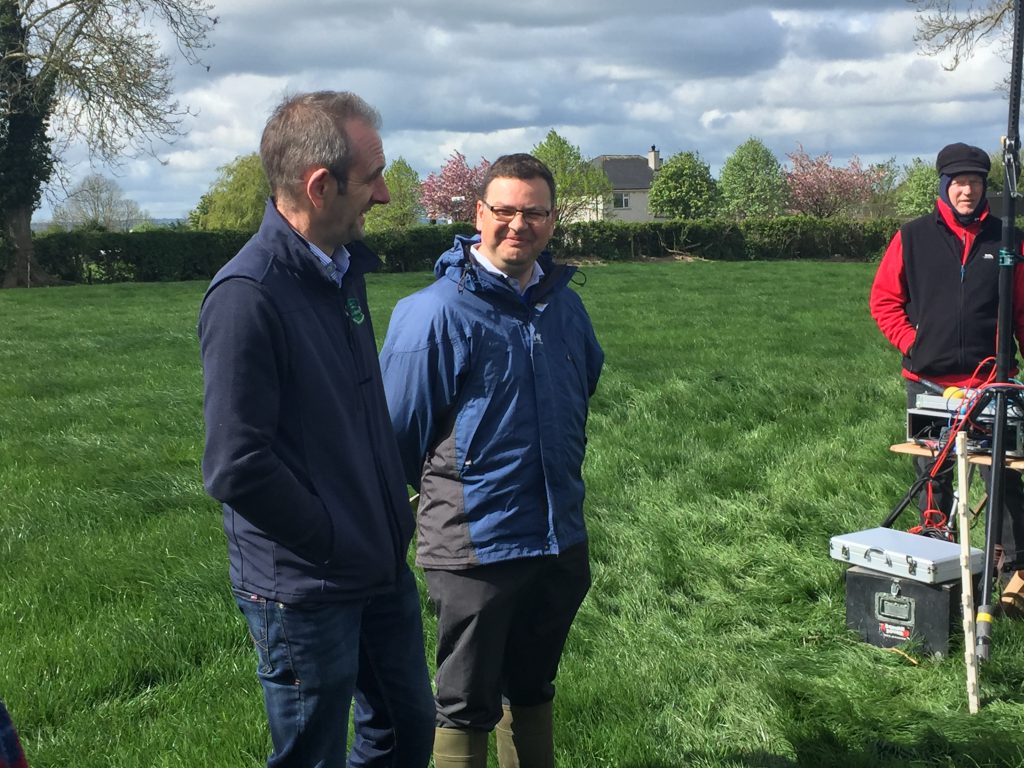 One of the major improvements Joe has witnessed since joining the programme has been the increased use of grass, which has been achieved through the installation of a paddock system.

Back in 2014, Joe’s farm consisted of only seven grazing divisions. This has since increased to 32 individual paddocks. This investment cost approximately €4/ac/year (over 10 years).

I wanted to push the farm, grow more grass and produce more beef and, since joining the programme, I have seen a big improvement in grassland management.

“The cattle are now moved to fresh grass every three days.”

Along with reducing the tillage area, Joe will also move away from bull-beef production.

“I wanted to keep the system as simple as possible. Keeping just steers and heifers gives me the option to graze them as one group if needed.” 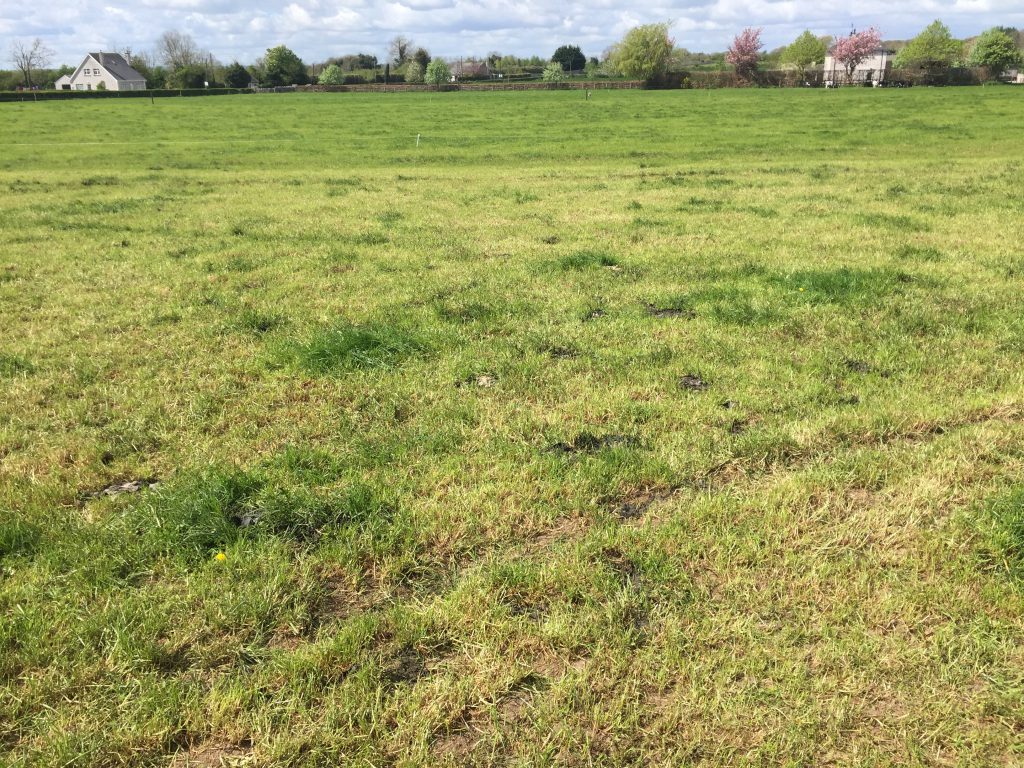 Last year, Joe’s farm produced 13t DM/ha and, in the coming years, he hopes to increase the farm stocking rate to 3.5LU/ha.

To do this he needs to grow more grass, something which Joe believes is possible through improved grassland management, good soil fertility and the use of recently-reseeded or new swards.

Local Teagasc Advisor, Christy Watson discussed the benefits of a paddock grazing system adding: “No farmer who has put in paddocks has regretted doing so”.

The Farrell family farm is currently stocked at approximately 3LU/ha (grazing area only), made up of four groups. This will increase to 3.5LU/ha in 2019.

An additional 50 calves will be brought into the system in the coming weeks, which puts the total number of spring calves at 150 head.

Given the high number of calves, Joe has placed a major emphasis on herd health planning, calf nutrition and housing. 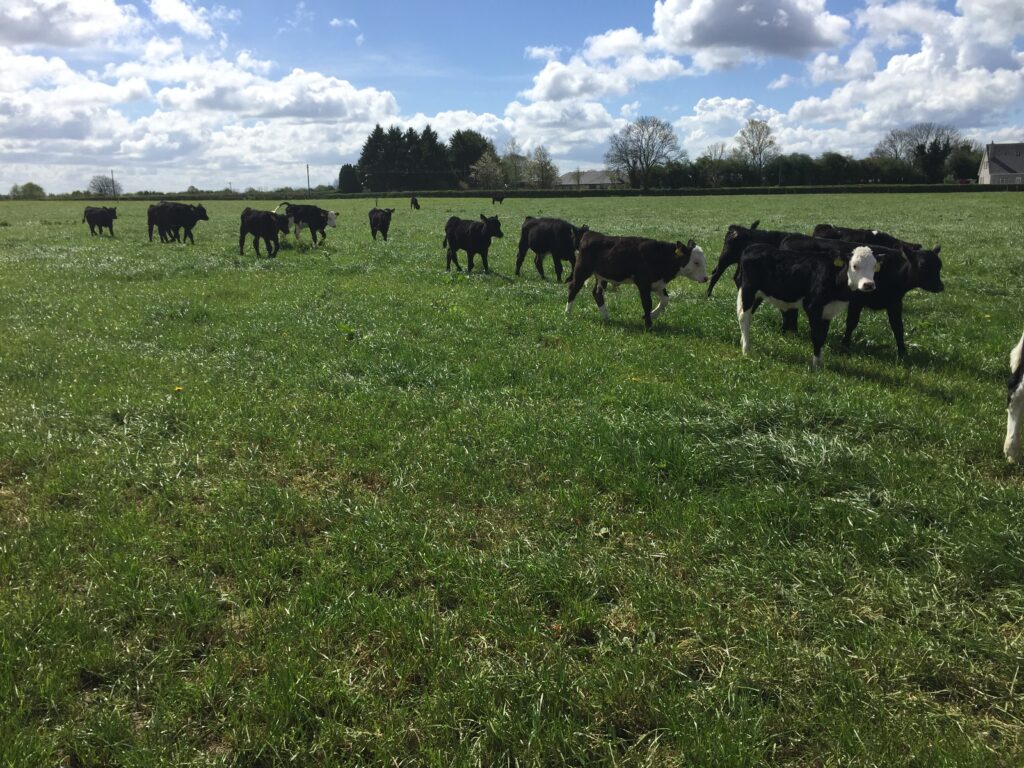 Some of the spring-born calves on Joe Farrell’s farm

Before the next batch of calves arrives, the housing facilities will be completely cleaned out and disinfected. This will limit the disease pressure on the new additions to his herd.

A vaccination programme has also become an integral part of Joe’s system and all calves are vaccinated for Pneumonia (Bovipast RSP), IBR (Bovilis IBR Live) and Clostridial diseases (Tribovax 10).

Joe told those in attendance about the benefits he has seen since introducing a vaccination programme.

Since I started vaccinating I have noticed a considerable drop in the amount of antibiotics used on-farm.

“We are now using 70-75% fewer antibiotics and this gives me more time to focus on calf rearing and other tasks on the farm,” he said.

As mentioned above, Joe plans on moving away from the 16-month Friesian bull beef system.

From now on, two production systems will be employed on-farm. These are a 20-month Angus heifer system and a 24-month Friesian/Hereford steer system.

By 2019, Joe plans on slaughtering 60 Angus heifers, 40 Angus steers and 70 Friesian steers under the above mentioned systems.

A breakdown of the costs and returns associated with the system can be viewed below: