Dairy throwback: Converting to dairy on a budget in Co. Wicklow 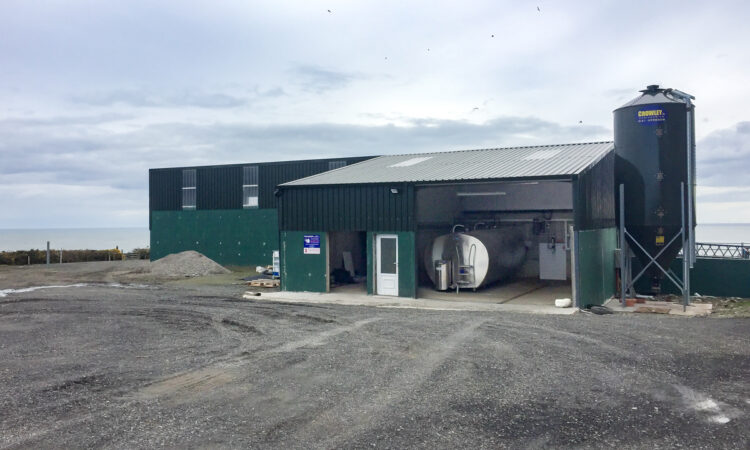 Today we will be taking a look back at a recent dairy conversion, which we visited on a blustery day back in March.

Situated right on the coast of the Irish sea, Ben Mooney and his son Robin are dairy farming in an area many farmers would only dream of.

Robin and Ben are in their very first year milking on their newly converted dairy farm. Previously, they were a beef and sheep farm; at one stage lambing up to 800 ewes on the farm.

The farm consists of 180ac, with approximately 50ac designated to silage ground, but the whole farm is within walking distance from the parlour.

The decision to convert to dairy was made after Robin came home – from studying Agricultural Science in Waterford Institute of Technology (WIT) – to farm with his father.

“There was barely enough of a wage here for one person, never mind two. So, we needed to make another wage on the farm; and we knew that definitely wasn’t going to happen continuing the way we were,” explained Ben. 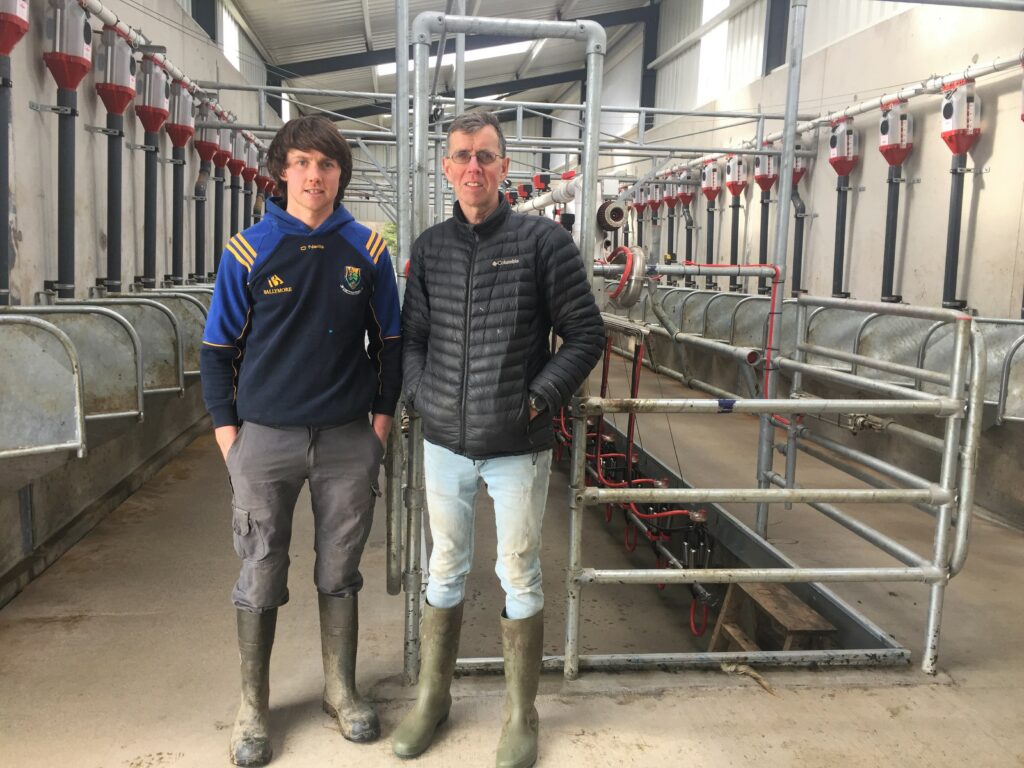 The decision was made to form a partnership between the two to avail of some of the Targeted Agricultural Modernisation Scheme (TAMS) grants.

On the day of the visit, calving was beginning to wind down with only 14 cows left to calve; calving went well with 90% calved in less than six weeks.

In March of last year, Robin and Ben began their search for suitable stock for the farm. A total of 140 heifers were purchased.

“We thought about buying cows, but we were advised not to; and it is much harder to find a big group of cows rather than a big group of heifers,” said Ben.

The criteria for the heifers was pretty straightforward.

“We were looking for a British-Friesian type heifer; paying some attention to EBI, but not basing our selection solely on this. 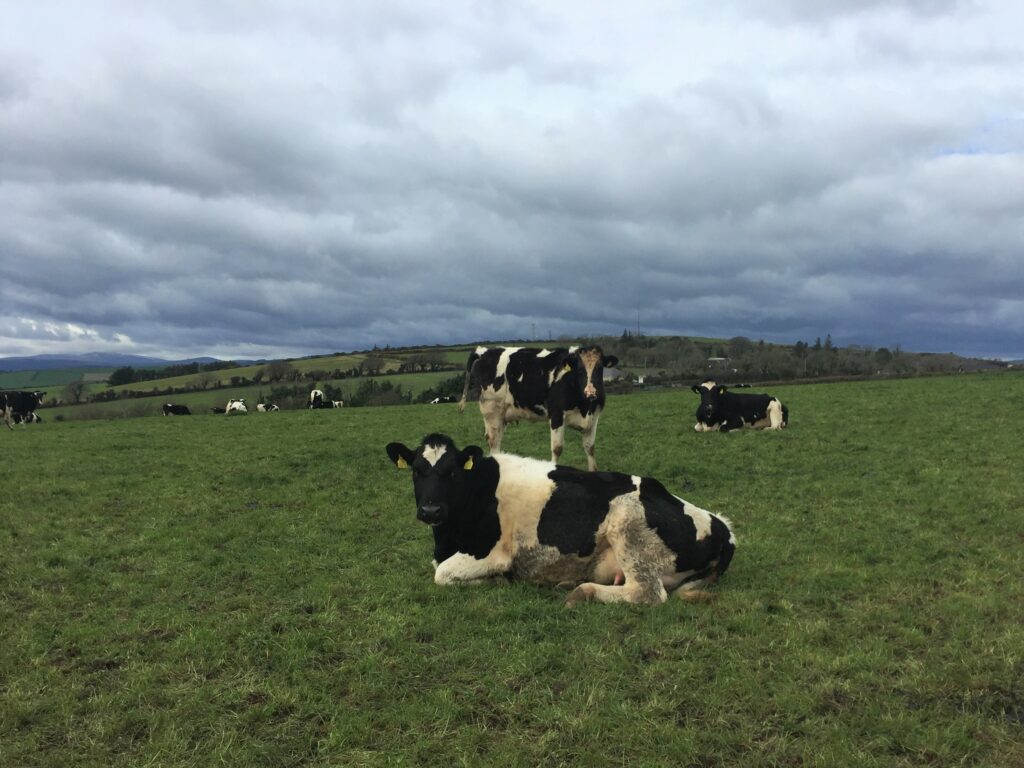 “We wanted to buy from as little dairy herds as possible, but in the end we bought from five different herds. Although we tried to buy big groups as much as possible from each herd.

“Just by going in and talking to a farmer we could get a feel on whether they were genuine or not,” explained Robin.

In an effort to keep costs down, high-EBI, British-Friesian stock bulls were also bought and were ran with the heifers. They had a 2% empty rate after 12-weeks breeding, which they were very happy with.

There was minimum infrastructure put in place on the farm for the conversion.

The only new building on the farm was a new 20-unit Pearson milking parlor. The parlour includes: automatic cluster removers (ACRs); an automatic wash system; air gates front and back which can be controlled from any of the control panels; and IDS batch feeders.

“We were on budget and the dump line was an extra €5,000, so we opted not to put it in to keep costs down,” explained Ben. 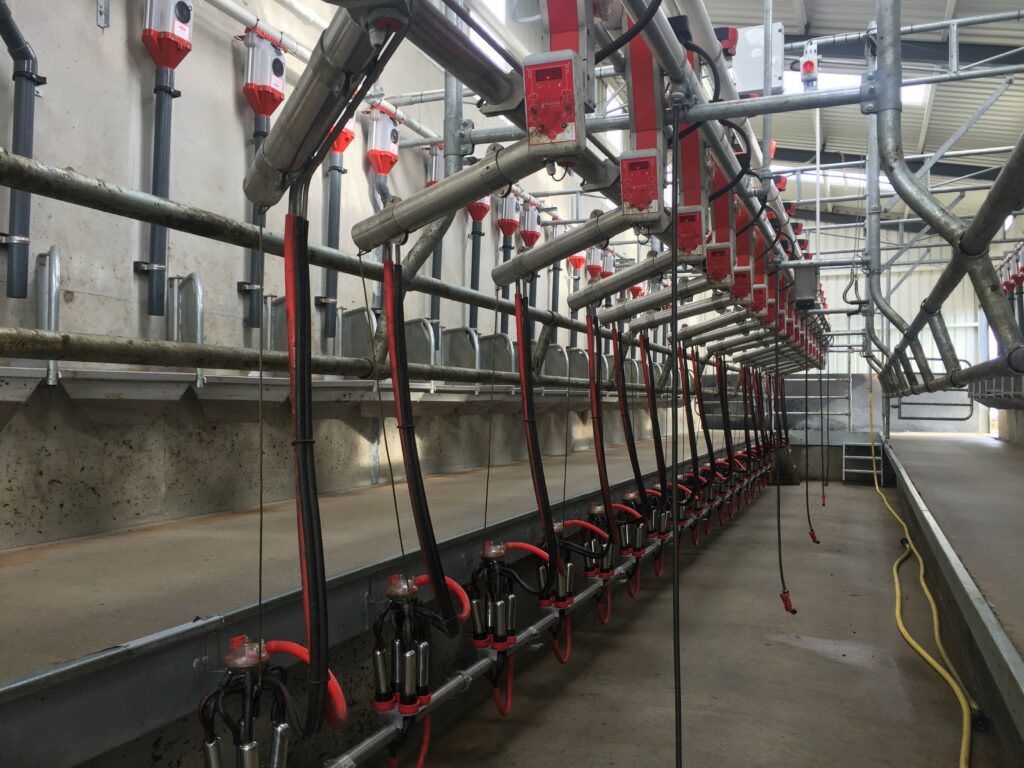 “We decided to go with Packo because there is a local man who services them; so we knew we could call on him if we had any issues,” which is very convenient explained Ben.

Commenting on the winter management, Robin said: “For the winter, the heifers had access to a sacrificed paddock along with a yard for feeding off. As they approached calving, we moved them into a straw-bedded shed. 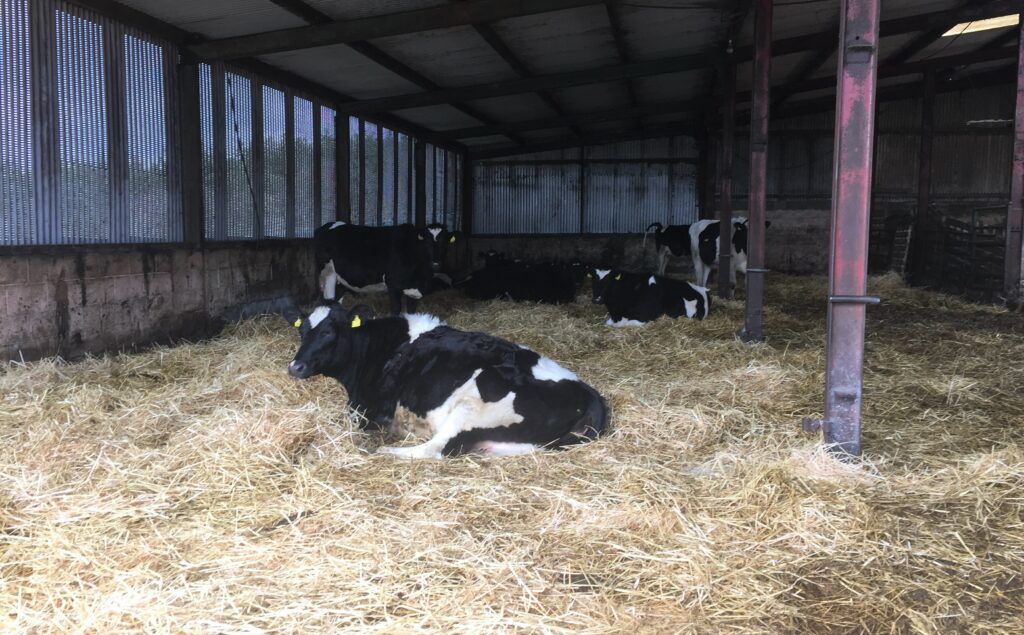 “This system worked very well due to the excellent weather conditions this winter and we made huge savings on straw bedding.

“We also grew 4ac of fodder beet which we initially planned on grazing over the winter; however, the weather was so dry and we had so much silage that we decided to pull it and sell it instead.

“We are considering converting an old shed to cubicles, but this year went so well we haven’t decided what to do with it yet. I know every year won’t be like this one though,” explained Robin.

Keeping costs to a minimum

Robin and Ben took a DIY approach for keeping costs to a minimum on the farm. Some roadways were already in place, but a lot of these needed resurfacing.

Nothing was purchased for the roadways; all the surface was quarried on the farm.

“Filling for the roadways was dug out on the farm, levelled and then rolled with a vibrating roller to bring the dust to the surface. 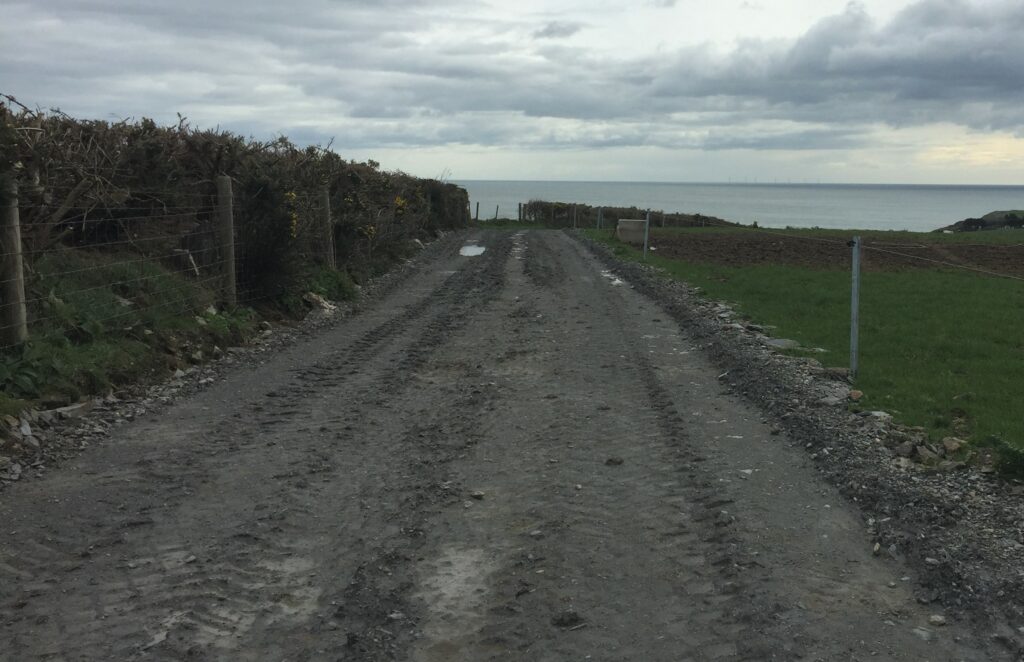 “It’s amazing how the dust just comes to the top, so it makes a really nice surface for the cows to walk on,” said Robin.

All the steelwork around the parlour including a new crush was carried out by the Mooneys. In addition, they did all the fencing on the farm through the use of Clipex fencing. These are lightweight steel posts with a galvanized coating.

Commenting on this, Robin said: “As an alternative to using timber posts we opted for Clipex fencing. 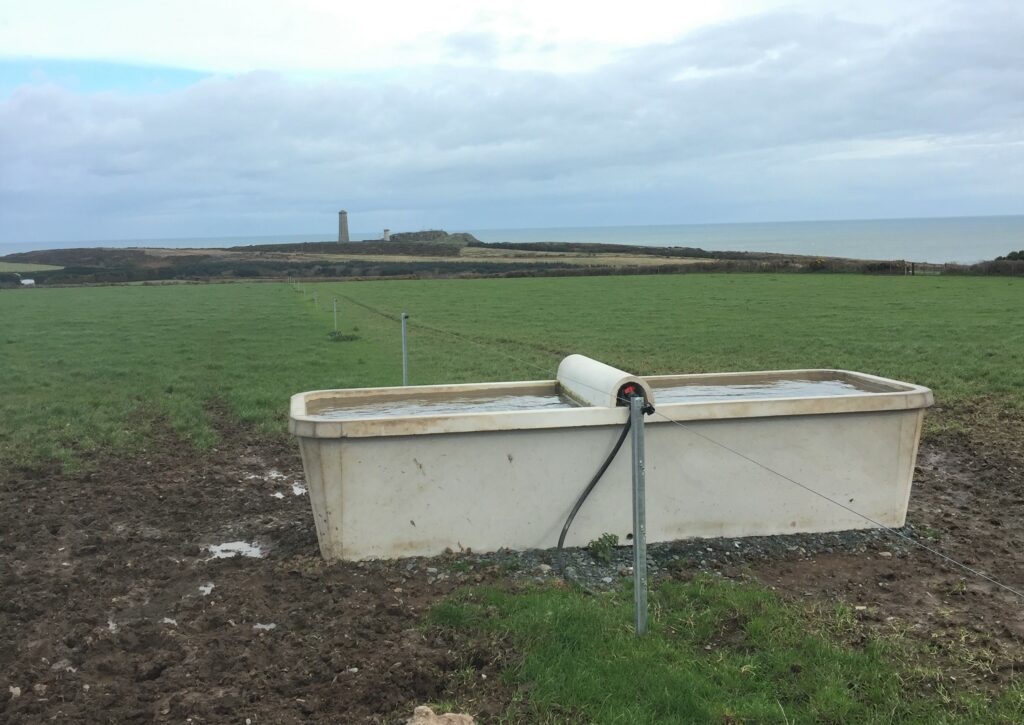 “I first came across Clipex fencing when I was working on a dairy farm in New Zealand and I thought it was a great job.

“It is really easy to install which meant we could drive all the posts ourselves saving on machinery costs. It is durable too, because it doesn’t rot like timber posts, so we feel it will last longer.”

The calves were housed in small pens bedded with straw before being moved to group pens in an old converted sheep shed. 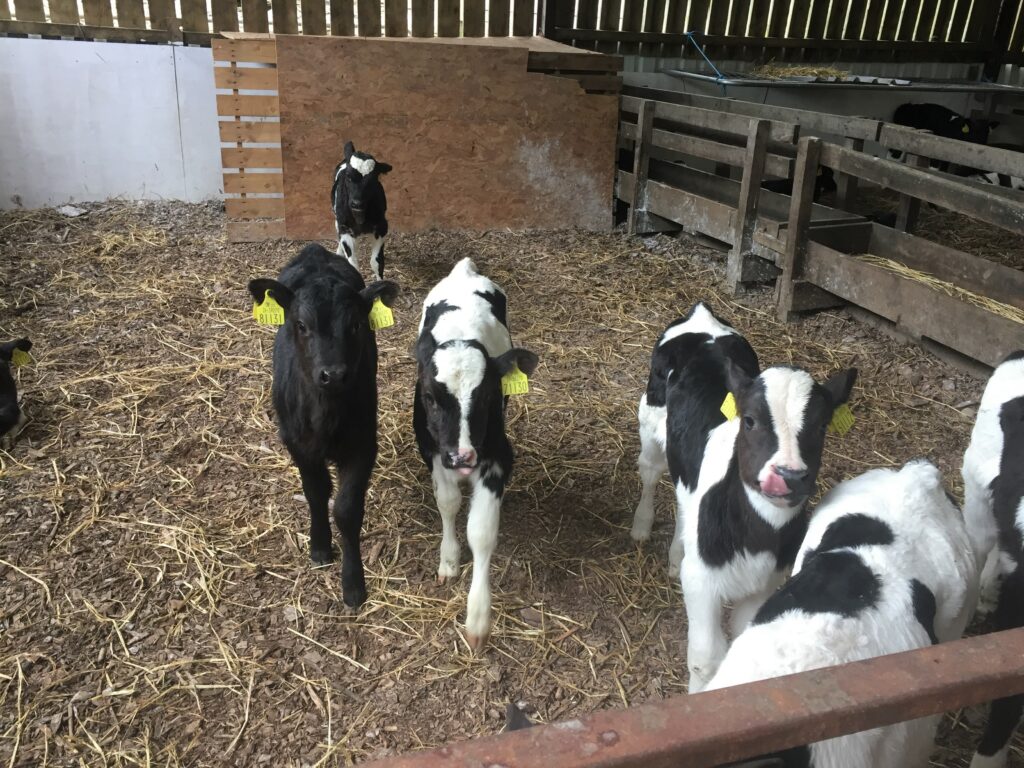 The whole shed was bedded with woodchip shavings and no straw was used. The old walkways that were used when the shed housed sheep were used as dividers between the pens of calves.

“It cost us €400 to bed this whole shed, €100 per silage trailer load of wood chip; it is so cheap and very good for bedding for the calves.

“The spring period was tough, especially when you had seven or eight heifers calving per day that really didn’t want to be milked. But, we are over the worst of it now.

“We milked once-a-day (OAD) for three weeks, but we decided very quickly that it wasn’t working.

It just didn’t make sense what we were doing, giving them lovely grass to graze, forcing them to produce milk and then not milking them.

“We were having some problems with somatic cell count (SCC) too. This seemed to settle once we made the switch to twice-a-day (TAD),” explained Ben.

Mentioning what the future holds for himself and his father, Robin said: “Next year, we would like to be milking closer to 150 cows.

“We have over 50 heifer calves there at the moment, so maybe the following year we could be up to 180, but we will see how it goes.

We have a few things we would like to tighten up on before we increase numbers – such as our grassland management.

“A cow to the acre is where we would like to be, but we are in no rush to get there,” Robin concluded. 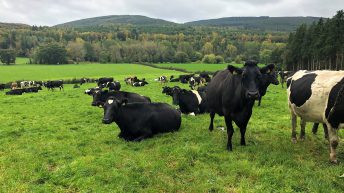