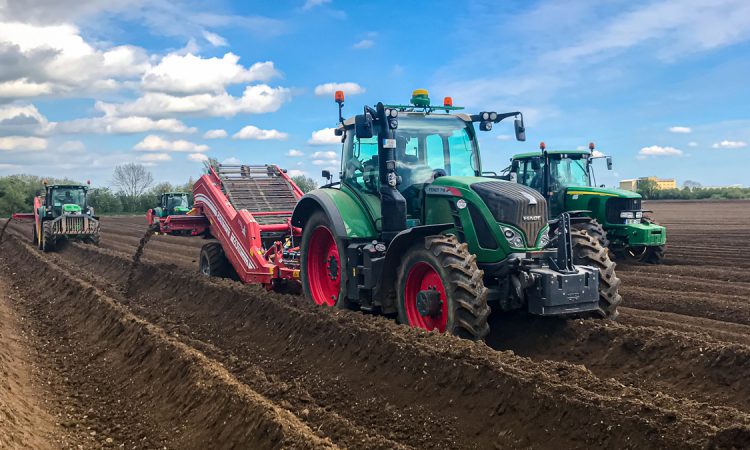 In early May, AgriLand saw the O’Gorman brothers’ ‘Green Army’ at work, planting potatoes in Co. Laois. The video from the story is now one of AgriLand‘s most popular videos on Facebook with over 280,000 views.

It was definitely one of our top reads among the tillage articles this season and we decided to take a look back as a result.

A week ahead of the same time they started planting last year, the brothers were finishing the last of the sowing for 2019 on the first week of May.

Based just outside Castledermot in Co. Kildare, the O’Gormans grow over 300ac of potatoes across three counties – Carlow, Kildare and Laois.

Speaking to Kevin, he said himself and his two brothers – John and Brendan – grew up with potatoes. Their father Martin was growing them since the 1960s.

Kevin, who gave AgriLand some insight into the business, was operating one of two destoning machines working on the Laois/Carlow border.

One quality that was clear of all the machinery operators in the field was patience. There was no shortage of horsepower in the field, but there was no race either as ridging, destoning and planting all take time.

Kevin commented that consumer preference is something that has resulted in huge investment in the potato sector; whether that be in machinery, irrigation equipment or land.

A stone in a drill can cause an obstruction to the tubers growth or a bruise at harvest. Kevin explained: “Everything seems to be about appearance.

Consumer preference is for clean skins and appearance. Years ago you didn’t need any of that equipment.

Rotation is another essential in potato production, which means land needs to be rented. Kevin explained that they try to keep crops within a 10-mile radius of their base.

“We would be prepared to go further; it is important to get the right quality land, especially nowadays. Consumers want clean skins. You have to have good land to get the best quality potatoes,” Kevin explained.

Some land is on long-term lease, but a large proportion of land would come from tillage farmers who want a break crop in their rotation.

“They’re [potatoes] good for the soil. We put a lot of fertiliser out and we probably leave a good bit of it behind as well. It freshens up the ground.”

Finishing planting ahead of 2018 start date

This year, weather conditions have made life easier for planting, following what was a tough season in 2018.

“We started sowing on April 10. Every year, we try to start around the first week of April.

Last year, it was May 15 before we started because of the bad weather. We hadn’t even started planting this time last year.

“For potatoes, you’re better off to wait until the ground starts to heat up before you put them in. They like to get into warm ground and get off to a good start. It probably worked out ideal this year. We just got them in at the right time.” 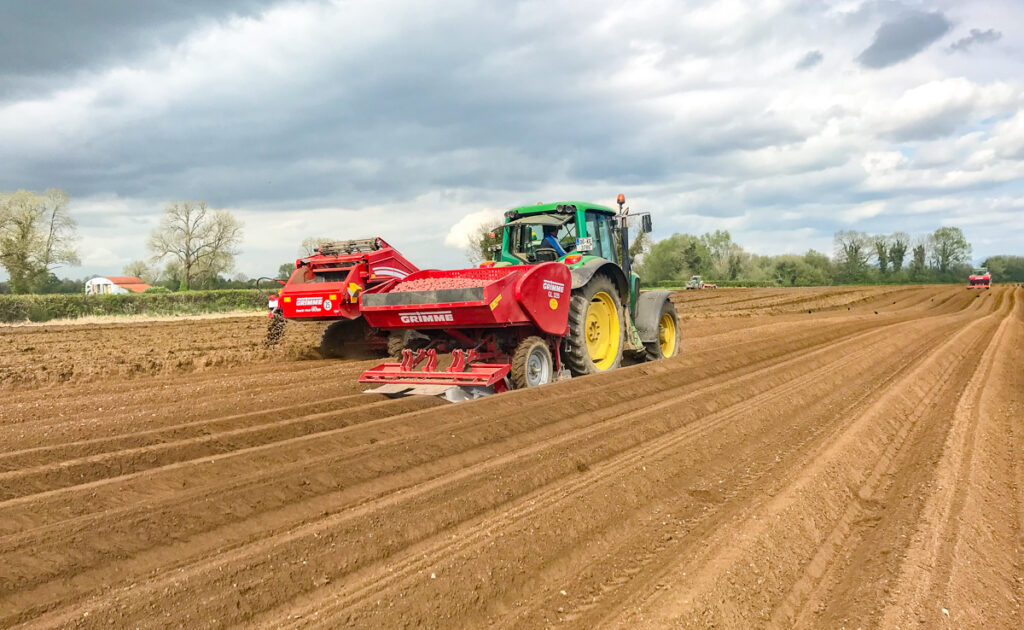 The first of the potatoes planted should appear about five weeks after sowing – which was approximately a week after AgriLand visited.

“We have other potatoes planted that we chitted in the yard. We started growing them in the yard; we put a little sprout on them.

“We were planting them last week. They should be up as quick, in two to three weeks.”

Once the potatoes are in the ground there is no shortage of work. The first of the herbicide applications were due to go on shortly after sowing was finished and irrigation would follow quickly as well.

“As soon as we’re finished planting we’ll probably be out spraying for weeds. Then it will be irrigation. Hopefully, we won’t need as much water as we needed last year.” 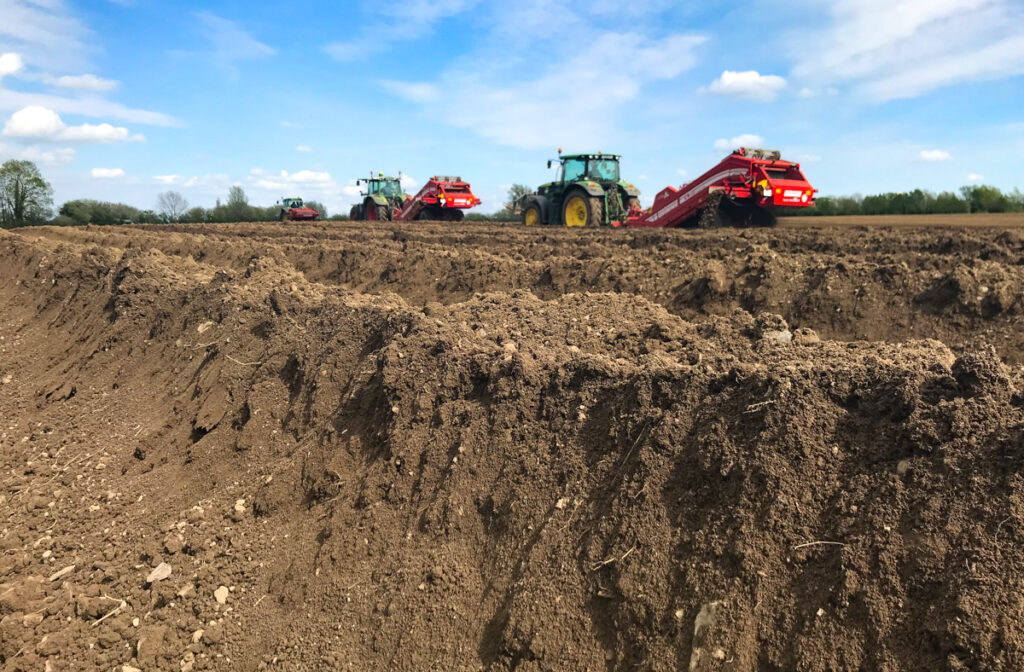 Irrigation…not just for a dry year

Last season, the O’Gormans were irrigating for six weeks without a break. Kevin explained that in a normal year there would usually be five to six days with rain which allows irrigating to stop for a short time.

“We irrigated around two-thirds of the potatoes – anywhere there was water close by. It was a big help having water last year. It was like chalk and cheese between the crops that got water and didn’t.”

In the past number of years the brothers have invested heavily in irrigation equipment in order to ensure a good skin finish.

“The water helps the skin finish. We irrigate every year. We probably put out 15-20mm of water per week and if we get 15mm of rain we just leave it for that week and start again then the following week.

“The most important time for the skins is the two weeks after the potatoes come up and start forming tubers underneath. They’re irrigated for six weeks after that.”

Irrigation generally stops in the middle of July. However, some might be carried out in August to ensure yield is secured.

While last year’s poor weather created a lot of work with irrigation, it did decrease the need for fungicides.

“I’d say we halved the spray last year because there was no blight pressure there. The real hot weather is better than any spray for blight.

“We have a set routine. Once everything goes according to plan we’ll start off with a contact fungicide and then something that moves through the leaf during rapid growth to protect new growth.

It’s a tricky business as when spray is needed to control blight the weather is often not suitable for spraying.

“It’s hard to get out then and spray when the weather isn’t good. You’re nearly finished and you start all over again.” 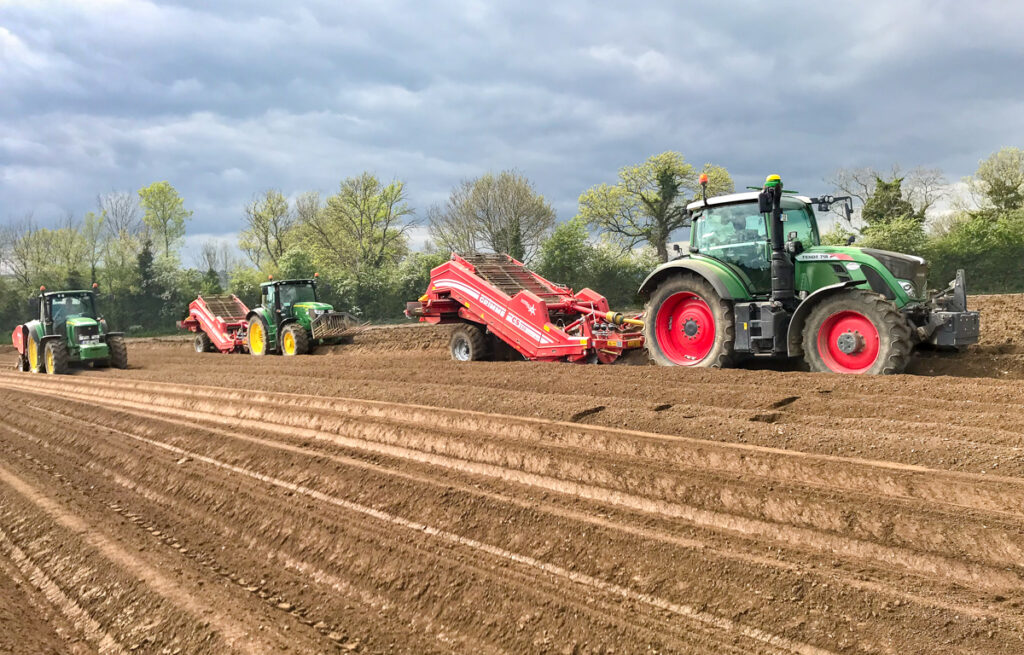 Roosters were the variety of choice in the planter.

“That’s the way demand is gone. We used to grow three different varieties, but it’s all Roosters now,” Kevin added.

The first process in planting is to make ridges. Three ridges are made at a time. The destoner then travels over the ridge and creates a stone-free bed for the planter to work in.

Kevin explained that the destoner places the stone in an alley. The harvester follows the same path as the planter and stones are left either side so that only potatoes come up. 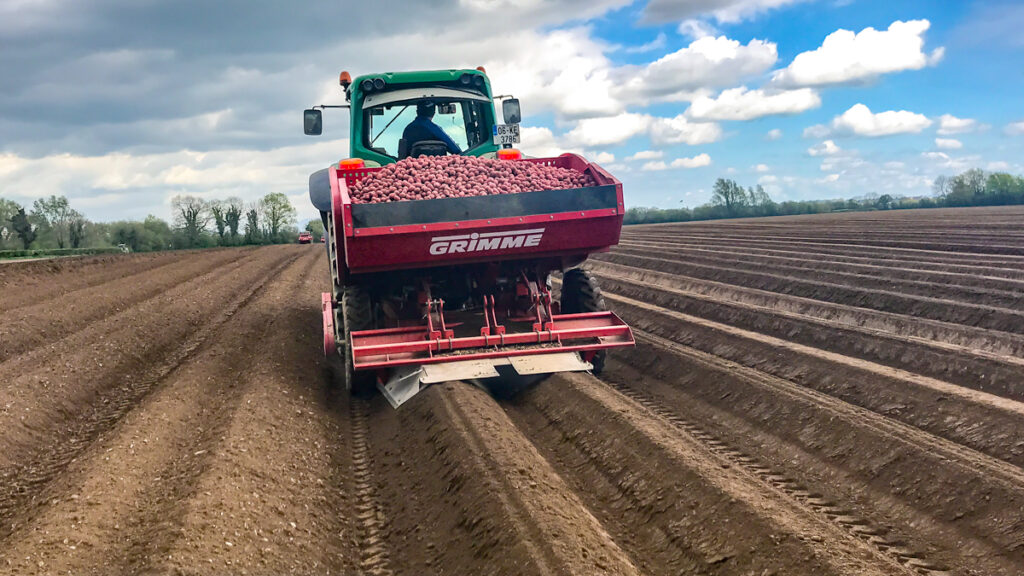 “The reason for destoning is to keep stones off the harvester. Stones cause bruising if they’re moved with potatoes. You get a better quality potato when there are no obstructions in the drill as well. It’s a must.

“We’d be hoping to harvest in early to mid-September and try get out by the middle of October.

“We grow around 500ac of cereals as well. Normally, the rotation would be potatoes, wheat, oilseed rape, wheat again and back to potatoes.”

Kevin added that he thought much of the straw sold last year was too expensive, but he thinks there will be a more modest market this year.

“We’re growing a bit more winter barley as well because we’re hoping the demand will be there from the dairy sector for straw so it might be as profitable as rape.” 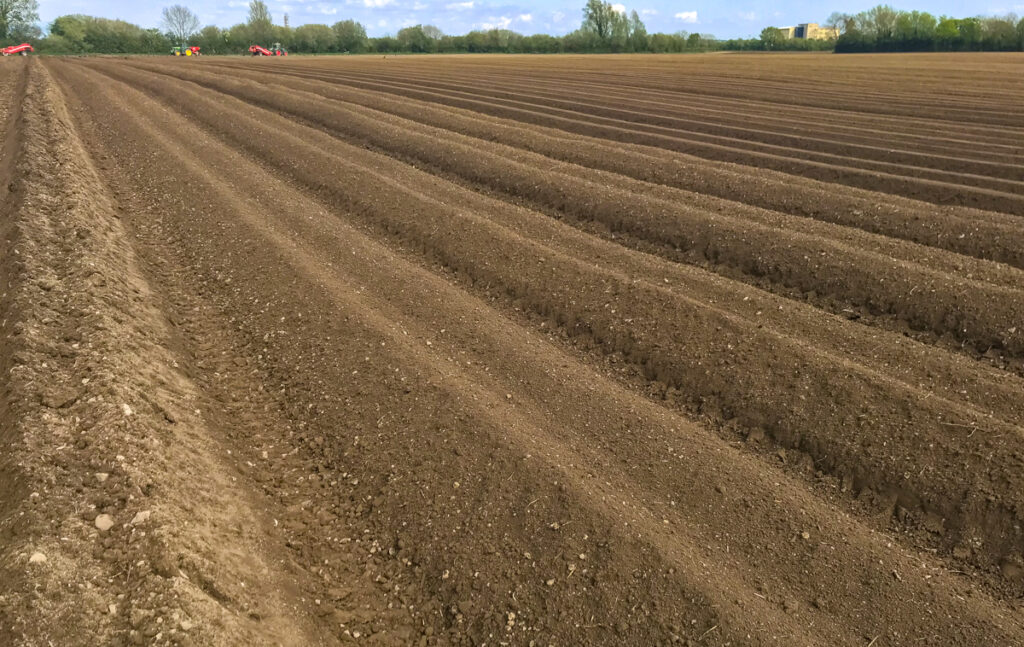 The O’Gormans’ cereal crops are sown by a contractor, as they are busy with potatoes at sowing times.

At those busy times of potato planting and harvest two local farmers join the team. A 300hp tractor is also hired from a contractor – who also provides a driver – to pull the ridger.

The O’Gormans have no use for this tractor for the rest of the season so it stacks up to hire, rather than be over capacity. 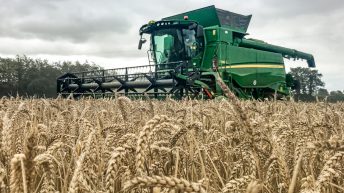 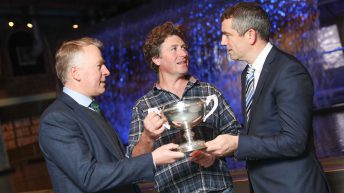