Farming just outside Edenderry in Co. Offaly, Ann-Maree Manley and her father Michael milk a herd of crossbred Shorthorn cows.

The father-and-daughter team operate both a spring and autumn-calving system, which sees them produce milk all-year-round.

Ann-Maree works full-time off-farm as well for AgriNet; however, due to the flexibility of the job, it allows her to keep on top of the work that has to be done on the farm.

Speaking to AgriLand, Ann-Maree said: “My father has been milking cows for many years. The farm has evolved over time, going from milking pedigree Holsteins and Ayrshires to crossbred Shorthorn cows.

“In 1996, we bought our first Shorthorn cow and by 2000 we had converted over to a crossbred herd completely.

“Ever since we changed over, we have been trying to improve on what we have, with the end goal of breeding a cow that can produce 500kg of milk solids.” 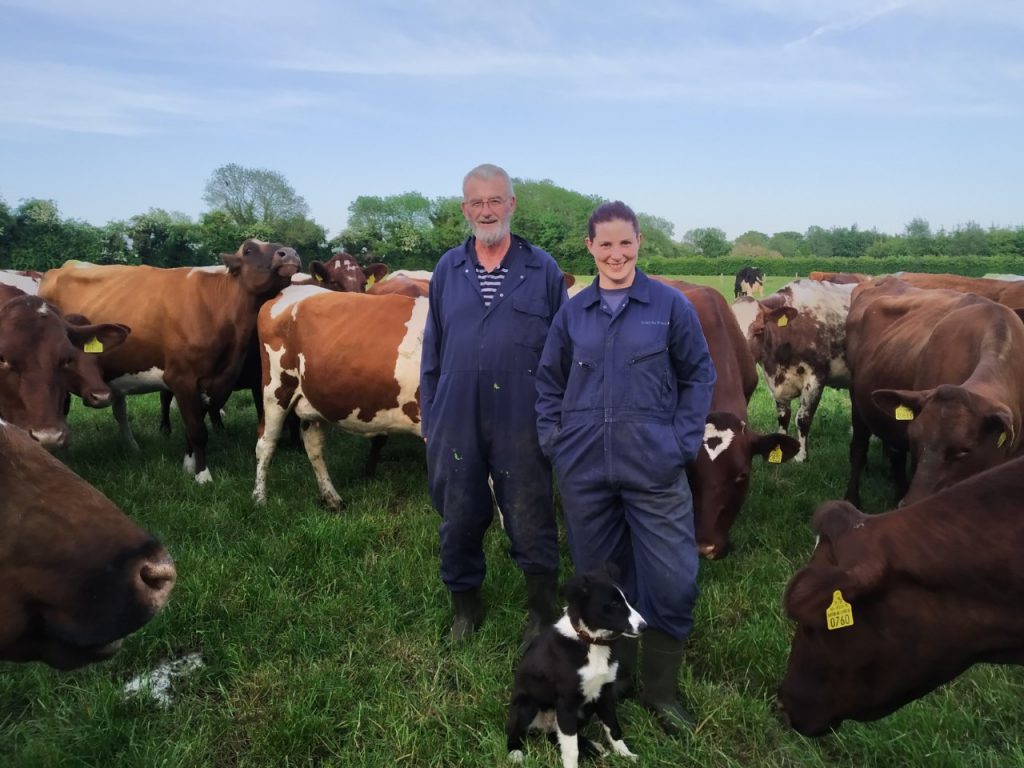 At the minute, 56 cows are currently being milked. The milking platform consists of 88ac of mainly heavy ground.

A further 20ac of ground is rented for silage, which is due to be cut next month.

As mentioned above, the Manleys run a split-calving system, which sees them calve down 40 cows at springtime and 15-20 cows in autumn.

Ann-Maree added: “Typically, we would have more of the replacement heifers born in autumn. Any calves we don’t intend to keep for breeding are sold off the farm at about two weeks-of-age.

“We get a lot of customers who come to the farm and buy the bull calves. We very rarely have to bring calves to the mart.”

Switching from pedigrees to crossbreds

According to Ann-Maree, the main reason for changing from pedigree Holsteins to Shorthorns was down to the land type.

She explained: “The land we have is quite wet; two-thirds of the milking platform would be very heavy.

“It didn’t suit the Holstein cows we were milking, so something had to change. We find that the Shorthorns are much more suited to our land type.

“We needed a smaller type of a cow, that is hardy and still produces good volumes of milk. We feel we have achieved that with the Shorthorns.

Up until 2000, we were predominately milking pedigree Holstein and Ayshires; however, we bought our first pedigree Shorthorn cow in 1996.

“Then from 2000 on, we bought-in pedigree Shorthorns from the UK and a stock bull. So from then on, we built up our herd to what it is today.

“I would say that our herd today is 75% Shorthorn. The goal is to produce a hardy and fertile cow that still produces a large volume of milk like a Holstein would.” 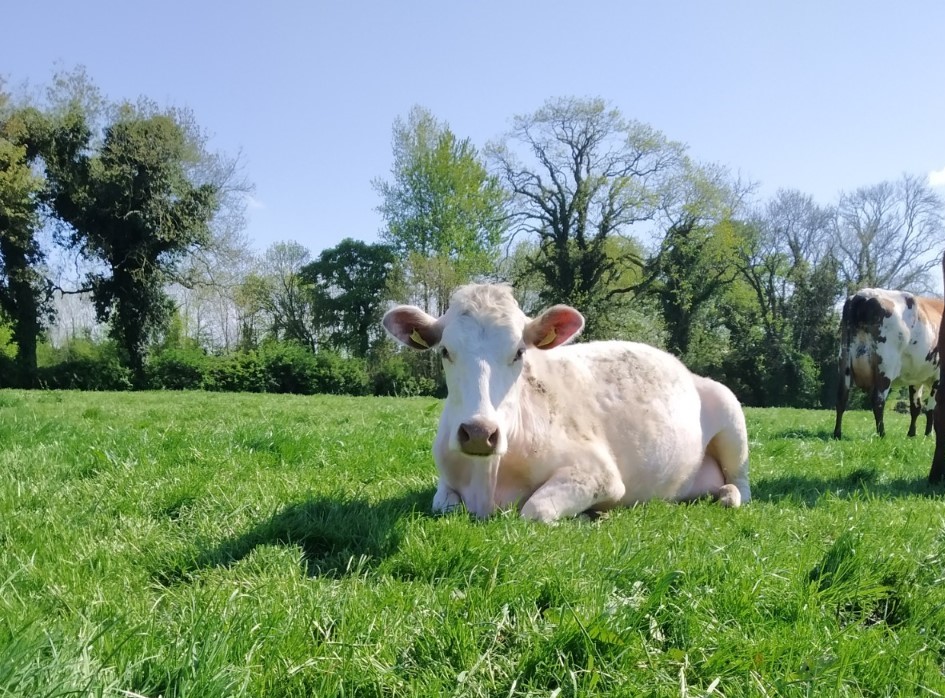 How do you find the Shorthorns compared to the Holsteins?

Moving from pedigree Holsteins to crossbred Shorthorn cows was mainly down to trying to find a cow that suited the land type; however, a couple of their traits also grabbed the attention of the Manleys.

Ann-Maree explained: “The Holsteins didn’t suit the system we had in place. We sort of experimented with the Shorthorns from between 1996 and 2000 and we found that they were a hardy and very fertile cow.

They are very low maintenance compared to a Holstein cow and we find that they require lower inputs. We have had very few issues with them, in terms of trying to get them in-calf; we have very few repeats on any given year.

“They are a more efficient cow for our farm compared to what we were milking previously [Holsteins] and thankfully it has worked out for us.

“We have also noticed that we have less lame cows compared to when we were milking the Holstein cows.”

Ann-Maree said that they are “very selective” when it comes to what cows they breed off.

She explained: “I make a lot of the breeding decisions on the farm. I match up cows with certain bulls.

“I tend to use either Shorthorn, Ayrshire or Swedish Red bulls on the cows we are looking to get replacements from. In saying that, 75% of the cows are predominately Shorthorn. I only have one purebred Shorthorn cow left. There are still a couple of ‘black and white cows’ around yet.

“We are blending different breeds to see if we can improve on what we have. Over the last three years, we have become very selective when picking cows for breeding.

We only breed our top-producing cows based on their milk recording results and their type in general. We would breed our best cows to dairy sires and everything else would get a beef sire.

“Whatever cows we don’t want replacements out of we give them either a Belgium Blue or Limousin straw or run them with the beef Shorthorn stock bull that we purchased last year. The heifers are served with an Angus bull.

“Because we are so selective of what we breed for replacements, we end up rarely having any surplus. We only give 15-20 cows dairy AI, so we only end up with six or seven replacement heifers, which is just enough.

“We breed what we want and if it’s a case that we have extra we will sell them.” 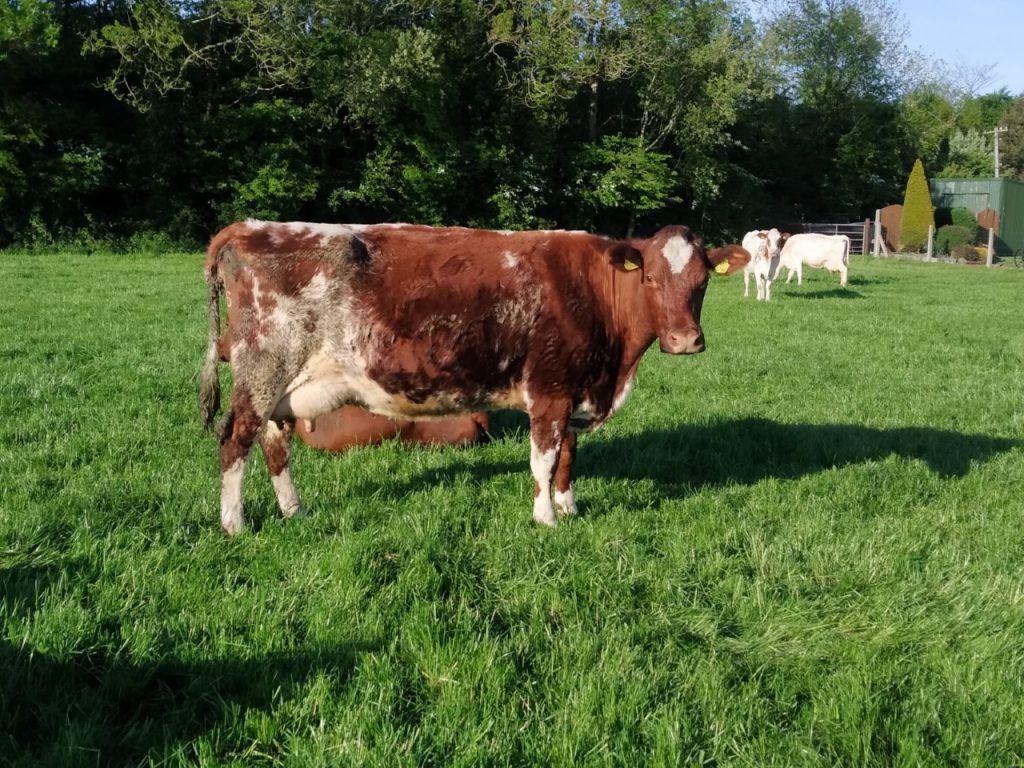 The breeding season commenced on April 12. However, plans got underway all the way back in February.

Ann-Maree explained: “I sat down probably in February when we got the Irish Cattle Breeding Federation (ICBF) report out with the results of the value of the cows’ milk production for last year.

“I evaluated and identified the top cows for production and looked at what they needed. For example, more solids or volume.

The mature cows, that were picked out to get a beef sire, would be matched up with a Belgium Blue sire mainly.

“Obviously, the heifers would get an Angus bull, just so that they calve down with ease. If a cow repeats and she is a good producer, I’ll give her a second round of dairy.

“And if any cows aren’t hitting the mark that I expect, then I’ll give them a beef sire.” 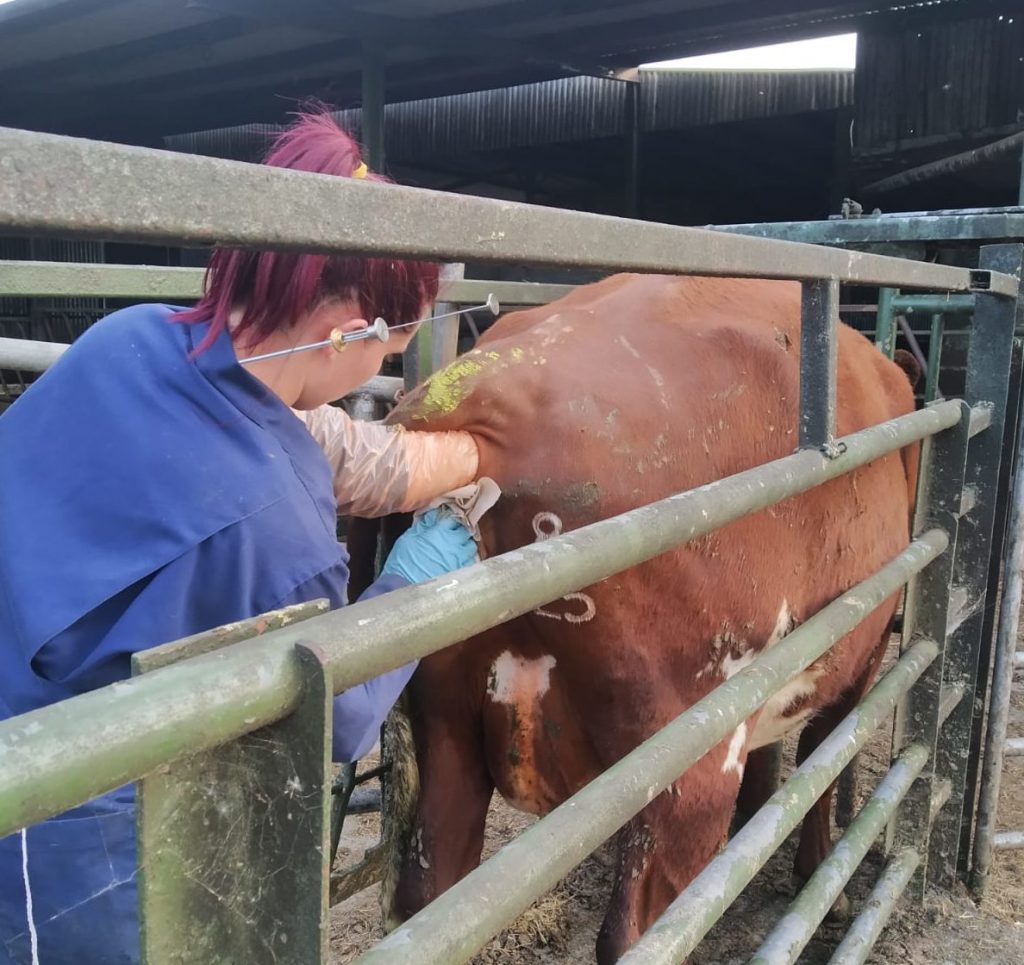 She added: “The Shorthorns can be a bit slower to mature. A lot of the heifers in their first lactation might only do 333kg of solids, on average.

“So, in their first two lactations, they ‘might not light the world on fire’ in terms of solids, but they will go on to produce eight or nine calves and they will eventually get up to that 500kg of solids. It sort of balances out that way.

Getting back to the breeding season, we do six weeks of AI. The first cow was served on April 12. I carry out all the breeding myself.

“We recorded any heats through the HerdApp and we tail-painted the cows. The initial plan was to scan the entire herd; however, our scanning man wasn’t able to come out and scan the cows until May 1, by which stage we were over two weeks into breeding.

“We got him to scan the cows anyway when he did come out, including the autumn calvers and thankfully everything came back clear and none of the cows needed a washout or CIDR.

“The plan is to let the Shorthorn bull out early next week to ‘mop up’ any cows that haven’t gone in-calf yet. He will be left with the cows for six weeks.”

Ann-Maree was able to give an insight into how the herd is performing, after getting a hold of milk recording results that were taken last month.

She added: “The top-producing cow did 47L at 2.88kg of milk solids. On average, the herd was doing between 30L and 40L of milk about a month ago.

The autumn calvers were beginning to tail off. At that stage, they were doing about 20L – on average.

“The fat and protein averages were about 3.7% and 3.3% respectively. They are going well; we would like to increase the protein and we have noticed that the butterfat has dropped off slightly.

“It’s a work in progress; cows are getting a 13% nut at a feeding rate of 4-6kg, along with good-quality grass. We are nearly there on the breeding side of things, so I suppose the next step is to improve on the nutrition aspect of it.” 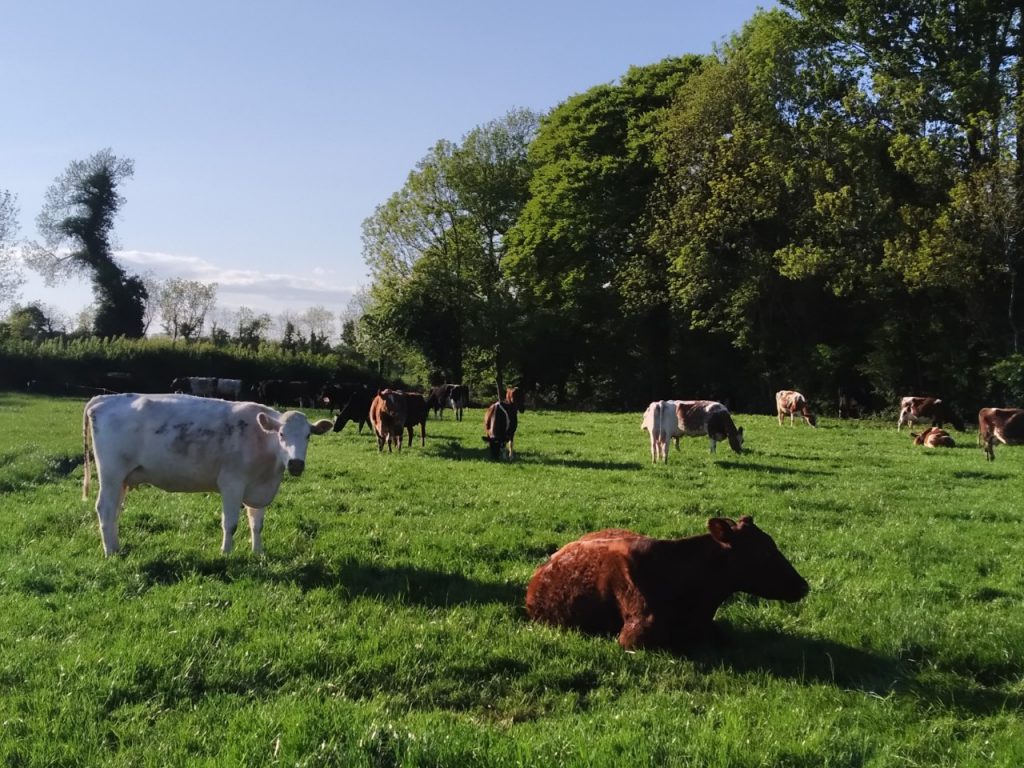 As mentioned already the grazing platform is quite heavy ground, which during a bad year, makes life difficult for the Manleys; however, due to the dry conditions lately, the land has never been better, according to Ann-Maree.

She added: “This is typically a wetland farm. Two-thirds of it would be made up of a dark-peaty soil. However, this year, because it’s so dry we have been able to graze those heavy-paddocks out very well in comparison to other years.

“I don’t measure grass and I don’t do a rotational planner. I generally get out and have a walk of the farm and see what we are like for grass.

“We took out some paddocks last week for bales that had gone a bit strong and I hope to take out another one or two in the next week or so.

We have a nice bit of grass here at the minute. There’s easily two weeks of ‘nice grazing’ ahead of the cows. However, regrowth is relatively slow and drier parts of the farm are struggling a bit.

“Typically, we let cows into pre-grazing covers of 1,800kg DM/ha or even a bit more. I can’t afford to go too mad taking out paddocks as regrowth, as I said, is fairly slow.

“On a normal year, the cows wouldn’t clean out the heavier paddocks as good as I would like and I would end up having to go in with the topper after them; however, this year has been the exact opposite.” 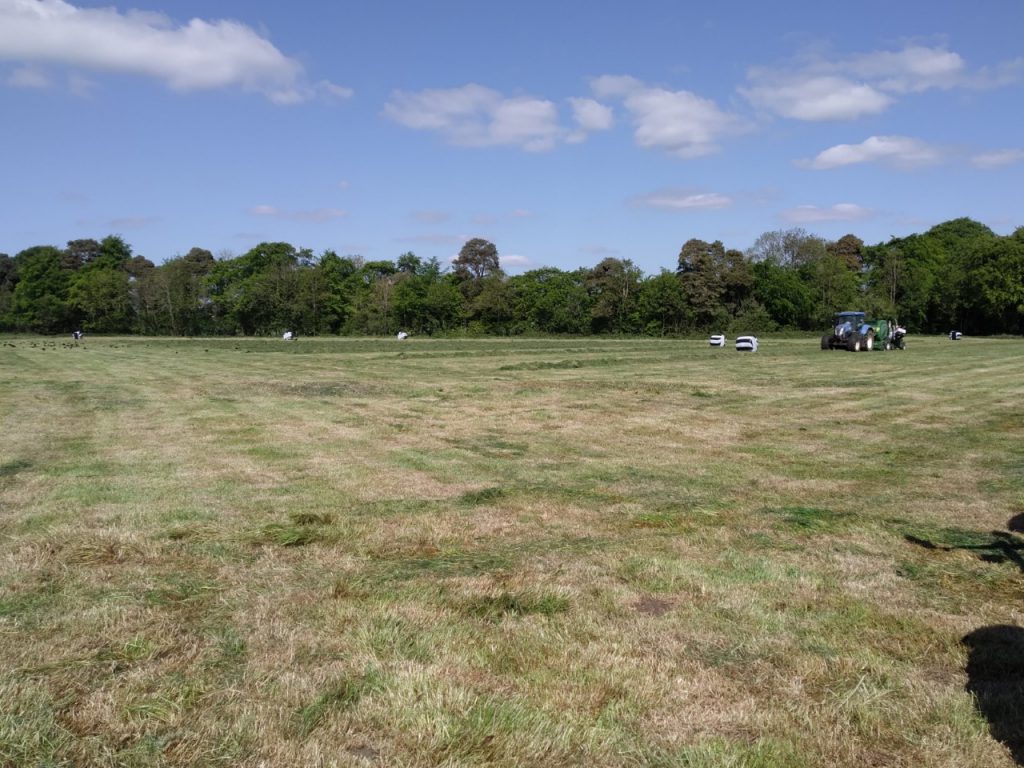 Global dairy markets: ‘Steady as she goes’ according to AHDB

Global dairy markets: ‘Steady as she goes’ according to AHDB