The Clare natives milk a herd of 139 Holstein-cross British Friesian cows, along with a pedigree herd of Charolais and Limousin cows.

Joe’s father JJ has been milking cows all his life. He was in partnership with his brother, Dan, for many years. Up until roughly 2014, 60 cows were milked through a six-unit parlour.

Joe who came back into the fold on a full-time basis – 10 years ago – was determined to expand the dairy side of the business along with his father. This, in turn, led them to installing a new parlour and a cubicle house.

Speaking to AgriLand, Joe said: “My father built up the farm to where it is today. The success we have had with the pedigree enterprise over the years has allowed for us to develop the dairy enterprise further since I came back full-time.

In the early days, when my father and uncle were in partnership, the pedigree end of the business would have been the main enterprise on the farm.

“They had great success with Charolais, Limousin and Hereford cattle down through the years, while at the same time they would have been milking a steady number of cows as well.” 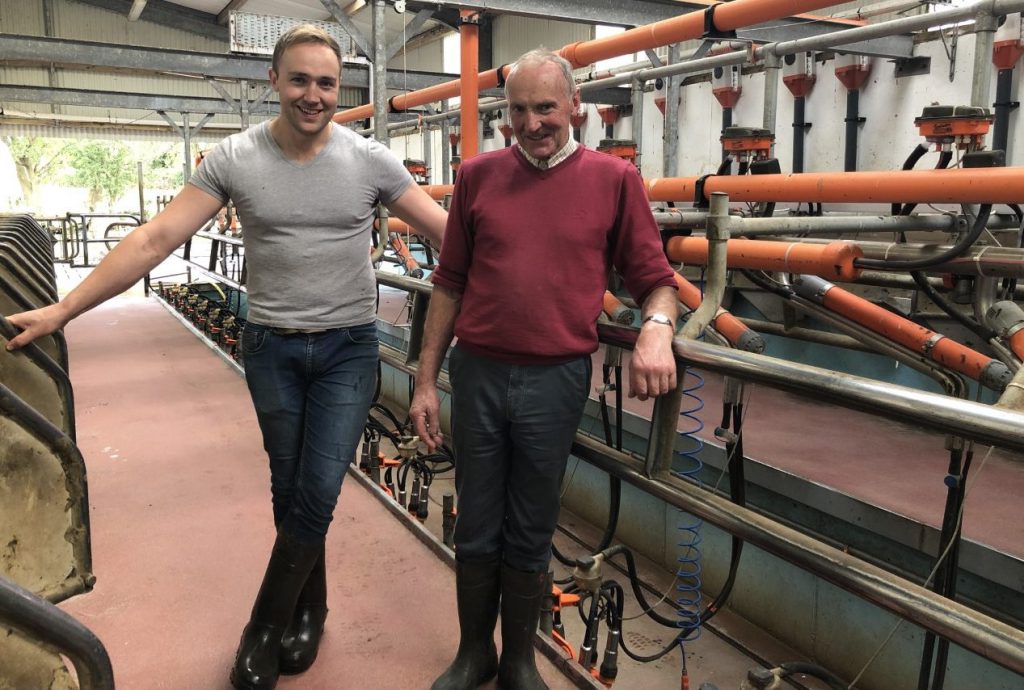 ‘Going up through the gears’

In 2015, the Melodys were milking 75 cows and since then they have “gone up through the gears” and are now milking 139 cows; however, the hope is to push that on again and milk around 160-170 cows in the near future.

Explaining the expansion of the dairy enterprise over the last few years, Joe said: “We bought a lot of breeding stock, from a local farmer, such as in-calf cows and heifers, as well as breeding our own replacements.

We’re running the farm so that we’ll be running deficits rather than dealing with surpluses. This farm is a very ‘early farm’. Cows are out grazing grass in late January, day and night.

“So we will look to maybe milk a further 20-30 cows next year. We have an outside block of 260ac, which we can zero-graze, which helps to take the pressure off in times of drought or when the weather is wet.

“So in times of deficits, instead of running up our meal bill we will get a contractor in to zero-graze the outside block.

“We try to keep our meal bill low and try to maximise the amount of grass going into the cows’ diets as we have the land capacity to achieve that.

“The milking platform is just over 40ha, so we are well-stocked. At times when we would be reseeding, we would be stocked up as high as four cows/ha.” 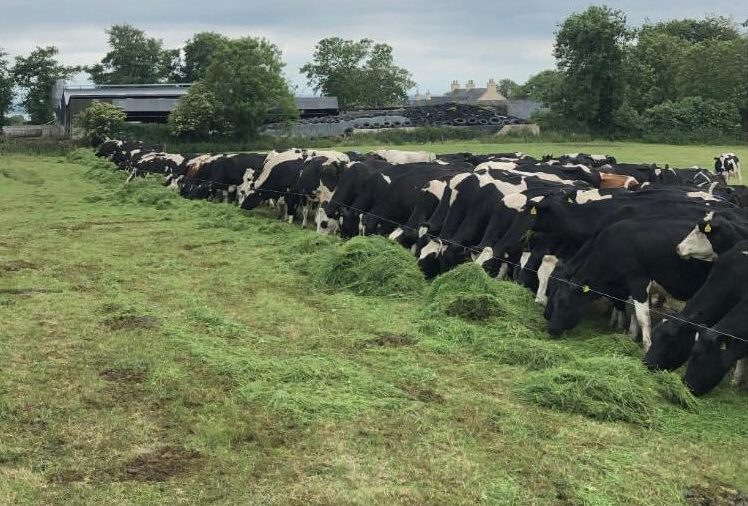 Joe said that his father always believed in reseeding and, because of that, the farm was in a good position when the expansion of the dairy herd took place a few years ago.

Joe said: “My father was always very anxious ‘not to run out the ground’. That meant that the farm was always kept in fairly good nick.

“In saying that, it would have had to been pushed a bit to grow that bit more extra grass, so I suppose we have increased the amount of reseeding we have done over the last few years.

When we started expanding the dairy herd, I’d say we would have been reseeding about 15% of the ground for the first few years and now I’d say we are doing about 8% a year.

“My father’s motto was always to spend money on breeding stock and/or on grassland; we were never big into machinery on this farm. That was something that he would have tried to instill into me.

“I wouldn’t have a tractor in the morning if I didn’t need it. We contract in nearly everything such as fertiliser, silage and slurry. All we do really is feed the cows ourselves during the winter and do a small bit of mowing.” 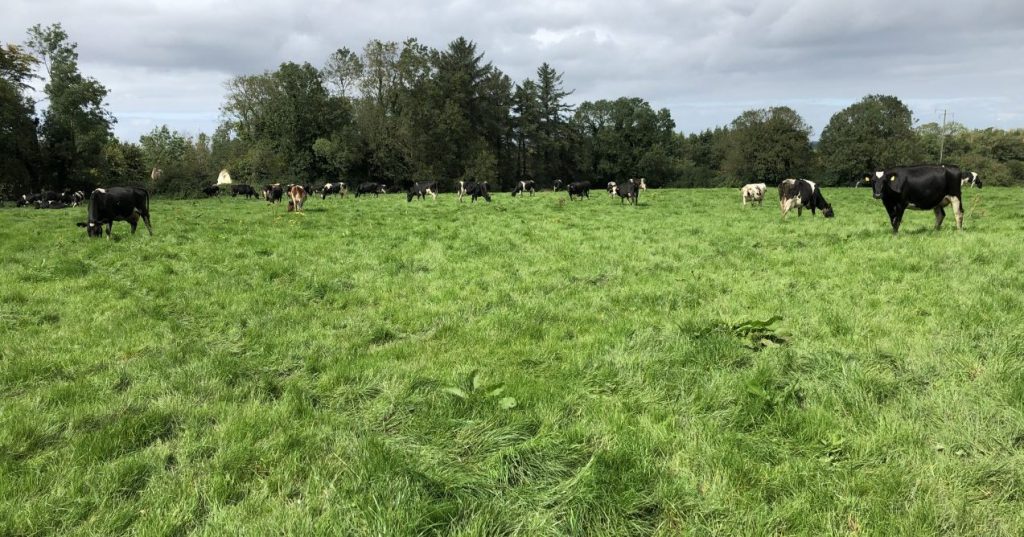 Over the last six years, as already mentioned, a new parlour (16-unit) and a cubicle house were built to facilitate the increase in cow numbers.

Joe explained: “My father and uncle would have been milking up to 110 cows at one stage through the old six-unit parlour that we had.

“However, in order to do things right and efficiently, we decided to install a new parlour and a 10,000L bulk tank.

Since then, we have been adding on in phases throughout the rest of the farm. In 2018, we put in a 55-cubicle house; however, we are still not where we want to be in terms of animal housing, on the home farm, but we intend to keep adding on bit-by-bit.

“We have plenty of accommodation on the outfarm for up to 250 cattle, so that is where we keep all of our drystock; it’s not really suitable for the milking cows.” 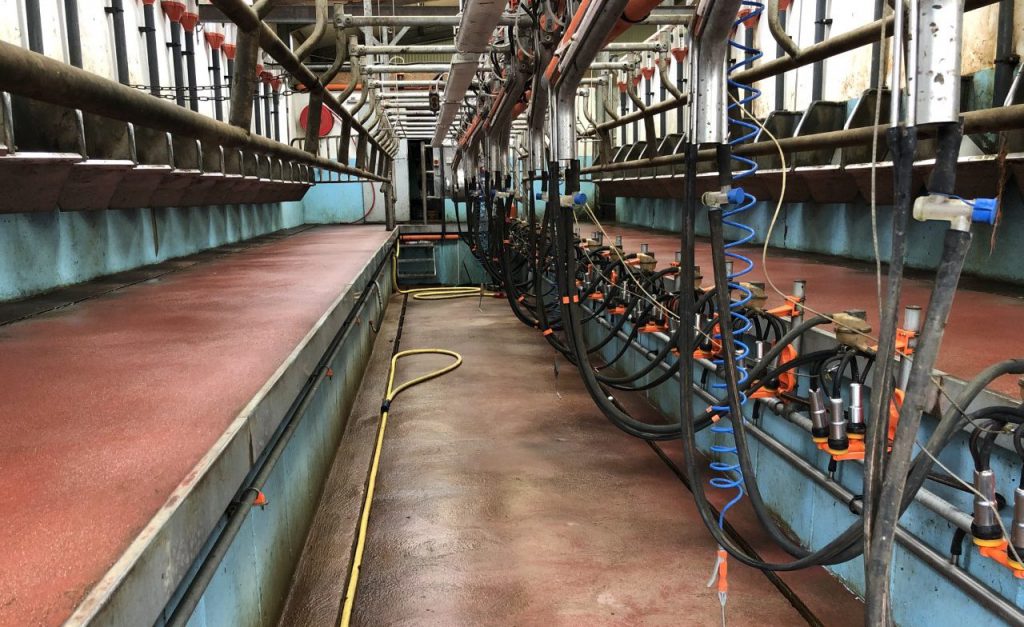 Joe explained that the winter housing period is quite short on their farm and that some cows only end up being housed for two months.

He added: “The winter period is relatively short here and there tends to be a lot of work involved in it, so I suppose to take the pressure off we put our outblock to good use.

“We have started to reduce the number of beef cattle we keep on the farm and last year say, by the month of August, we would have had all the beef cattle that we generally sell, off the farm.

So, in order to utilise the grass out there, we would give it a break for a while – from August to October – after the beef cattle left and then dry off a bunch of cows a small bit earlier for example, some of the heifers in November, and move them out to the outfarm until Christmas week usually.

“Then the following spring, beef cattle would be let back out there in spring and be gone off it again in August.

“The ground is relatively dry out there so it holds up well during the winter and, in a nutshell, it helps to reduce our feed costs during the winter; we have found it has worked fantastically and it’s been a big driver in profits for us.” 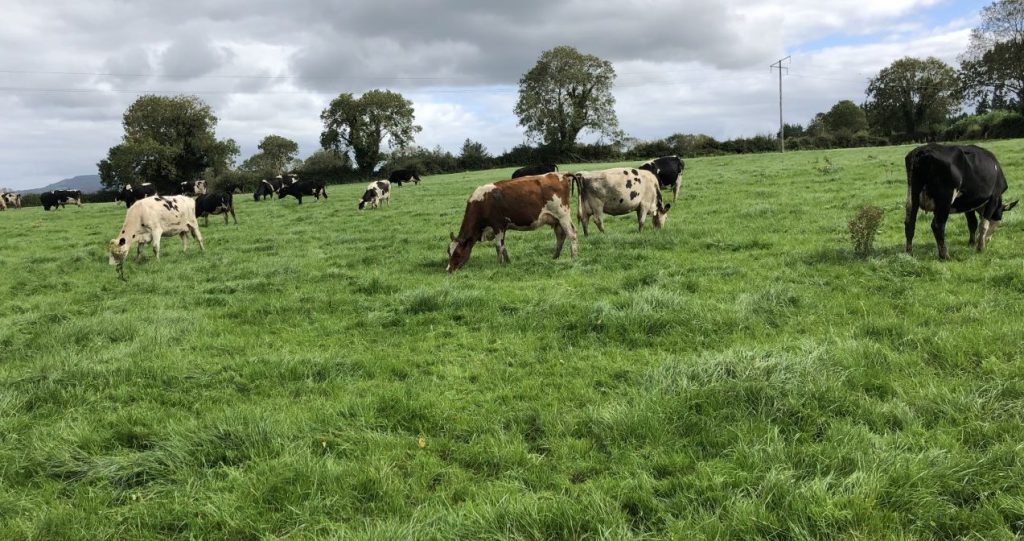 Joe went on to talk about the performance of the milking herd and how that, year-on-year, progress is being made to achieve the overall target of trying to breed a cow that produces 500kg of milk solids.

“Our milking season is quite long. The bulls we pick are short gestation, which is very important for us. With an expanding herd, days in milk is what drive profits for us.

“The cow calving in February, she’s going to win the race because she’s going to produce the goods and more of it [milk]; she has a big headstart on the April-calving cow.

“Days in milk is what is important to us at the end of the day. The overall aim is to breed a cow that will produce 500kg of milk solids. Also, we work hard to keep our somatic cell count [SCC] low, which it is, so that’s a help as well.” 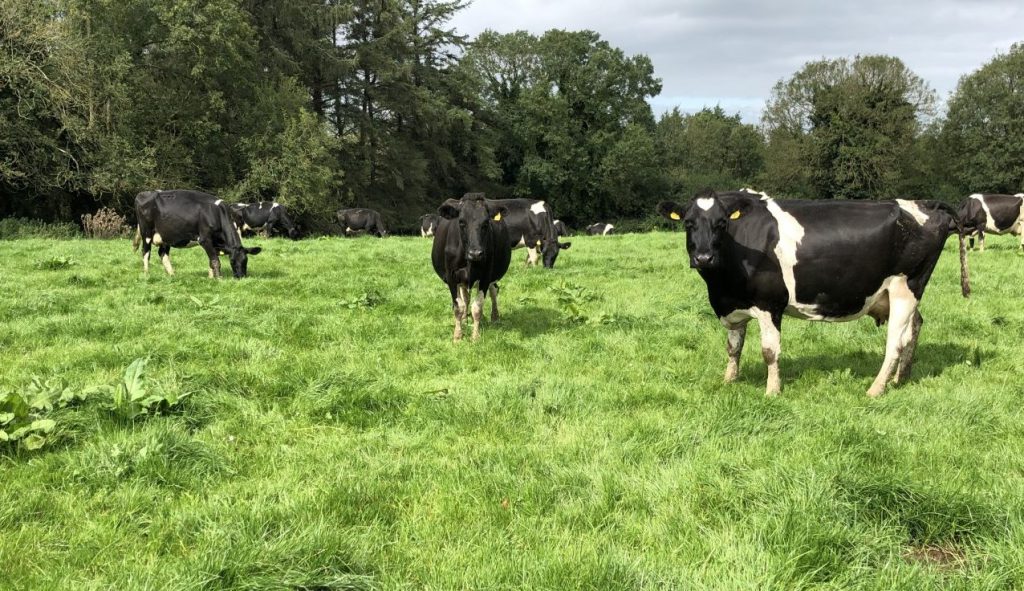 On the day of AgriLand’s visit, Joe and JJ were set to get their herd of cows scanned to see how successful the 2020 breeding period was for them.

The breeding period began on April 27 and finished up around the end of July. Joe AI’d the cows himself before letting a bull run with the herd to ‘mop up’ any cows that didn’t hold their serve.

On the day of the scanning, eight out of 139 cows were not in-calf, which represented an empty rate of 5.9% – which the Melodys were very happy with.

Calving looks set to begin for the duo in late January of next year, which is exactly what they were hoping for. 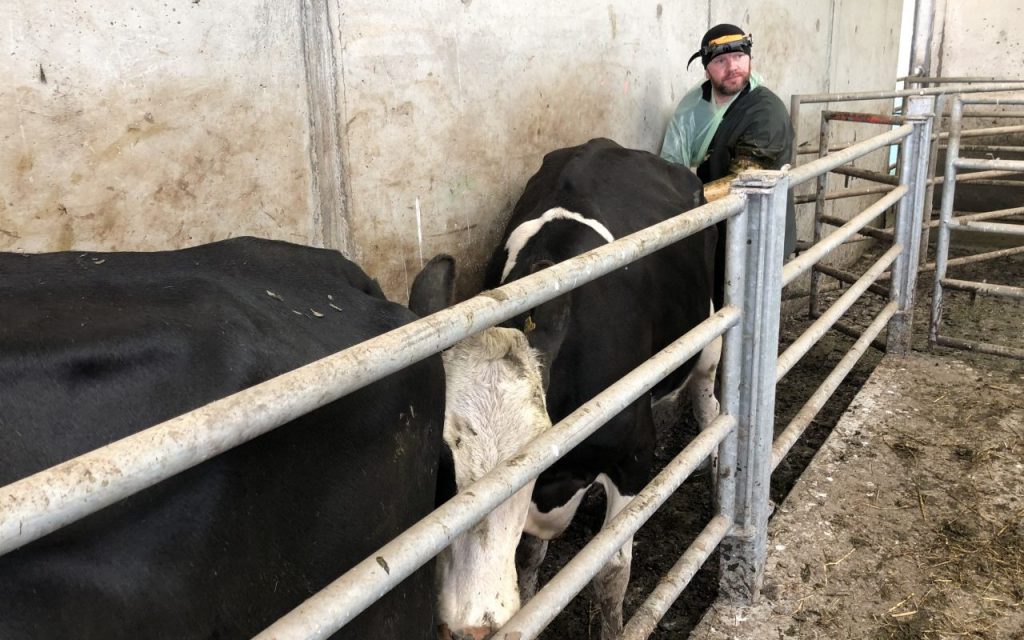 Enda Kearney scanning the Melodys herd of cows during the week

Even though the dairy herd is the main enterprise on the farm, both Joe and JJ still, and always will, have a love and passion for pedigree breeding.

Joe said that the only reason that they are able to do what they are doing today on the dairy side of things is because of the success of the pedigree enterprise over the years.

He added: “Although the dairy enterprise is the main enterprise here, we are still trying to keep our hand in the pedigrees.

There’s a love for the pedigrees there from me and my father still. We would have done well – along with Dan – over the years at shows and sales and we would have won many [prizes] with our Charolais and Limousin cattle.

“We have exported cattle to the UK and built up good relationships with farmers and we would have a lot of repeat customers.

“We have 15 pedigree Charolais cows and five Limousin cows. Back a few years ago, when the pedigree enterprise was at full throttle, my father and uncle would have had up on 170 cows, so we have scaled down quite a bit.

“We generally calve them down around March, when the bulk of the dairy cows have calved. 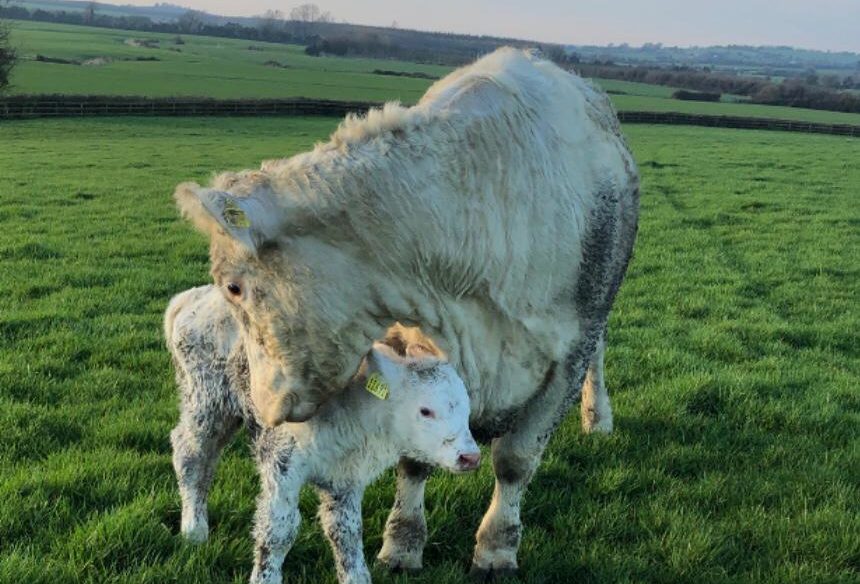 “We sell the majority of the Charolais bulls from the farm here – there’s a good market for them; while we generally would go to the sales with our Limousin stock.

“By going to show and sales it helps to keep our name out there because the smaller you get the easier it is for you to be forgotten about.

Really and truly, you have to be at the top-end of the pedigree game to make money out of it. The middle to lower bracket of the pedigree market is dead in the water as far as we are concerned.

“You’ll sell a top-end bull now as easy as you would 20 years ago; however, the middle to lower bracket market is gone.

“We’ll continue to keep the pedigree herd going; it has been good to us and we got to such a level that it would be a shame to get rid of it or lose it.

“Dairying is a great way of making a living, but the pedigree side is a great diversion away from that – it’s nearly like a hobby for us now.

“At scale, there is as much work involved in the pedigree enterprise, if you do it right, as there is with running a dairy herd; it’s just dairying is more of a stable and viable enterprise to be running at the moment and that’s why we expanded dairy cow numbers instead of keeping a big herd of pedigree cows.”