Dairy conference: ‘Two-thirds of expansion has come from greater efficiency on farms’

About two-thirds of the extra milk solids – that we are now selling – has come from greater efficiency on farms, or produced from the same amount of land.

This is according to Teagasc’s head of dairy research, Padraig French, who spoke at the Teagasc National Dairy Conference held in Killarney, Co. Kerry, yesterday, December 3.

During his presentation, Padraig displayed some data which compared some pre-quota reference years, 2007 to 2009, with the past three years, 2017 to 2019.

Looking at the figures, overall there has been a significant increase in cow numbers – by 35% – and an increase in milk output – by 55%.

Likewise, fat and protein have improved; driven, he said, by improvements in genetics and a longer grazing season.

“When this is combined, we are seeing an increase in milk solids by 65% and an increased milk price by almost 20% or 2.9c/L; however, this probably only kept us just ahead of inflation,” he added. 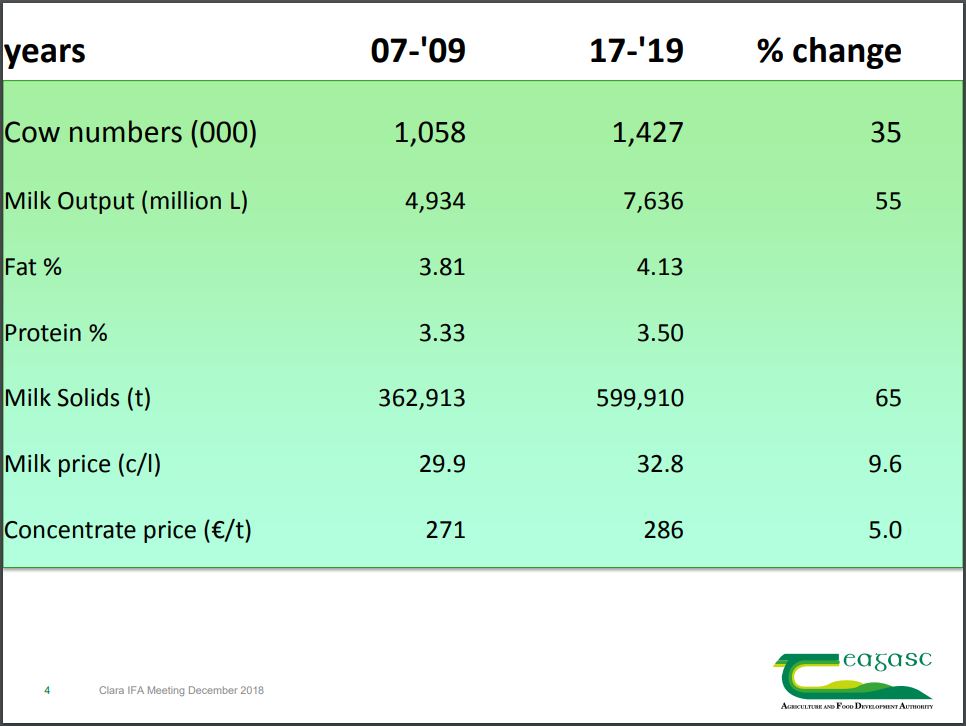 When he looked at this at farm level – on the average farm – cow numbers went up from 54 cows per farm to 77 cows per farm.

“But where has all this extra milk come from?” he stated.

“There has been a 13% increase in stocking rate; but also significantly we saw a 16% increase in grass utilised.

What this tells us is, that these extra cows on the milk platform were fed from more grass grown. So we are growing more grass on our farms and our cows are consuming more grass per cow.

Taking into account the cost of these extra cows, on farm, he said: “They are costing in the region of €4,000/cow.”

When the investments to accommodate these extra cows are taken into account, this equates, he said, to an investment of about a €100,000 – on your average farm.

However, he highlighted that our debt levels have in fact only gone up “by about €15,000”.

This implies that a lot of this investment has been out of cash-flow. So our dairy farms are a very sustainable economic business at this stage.

Although he stressed that the most important thing for the business is net margin.

“Produced from the same amount of land,” he added.

‘What have we learned?’

“Dairy expansion has been really successful. It has increased farm income and has generated about €1 billion/year spread throughout rural Ireland,” he stressed. 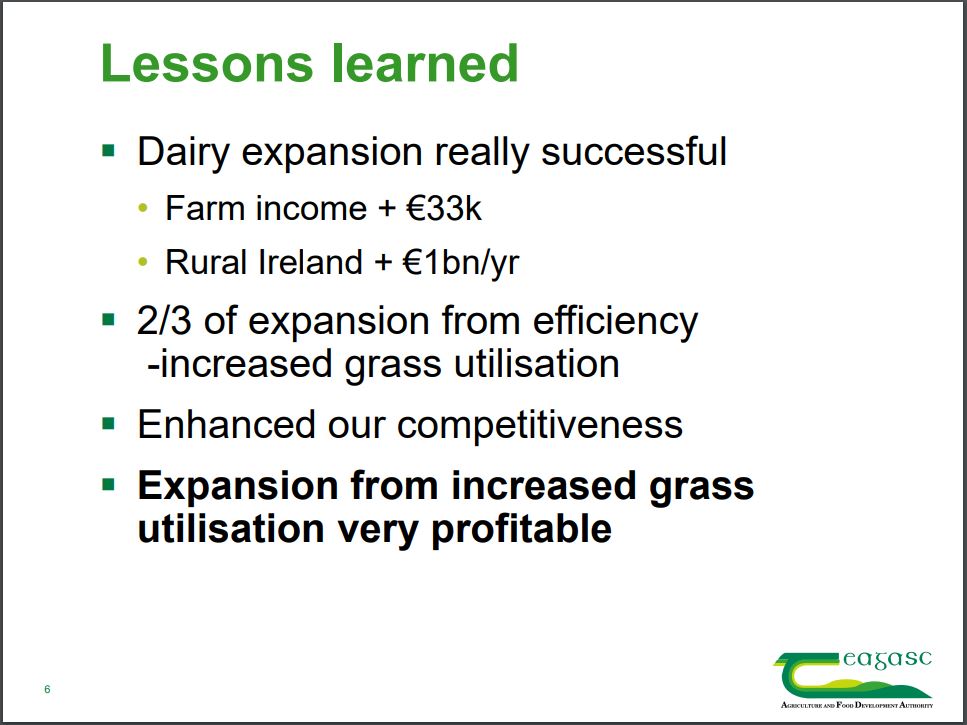 “So, when you look at where we are now, compared to our competitors, we are in a much stronger position today, than we were 10 years ago.

“The one lesson we can take is, expansion from increased grass utilisation is very profitable,” he concluded.